Aunt Fay was fiercely devoted to her home. According to Aunt Fay, there were two careers open for women: teacher and nurse. In both cases, these were careers that gave you enough flexibility to keep a proper home and raise a family. Then the 60's and 70's came and the world whirled. Teen adolescents could dream of being anything. But Aunt Fay was adamant. You want work that allows for family. Aunt Fay claimed to want the simple life and I believe she did. She never veered from her childhood home. She visited Italy because her husband's family still lived there. But she was never going to winter in Vegas or Florida or Arizona. She liked being home. I was touched when she made the trip to Minnesota for my wedding. (Pictured below: Aunt Fay in pink, then that force of nature - my Aunt Rose and then my Aunt Annette.) Aunt Fay was not a traveller. 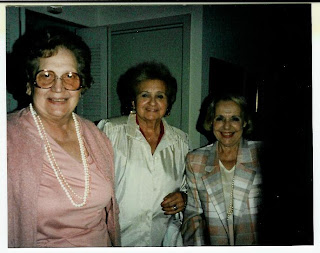 When I visited New York with husband and kids in tow, there were appetizers, dinner, wine and she invited the family for a huge dinner so I could see everyone at once. When I awoke in the morning, she had already done her 30 minutes on the bicycle in the basement, scrubbed the floors on her hands and knees and had the laundry going. And she was in her 80's! She was prepared with brown coffee or black and some morning biscuits were always nearby.

Nobody could accuse her of being "easy going." She was capable of holding a leg-of-lamb (perfectly cooked) over the garbage can - threatening to throw away Easter dinner because someone was late and the lamb was now too well done to serve.

When, my family had arranged to go down the block to visit Aunt Rose for a night, Aunt Fay wouldn't hear of it. We had already dirtied two sets of sheets. Did it make sense to go two blocks away and dirty two more sets?

Growing up, when she uttered the exclamation heard in many Italian families, "If you do that again, I'll cut your heart out!" - you believed her. And someday, I will relate the Easter "mutton" story.

It is a wonder then that she supported my career choice of "actress" and never did refer to it as "one step off of the street." She was hugely indignant when she found out an actress in her favorite soap opera who was playing an Italian woman - wasn't Italian! She insisted I go straight to the casting director and offer them my services because at least I was Italian! She was sure the other actress would be instantly fired and they would recast with me.

That's the support you get in an Italian family. We may (and do!) war at each other and get our noses out of joint, hold a leg of lamb over the garbage pail, throw out flowers and complain about dirty sheets, but when it comes time for the world to take a peek at us - we present a united front.

Last New Years when I was in New York with my family, my cousin made some stuffed mushrooms - Aunt Fay's recipe. My daughter - who is adept at picking mushrooms out of appetizers, soups, salads, etc. had ten! 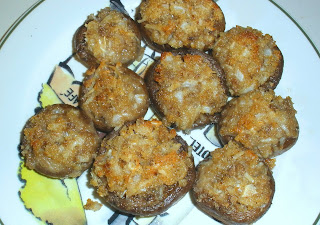 I asked my cousin for the recipe - and I got the typical answer: onions, breadcrumbs, olive oil, mushrooms - do it to taste. And mince the onion really fine (mine are never as fine as Aunt Fay's) - you can see some gawky strips sticking up this way and that - they are my errant, dishevelled mushrooms - but they always get eaten. The lamb may hover close to a garbage can. The mushrooms never do.

So without further ado: a typical Italian recipe:

Wipe some button mushrooms with a paper towel. Take out the stems. Chop "some" of them and put in a bowl. Add "some" bread crumbs. Add "some" minced onion - chopped very, very, very, very, fine. Ignore my picture and chop them finer. Add "some" oil - just moisten. Stuff the mushrooms. Bake in 350-400 F until they are cooked. (You'll know when they're cooked. You have to - because that's all the directions I ever had.) And you know what - you do know.

I've done sausage stuffed mushrooms. Sometimes I add cheese, garlic, Italian parsley. I change at whim. But there are times when you just want the vegetable, some bread and some oil - the simple stuff. And people gravitate to it. I'll make them for my family on a snowy Sunday - just because. Or I'll turn out a whole tray at a family gathering. I've never had to throw one out. Simple always works.

My daughter picks mushrooms out of everything, too! I'm going to try these...and we'll compare notes!

My daughter actually loves mushrooms so she would definitely love these!

Oh let me know - because my non-mushroom daughter loves the simpliity of these.

These mushrooms must taste delicious! A great idea!

Cheers and have a nice weekend,

Simple is the best. I love stuffed mushrooms and Aunt Fay's recipe is great.

I love stuffed mushrooms, and I bet these are so tasty! I love the photo of your aunts!

Aunt Fay sounds like an AWESOME lady. Wow, what a riot! With such a big heart and such a big personality, how could her food not reflect all of that?! No wonder these stuffed mushrooms are so amazing. They certainly look and sound delicious.

That's such a lovely story! And I love the realness of your recipe!

i am not a big mushroom fan, but the stuffing sounds amazing!