Thank-you! I appreciate you. 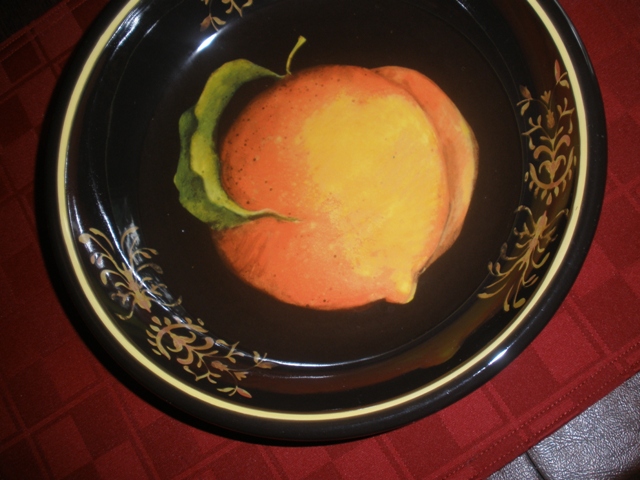 I want to thank you all for kind messages of support and sweetness regarding the passing of my mom. They were - are - very appreciated. I will be filling the pasta bowl again and resume visiting you around Labor Day. My sister and I have much to do before her memorial gathering at the end of August.

Not a lot of cooking is going on. Last week one of my dinners consisted of two brownies. Two days ago, I had a pound of grapes for dinner. Macaroni and tuna salad sits in the fridge for those who need to grab and go. I am considering two ears of corn for dinner tonight. It is mighty fine, just-picked Minnesota sweet corn. I am looking forward to that.

In true "life goes on and so does the show" -  my eves are devoted to Under the Midsummer Moon at the Minnesota Fringe Festival August 2-12.  165 different productions in 15 theatres.  We open Thursday, August 2 and it has been a joyful distraction to be working with my amazing staff and cast on this labor of love.

I need tissues at rehearsals - and I wonder why - I know what is happening! I wrote it! But the young performers have shown such grace and commitment - that I am transported every eve into their world. 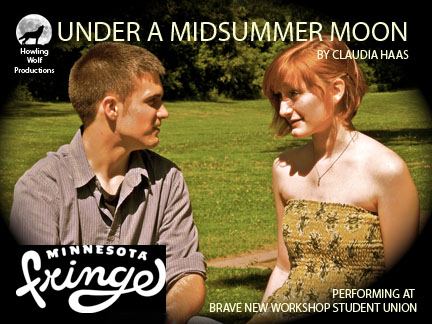 See you in September...

Email ThisBlogThis!Share to TwitterShare to FacebookShare to Pinterest
Labels: Under a Midsummer Moon

She never thought she was beautiful. 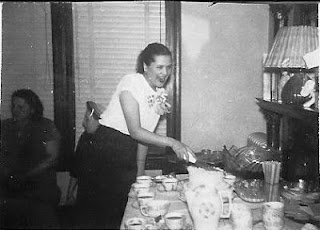 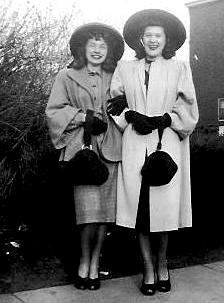 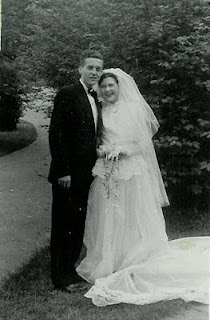 "The end of an era. My grandma joined my grandpa in heaven yesterday and in honor of her we all raised glasses before dinner. I am very lucky to have had her in my life for the last 23 years and proud to be the grandchild of such a classy lady." - Kirsten's Facebook post.
My mother was made up of pearls and sapphires and roses and daisies and pinks and reds. Laced with the crushed red pepper of Grandma's Basilicata. She was a true Italian Steel Magnolia. Delicate and fierce, lion and lamb, she showed uncommon strength during adversity. And a sweetness and gentleness of spirit during graceful times. Her middle name is Grace.

Opera sustained and comforted her. She got lost in the music and it brought her back to her youth - a time when her father listened to opera daily. She was initially named "Aida" but the hospital had a hard time understanding my Grandfather's pronunciation and somehow there was involvement with my Aunt Rose and suddenly Aida became Edythe.

Bones. They flavored the sauce ("they're the best part!"). And she gave me her bones. 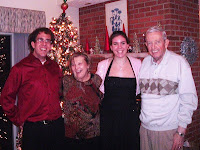 And laughter. And generosity of spirit. And of course love. 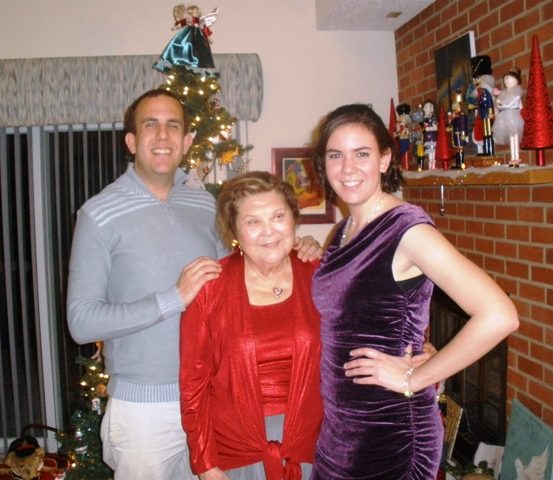 We were blindsided. Her sisters lived well into her 90's and we took it for granted that she would also. We had a ways to go.

"Is she going to be all right?" I asked my sister when I learned she was in the hospital.

Two days later a diagnosis and then the following week she was home with hospice.

The night she came home, the furry tornado that is Murray-Guido Shostakovich entered our lives. He likes to sit in sinks. My mother had talked of getting a cat for two years. It was the perfect time. A "rescue-kitten," he will have the most pampered life with my sister. She is a born care-giver who lovingly cared for my mother the last few years. 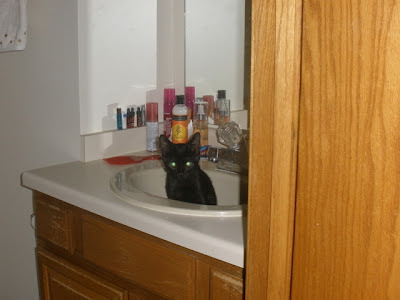 Murray is a cyclone. The day after my mother left us, Murray (aka "Murrala") decided he could fly and lept off the 2nd floor platform. He couldn't fly. My sister now has a vet. And Murray is fine. And we're affixing plexiglass  across the stair railings. 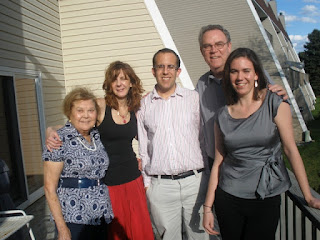 In the week she was home, I learned so much about her. About her spirit. Reflections, dreams, day dreams, early morning conversations with my sister centered around the journey of the spirit - her spirit and ours. As my mother slowly passed into another world, she was still teaching me. I learned so much that week. I just wish there was an easier way to learn.

On July 5th, the hospice nurse told us to be prepared for her leave-taking that weekend. My birthday was on the 12th. I understood if she couldn't stay. I told her so. On the 12th, I ran home for miscellaneous work with my Fringe production. 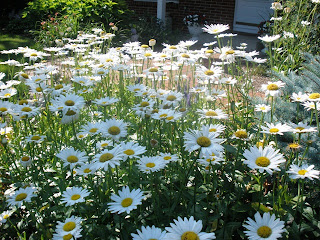 I had a purr with Pip. 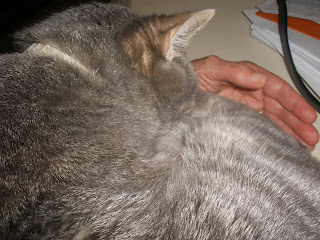 Marveled at the volunteer flowers on the patio. 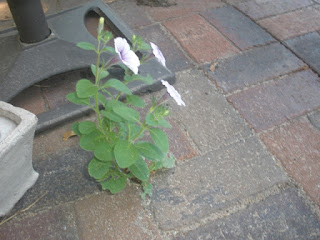 And returned to my mother. My sister was 100% certain I could do this because she wouldn't leave me on my birthday. Even though the nurses were stunned that she was holding on five days later. My sister was right. She didn't leave. 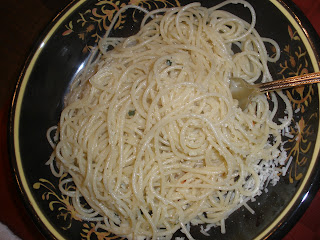 Paul, Matthew and Kirsten gathered at my mother's for my "old" birthday (it's a decade thing - even my mother told me to stop telling people my age because it was aging her!) It was a simple dinner:


The comfort food my of my childhood. I wanted the aromas to go to my mother.  There was laughter at the table. A lot of it. The hearing is the last sense to go. We gave my mother an earful! And she was at my birthday party. Her last parting gift to me.

On July 13th - on her mother's birthday - my mother left. Diane and I were on either side of her and wished her godspeed and told her how happy we were that she could be with my father and her original family. And of course, how much we loved her. 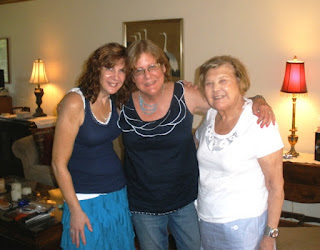 Cook up some pasta tonight. Blend some olive oil and butter. Add a touch of garlic and saute briefly. Throw your pasta into the garlicky oil. Sprinkle with Italian parsley and a heavy dose of some good Parmesan. I guarantee - instant comfort. Instant love. Each time a Gresio left me, I celebrated them with pasta and wine. It nourishes the spirit.

I learned a lot about the generosity of the spirit. The generosity of others. Courtesy of my mother's friends, Diane and I could host a dinner party for forty at any given time. The fridge was that packed. With sweetness.

Amazingly, this was not a week of weeping and wailing. There was a lot of laughter tinged with a touch of dark humor. A lot of ruminations on the sense of the spirit. And I have to tell you - two weeks ago I found out my mother's age. I never knew. And guess what? It's not on her obituary and I'm not telling you! She was ageless. 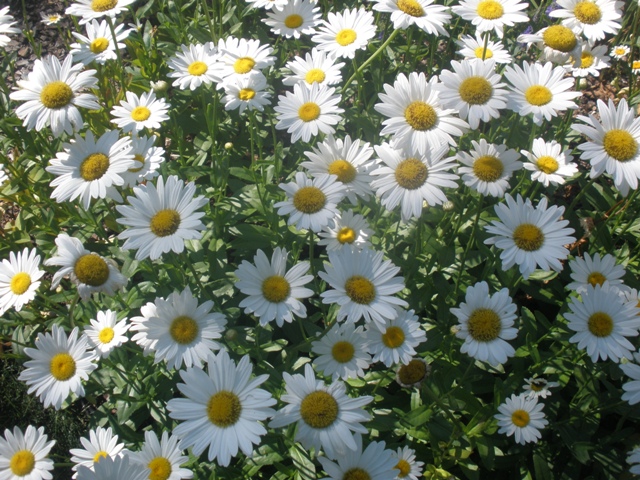