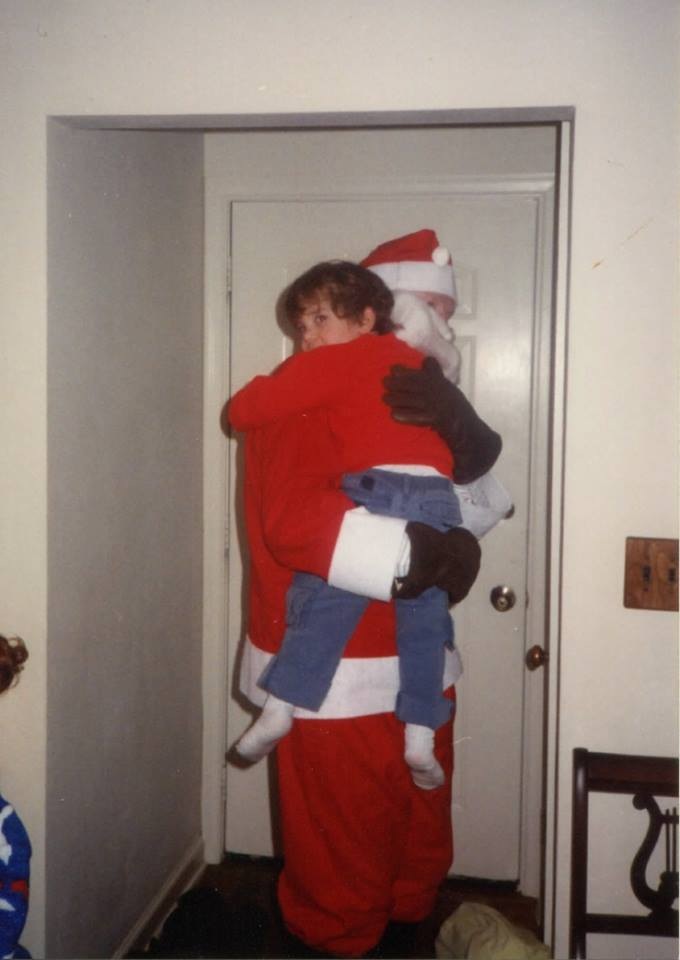 There are eighteen grandchildren with a memory of Santa coming by every Christmas Eve. 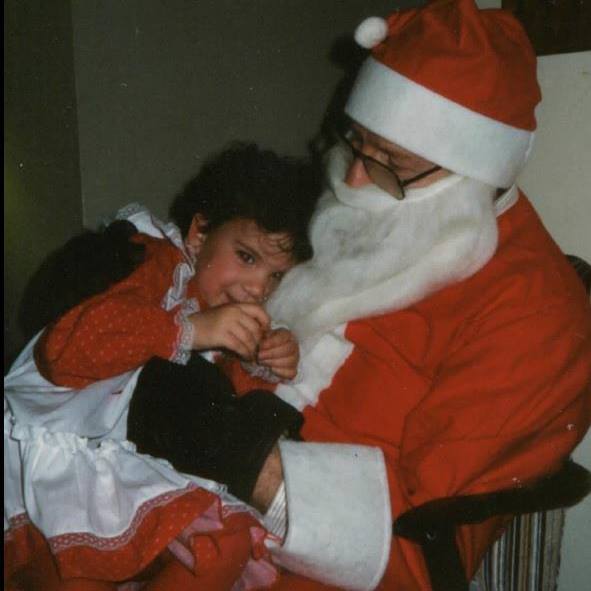 They would sit on his knee and and tell him what they wanted for Christmas and be rewarded with a bag containing an orange and a box of Cracker Jacks. Simple things. Building blocks of love. As the grandchildren grew older, they would learn which was Santa's bad knee and avoid it.

My father-in-law had some tough times.  He grew up in St. Paul during its infamous gangster era and had a vivid recollection of Van Meter - part of the "Second Dillinger Gang" being shot to death in his neighborhood. The press snapped photos of children looking down on the body until neighbors finally brought out blanket and covered the man.

At about age 10, work was scarce. He lost his father at a young age and his mother was scraping by. Word came to her that there was work to be had in St. Paul for one of the older children. So she told my father-in-law to hop a train (yes, hop a train - no ticket) and go to Bemidji (up north about five  hours) to bring home his brother who was working at a lumber camp. He did so.

With all of those tough times, he was an optimist. He worked two jobs, put dinner on the table for a family of 11 and never complained. If my husband would make a remark about a challenge in his job he would always reply, "Isn't it great? You're working!"

I am grateful that both my mother-in-law and father-in-law were such great storytellers. I have precious glimmers into the world they grew up in. He always called his children (and children-in-laws) on their birthdays and sang "Happy Birthday" to them. We have the recording on our answering machine from this past August. But the Santa legacy is one for the ages. And if Santa is your legacy, you carved out a beautiful life for yourself.

He called his wife "Duchess" and she called him "Alphonse." He promised her he would wait until after she passed and join her soon after. And he was as good as his word. Nine weeks after Duchess left us, Alphonse soon followed. It was one week before what would have been their 63rd wedding anniversary. I don't think he wanted to celebrate it without her. And the date of Alphonse's birthday? Christmas Eve of course.

"Alphonse" loved brats, bacon and beef. And he ate his fill well into his nineties. This one's for you, Alphonse!

Steak with Mustard Butter  (from David Lebovitz's My Paris Kitchen which I highly recommend you put on a "wish list.") 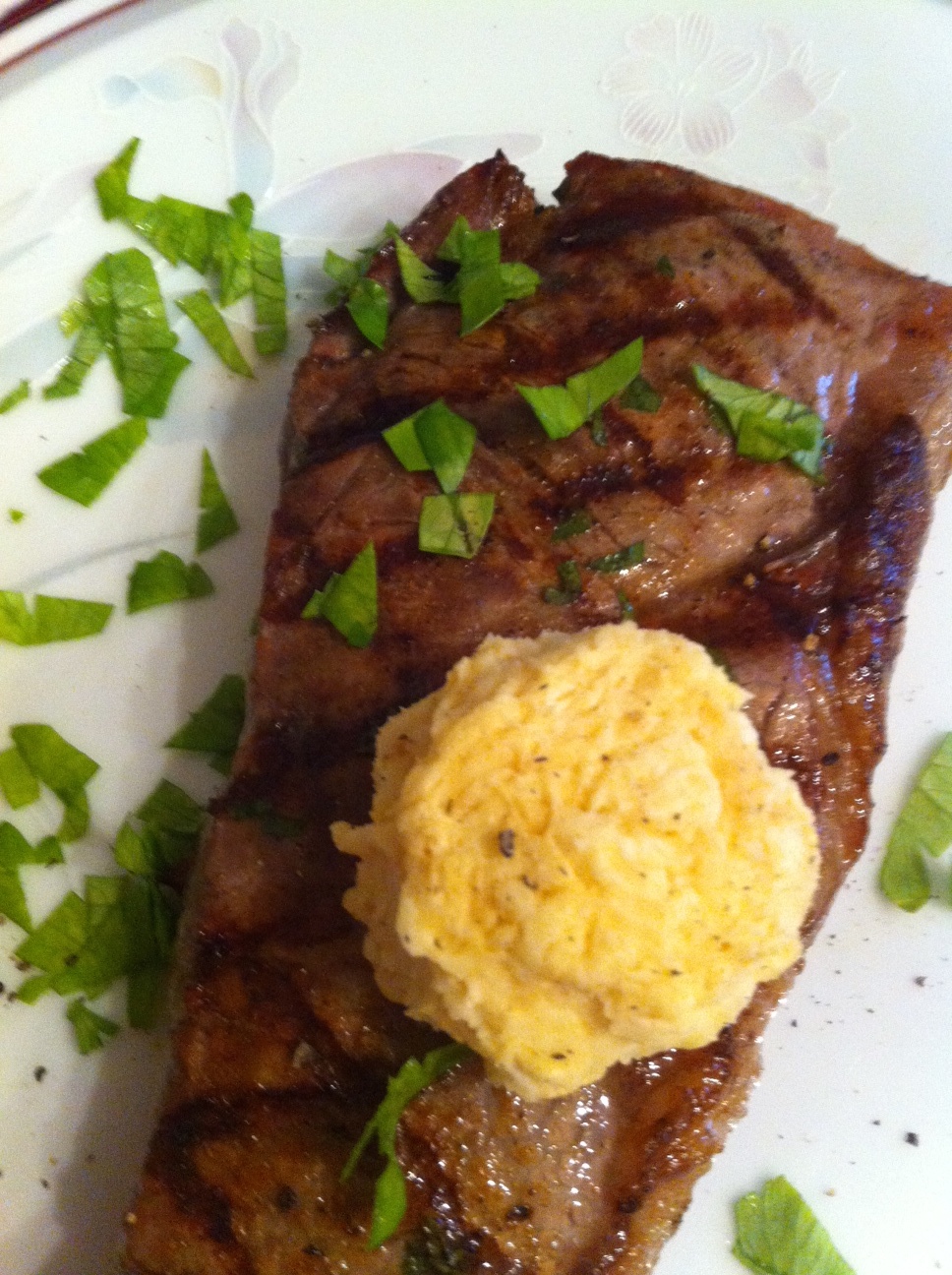 Prep
1. Pat the steaks dry and rub them with the salt, chipotle powder and cilantro. Refrigerate uncovered for 1-8 hours.

2. In a small bowl mash the butter with the dry butter and Dijon mustard. Shape into two small balls and chill on a plastic-lined plate.

3. Heat a little oil or clarified butter in a grill pan or cast-iron skillet and cook the steaks over high heat (searing on each side) until done to your liking. (Rare: 5-7 minutes each side for a guide.)

4. Put steaks on plates. Top with the knob of mustard-butter and freshly-ground peppers.

5. Watch the butter ooze into and around the steaks. 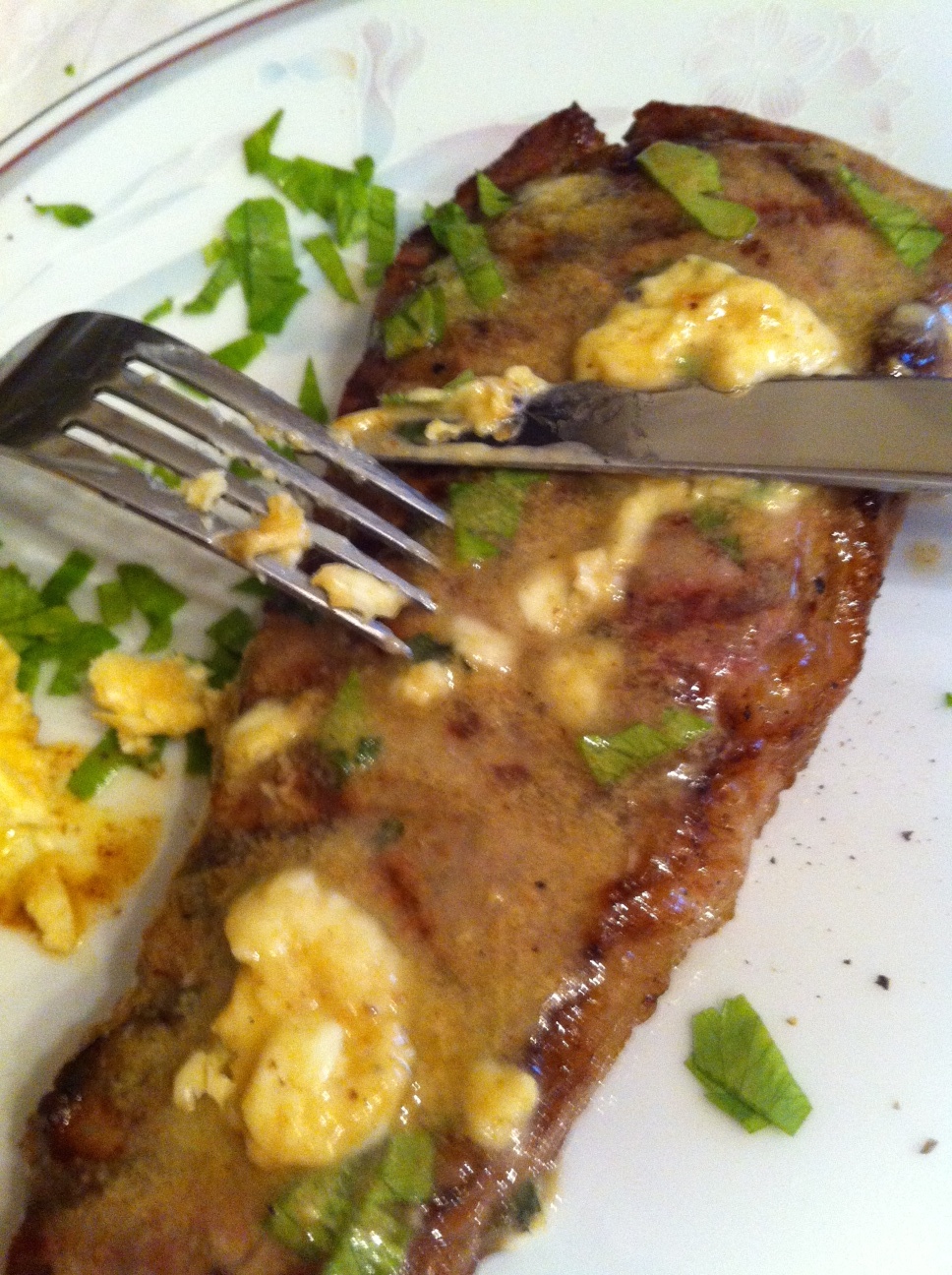 Missing both of them and thankful they have been a large part of my life. Very thankful. Happy Thanksgiving. 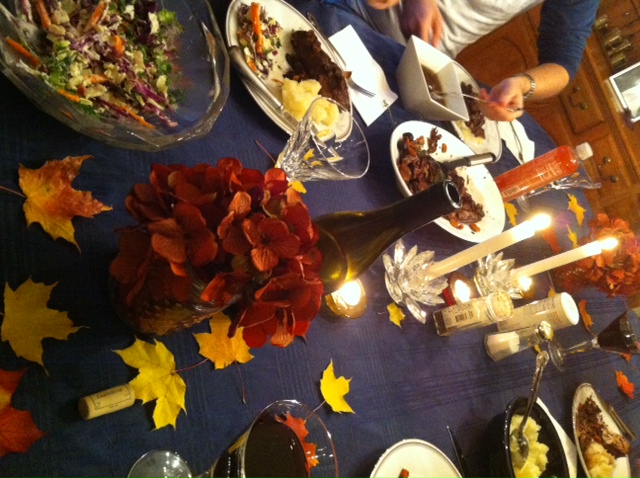 The snow came. And with it the cold. But before that happened, we had a glorious autumn and ate our fill (low-carb, etc.). Squash was everywhere. 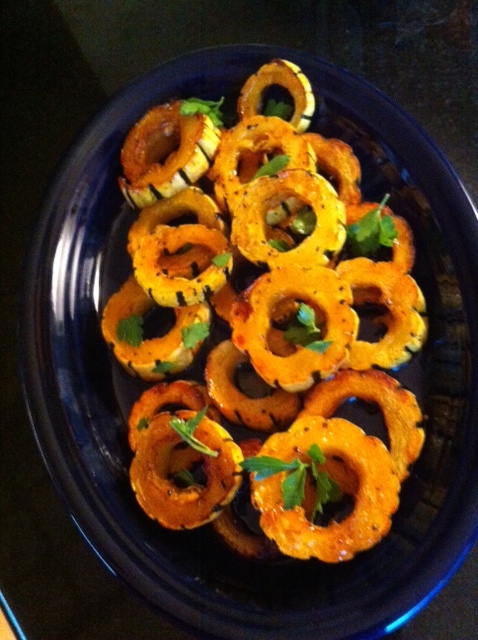 And I even made some. Once. Because: I don't like squash. There I said it.

But the family loves it so I look at new ways to cook it. This roasted delicate squash requires no peeling (happy rainbows appear) and is not too bad with the sweet and sour sauce composed of fresh lime juice, siracha and honey. (Recipe is below.) 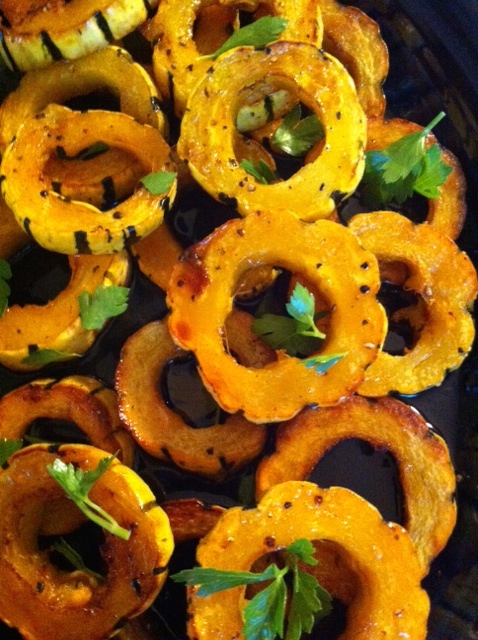 And it is autumn-pretty. I also intensely, overwhelmingly, emphatically dislike beets. (Paul does. Woe is Paul.) I think they're drop-dead gorgeous but pretty is as pretty does and I used to make them once a year to see if my taste buds changed. No. Don't look for beet recipes here.

Now if you combine squash - let's say pumpkin with sugar and cream cheese and then top them with creme fraiche and salted caramel sauce, you could make a case for squash.

So I did that - ignoring my low-carb diet. 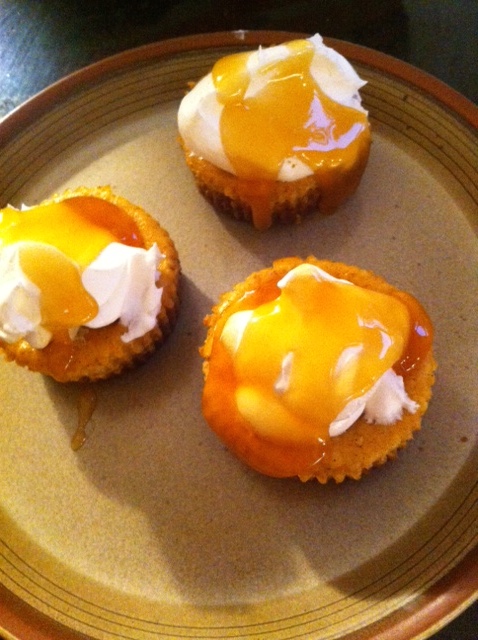 And bells rang in our little White Bear Lake kingdom. And all was well. These pumpkin cheesecakes have an easy gingersnap crust that adds some autumn spice. All is easy. All is perfect for Thanksgiving (they travel well). Top it with creme fraiche, whipped cream, Cool Whip for non dairy, or just the salted caramel sauce. Now that's the perfect way to get your intake of squash! 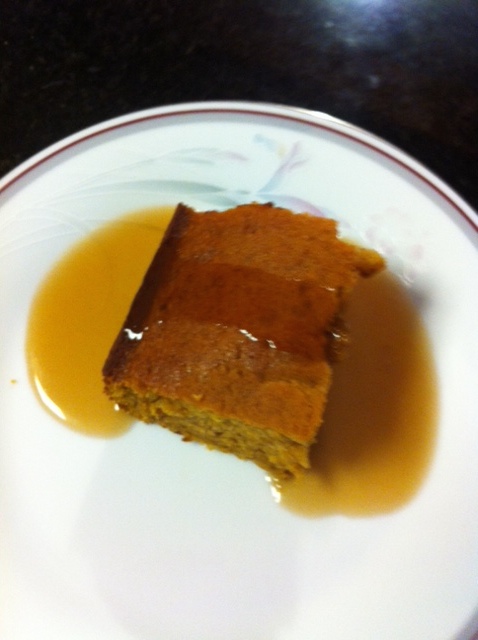 Then there's the pumpkin sheet cake. This is a pumpkin version of a spice cake and then topped with a thin, caramel icing. Again, easy, fulfills your vegetable requirement but with panache. This is from Mary of One Perfect Bite. It's a blog you should know and will like. A lot. Much more than I like squash and beets. (Come on, you must have popular "foodie" foods that don't work for you.)

Now for a "real squash" recipe.

Prep:
Preheat oven to 400 degrees F.
Generously oil 2 baking sheets
Toss squash slices in the oil on the baking sheets and season with salt and pepper
Roast them on one side for 20-25 minute - until lightly browned
Flip them and roast another 10-15 minutes until other side is lightly browned (mine didn't brown a lot)

While squash is roasting, make the Sweet and Sour Sauce by whisking the lime juice, Siracha and honey. When squash is done cooking, transfer squash slices to a plate. Drizzle the sweet and sour sauce over all. Garnish with Italian parsley - or cilantro.

There is a lovely step-by-step presentation of this recipe as well as tips on seeding the squash at Shutterbean found here: Delicata Squash with Sweet and Sour Sauce.

And finally, a week before the snow came - this happened. 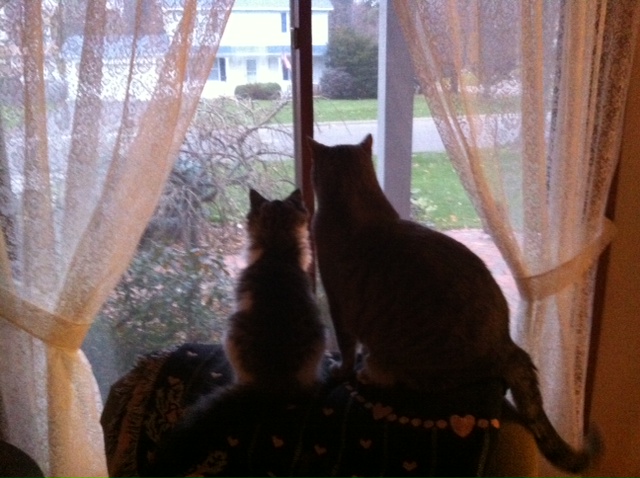 We took in a stray. Pippin is giving him pointers on watching Bird-TV.  Happy autumn, all!