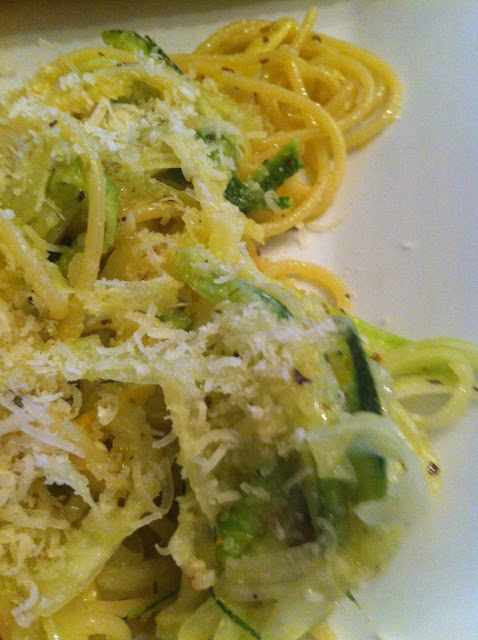 Zucchini chips, zucchini tian, zucchini fries, zucchini roll ups (with prosciutto and provolone - very nice). Zucchini sliced, shaved and spiraled. 20 cups of zucchini chopped up for breads and cakes - later. Much later. Maybe January. I beg my neighbors to take the zucchini, fill bags of zucchini for family members. And I may just wander to a nearby parking lot and put zucchini in the car of anyone with an open car window.

I like the stuff. But we are now empty nesters and 4 zucchini plants is a wee bit excessive these days. Maybe it's time to grow sunflowers....

But for now - I have zucchini. The above zucchini is pasta is really lovely (of course it is! It has carbs!) I spiraled a yellow squash and a large-but-not-club-like zucchini and mixed it with a little pasta. Dressed it with the quintessential olive oil, pepper and Parmesan and five people were very happy at dinner last night. It's an easy, meatless, summer-light meal. And it uses up one large zucchini!

And that's the recipe - all is done to taste. I've done it with pesto and tomato sauce - but those sauces were a wee bit heavy for the delicate squash. 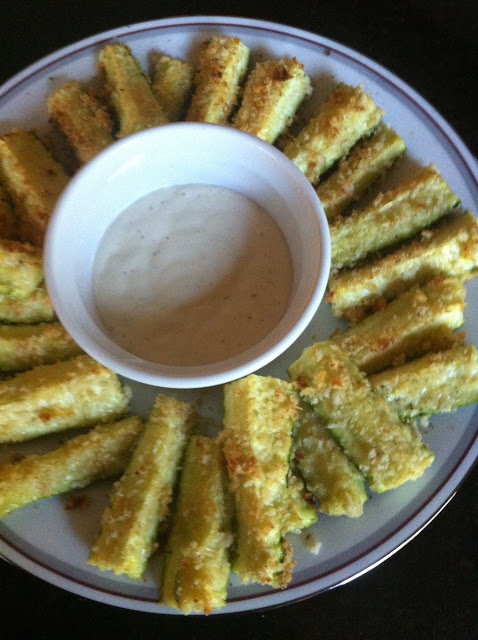 And these are good. You don't think you're having a potato - but you lap it up anyway. Cut a medium zucchini into 8 pieces. (Slice in half and quarter each half). Dip in an egg wash (1 egg with a little bit of water - beaten). And then roll in 1/2 cup Panko mixed with 1/2 cup of Parmesan. Bake at 425 F for 20 minutes. Serve with Ranch (husband favorite) or marinara sauce (wife favorite).

It's Midsummer.  And it will be Christmas any day now, right? So I am trying to embrace the heat. After being in Minnesota for .... well... that would be decades .... I am no longer wired for heat. When we hit 75 degrees, I think, "'I'm meting." Something tells me I couldn't retire not Florida...

All my recipes this week have been:
a. easy
b. light
c. easy
d. appropriate for "I'm melting weather."

And that would be this: Grilled Swordfish with Lemon Caper Sauce 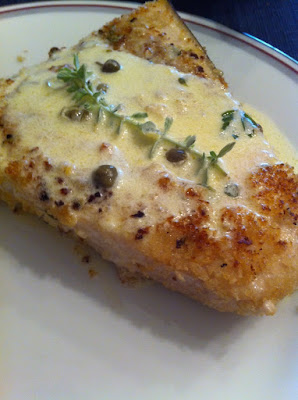 And because it is Midsummer, it's necessary to stay hydrated. I found this recipe for a Cosmopolitan on Kitchen Riff's blog. Don't let the pinky-frou-frou-Sex-and-the-City-association fool you. It's a serious drink. Citron vodka, Cointreau, fresh lime juice and a touch of the cranberry juice.

It was a happy patio last Friday night. Find the recipe here. 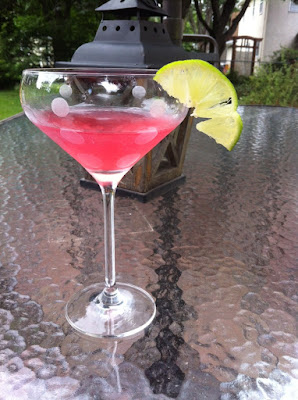 We live two blocks off the lake. We picnic on the lake. And inexplicably - we vacation on other lakes. 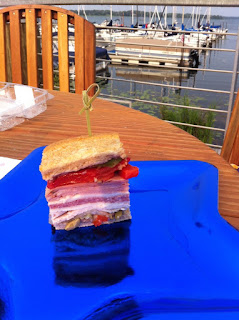 And when Renegade Theatre selected A Paper Forest as one of their plays for a new Play Reading Series, we used it as an excuse to spend some time at the "Big Lake" (aka Lake Superior). 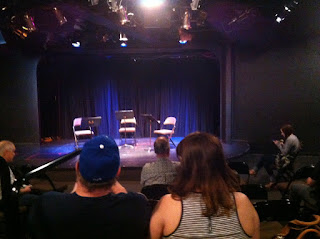 And while it was wonderful that both husband and son could join me for the reading, I think the highlight for them was the new craft beer Brewery located in Canal Park - right on the lake. 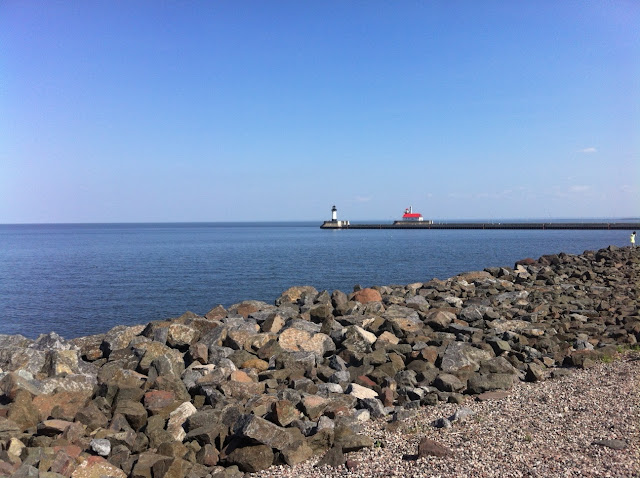 I will embrace the heat because this is Minnesota and by the end of August, our patio might need a little fire for warmth. Wishing you warmth and cool and zucchini and lakes. Happy Midsummer! 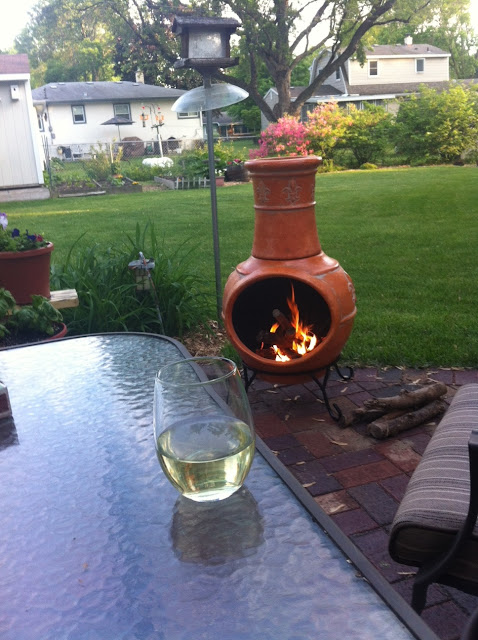 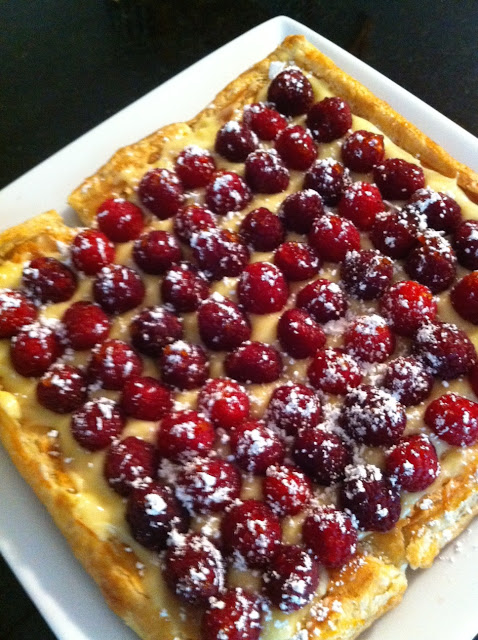 There was a birthday (and a raspberry lemon tart) - which merits a little discussion - because I don't know how to act my age. In fact - I am confounded by my age when I look in the mirror - wondering who this person - in her sixth decade - is? I was good with 40. Fifty was a breeze - although I colored my hair more often. But this sixty stuff - really has me evaluating. And it's not like I turned sixty yesterday. No - it happened a while ago. Of course - wasn't 1990 a while ago?

And rather than churn out another blog entry - I have thought for months where it is going. I've been very sporadic - because I want to veer in another direction (mostly Italian, simpler than ever - because at sixty there is a sense of mortality that didn't come with other decades).

And also sporadic because of this: 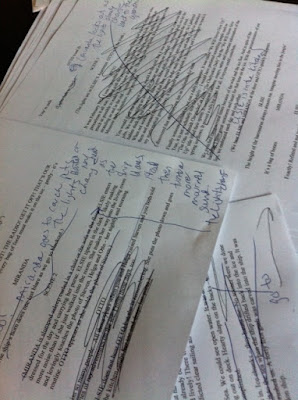 This is the tenth draft. In my heyday of posting a few times a week, I noticed that I wasn't writing plays. If you're a playwright - not writing plays is frowned up. June 30th I did finished my 10th draft of And the Universe Didn't Blink (now titled Bound by Stardust). It's been a bridesmaid in every contest it's been entered in - but never the bride and so I begin again. And if you know of a theatre that would like a peak at a play that contains physics, magical realism, the Russian explorer Otto Schmidt, grief and how to hang a mirror on a star to view the past - please send them my way.

But you're probably here for the tart. The easy raspberry-lemon tart - because if there's one thing I have succumbed to at age 60 - is ease. I will save the time-consuming, detailed stuff for the plays. I found it here. It really is summery-sweet: easy, light, easy, fruity, easy...

1 sheet puff pastry - thawed but still cold
1 egg for egg wash (and some flour for rolling)
4 ounces mascarpone cheese
1/3 cup sugar
2 tablespoons of cream (I used milk)
1/3 cup lemon curd (homemade or store bought)
1 pint raspberries (I used more because my backyard raspberries are on steroids)
1/4 cup raspberry jam, warmed (I omitted because I didn't have it)
powdered sugar 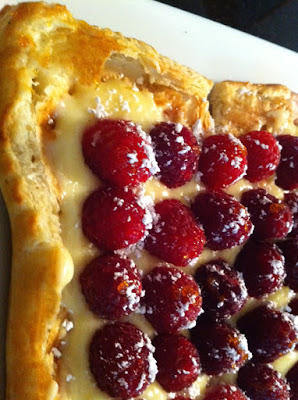 Tart
Preheat oven to 425 degrees f.
With a little flour dusting, roll into rectangle (they suggested a 10 x 11 rectangle - mine was taller and leaner - because I wish I was taller and leaner)
Transfer to baking sheet lined with parchment paper.
Brush the edges with a little water. Fold over each side to create a "lip" on all the edges. Pierce all over with a fork. Gently brush all with your egg wash (a beaten egg mixed with a tablespoon of water).
Bake for 15-20 minutes (mine was getting brown at 15 minutes).
With the back of a spoon, gently press down any bubbles in the middle that puffed. Cool on wire rack.

(Can be made ahead. When cool, wrap carefully in plastic and refrigerate.) 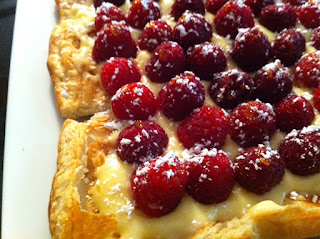 Filling
Take out a medium sized bowl. By hand or with electric beaters, beat cheese with sugar until sugar is incorporated. Beat in the milk or cream. Fold in the lemon curd.

(Can be made ahead. Wrap bowl in plastic and refrigerate.)

Assembly
Pour lemon curd mixture into the middle of prepared tart. Spread evenly to the edges. Place the berries on top. Brush with warmed jam. Sprinkle powdered sugar over all.

I assembled this one hour before serving. It is best not to assemble this too early. Swap out the raspberries for strawberries or blueberries. Use cream cheese instead of mascarpone. Try a raspberry curd instead of the lemon curd. This is a good recipe for playtime. 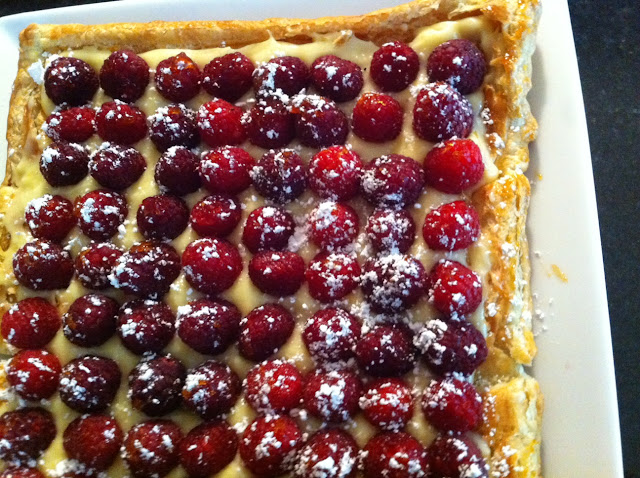 But this is a nifty, low-carb treat that I thought I'd share. 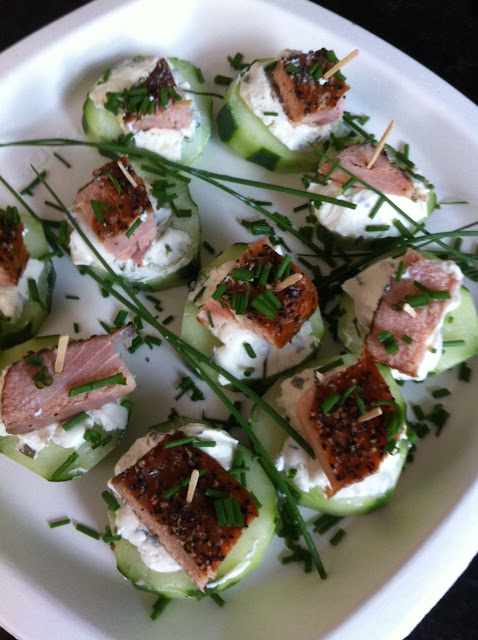 And apropos of absolutely nothing because I am not writing a play but having fun with blogging, below is a not-so-still-life of Pino and zucchini. The fur-feline loves zucchini! Who knew? 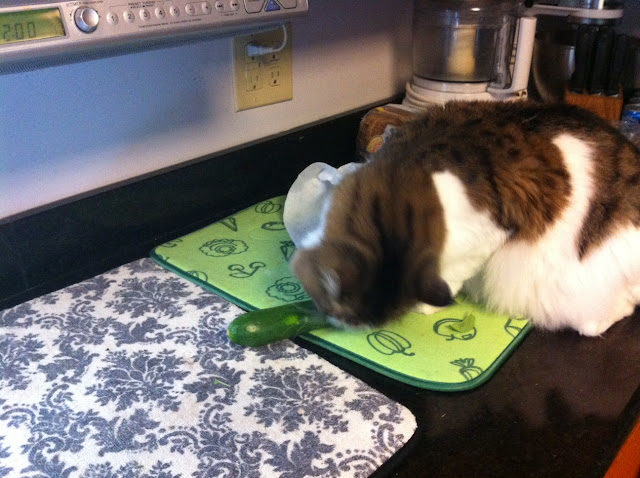 Have a great week, all!