We had our first Cover Girl Dinner Party. My sister and I made a resolution to cook every cover recipe from Bon Appetit in 2009. And it was a roaring good time of banter, rich food and some rock 'n roll. It was a sublime eve of: comforting, warm-the-heart and spirit food, sparkling water, wine, silly conversations, family and friend, new kitten (came into the home yesterday), really annoyed older cat and one confused dog ("Do I have to life with two cats?" she cried.)
` 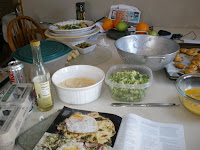 Fettucine Carbonara with Fried Eggs
(4 servings: I doubled this because I was serving seven. In truth this recipe serves at least 6!)
Preparation 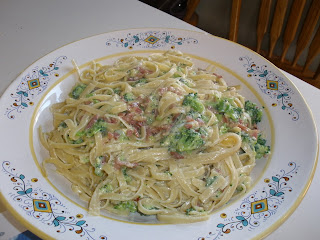 Bon Appetit suggests serving this with a fried egg on top of it. Some members of my family think fried eggs should be on top of every meal they eat - even apple pie. Other member won't go near an egg and their back squiggles when you mention eggs. (These same people have no qualms about a consuming a sauce consisting off eggs and cheese - interesting.)
So - we took orders for the fried eggs and only prepared as many as needed. I thought the pasta had enough eggs and was unsure about adding another egg to the meal. My husband and father (who have long appreciated the egg) thought it a match made in heaven and announced that fried eggs should always accompany carbonara and why has it taken so long for someone to figure it out? 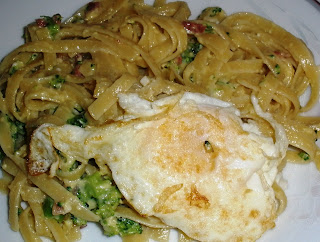 I brought out the salad after the meal (an Italian tradition). Mixed baby greens, blood oranges and scallions in a light white wine vinaigrette. Dessert was melon and berries. The meal was rich and warm - perfect for a Minnesota Sunday where the high was zero degrees. (Air temp - not wind chill; Minnesota is not for the feint of heart - but it does inspire cooking.)
Carbonara's origins are a bit murky. Because "carbonara" is derived from the Italian word for "charcoal," many theories abound. Some believe it started as a hearty meal for Italian charcoal workers. Others think it was originally cooked over charcoal. And yet another theory is that is the the specks of black pepper and pancetta in the light, creamy pasta looked like little charcoals on the dish. Whatever the origins, it is likely that the meal developed after WW II when eggs and pancetta and guanciale were widely available. There is no mention of the recipe in earlier Italian books.
I would love to be over-confident and state that if all the Cover Recipe Dinner Parties came off as carefree and delisicously as this one - I will have a grand year ahead. Of course, Diane and I have no idea what we'll be cooking over the course of the year. But February's cover recipe is a steak, red potatoes and string beans. Sounds straightforward. An all-American meal. We shall see. Next dinner party: February 21.