Maybe it's because I'm working on adapting an odd little story of Charles Dickens - The Magic Fishbone that I have Dickens on the brain. I could easily have called this post Oliver Twist or - after discovering there were no mini-muffin pans to be had and the lemon glaze had to be thrown out - Bleak House.
`
Yesterday was our April Cover Girl Dinner. My sister and I get together once a month to cook the Cover Recipe from Bon Appetit and other assorted goodies from the same magazine. Every other month we also do Tastes of Italia. The evening has become popular in our family. I even have my daughter's boyfriend asking us what the upcoming menu is. So you see - there are expectations involved. As it involves dinner - these expectations are great. 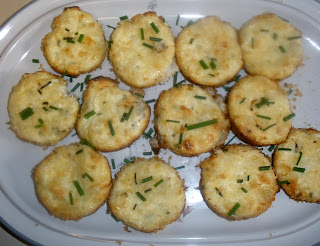 It was:
Crab Cakes
Grilled Chicken Salad with Tarragon Pesto
Lemon Cornmeal Cake with lemon glaze and blueberry sauce
I thanked heaven for the blueberry sauce because the lemon glaze became sour-sugary-little balls that refused to become a paste. Maybe I should have spiked it with rum and served them plain hoping the alcohol would dull all wonderment as to what they actually were. As it was, the "glaze" ("Ha!" she said) went into the garbage.
The crab cakes were to be baked in a mini-muffin pan. Without going into reasons why the mini-muffin pan did not happen (this is called avoiding a family "war"), out came my huge-honking muffin pas and the recipe dwarfed into the little muffin holes. Never mind. It's better than the filling winding up in the same place as the lemon glaze. 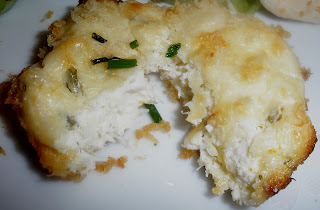 A tad skinnier than they might have been, they were scrumptious. A savory blend of tart sweetness that to speak the truth - was really a crab dip masquerading as a "cake."
Add a bit of wine and all kitchen splatter-disasters melted. All was eaten and eaten well.
Ingredients
8 oz cream cheese, room temperature
3/4 cup finely grated Parmesan cheese, divided
1 large egg
1/4 cup sour cream
1 teaspoon finely grated orange peel
1/2 teaspoon finely grated lemon peel
4 teaspoons plus 2 tablespoons chopped fresh chives, divided
1/4 teaspoon coarse kosher salt
Large pinch of cayenne pepper
6 oz fresh lump crabmeat, picked over, patted dry, coarsely shredded
1 cup panko (Japanese breadcrumbs)
1/4 cup (1/2 stick) unsalted butter, melted, plus more for pans
Fresh chives, cut into pieces
special equipment:
2 mini muffin pans (I highly recommend that!)
Preparation
Using electric mixer, beat cream cheese in medium bowl until smooth. Add 1/4 cup Parmesan and egg; beat to blend. Beat in sour cream, citrus peels, 4 teaspoons chopped chives, coarse salt, and cayenne pepper. Fold in crabmeat.
DO AHEAD Can be made 1 day ahead. Cover and chill.
Preheat oven to 350°F. Generously butter 2 mini muffin pans. Toss panko, 1/2 cup Parmesan, and 2 tablespoons chopped chives in small bowl. Drizzle 1/4 cup melted butter over, tossing with fork until evenly moistened. Press 1 rounded tablespoon panko mixture into bottom of each muffin cup, forming crust. Spoon 1 generous tablespoon crab mixture into each cup. Sprinkle rounded teaspoon of panko mixture over each (some may be left over).
Bake crab cakes until golden on top and set, about 30 minutes. Cool in pans 5 minutes. Run knife around each cake and gently lift out of pan.
DO AHEAD Can be made 2 hours ahead. Arrange on baking sheet; let stand at room temperature. Rewarm in 350°F oven 6 to 8 minutes.
Arrange crab cakes on serving platter; sprinkle with chives.
Bite sized or mammoth, skinny or fat - the recipe it worked. I do so love forgiving recipes. I am not sure at this point what Dickens would say. I am quite sure Shakespeare might chime in with "All's Well that Ends well."

Funny how a little wine can make things better...I think everything sounds delicious...rum-soaked, is that what you said!?

The crabcakes sound delicious to me. I haven't made a perfect crabcake yet. The first time, they felt apart (it was years ago) and the second time, they would have been fine other than the fact that there were a few tiny shells. Haven't tried since but I really need to.

I love the Cover Girl dinner!!! Do you always do Bon Appetit, or do you switch from one foodie magazine to another? What fun! Everything sounds delicious on this menu! Do you invite friends, too?

That's very ambitious cooking Claudia...the monthly cover of Bon Appetit...sounds like a fun thing to do with your sister though...I will be trying many of the recipes in your archives...Thank you for visiting Claudia!

What great fun to cook/bake with family, I am drooling over those crab cakes and grilled chicken is always a hit here.

Unconfidential cook: We do Bon Appetit every month ande Tastes of Italia (bi-monthly). Maybe in 2010 we'll do a different magazine.

That's why I dirink wine when I cook - lol. This sounds like a great family traidition. How wonderful to have a sister and one that shares your passion for cooking.

Love crabcakes... never made them. Time to try!

I love the idea of your "Cover Girl" dinner. The crab cakes look delicious. :)

this all sounds so good :)

don't you love dickens? he always makes me smile. which is odd, knowing dickens. but nonetheless, i do adore him.

wouldn't you have loved to read his stories in their original weekly article format? oh, the suspense!!

Those crabcakes sound delicious! I noticed they use cream cheese, that's very unique - I bet it adds a lot of rich flavor.

What a terrific idea to cook what's on the cover of the magazine!! A good excuse to get togther and cook. The crabcakes look wonderful!

What delicious looking crabcakes! A pity crab meat is so expensive here...

The idea for your Covergirl dinner is inspired! I'm stealing it at once. The crab cakes look so tasty and I'm glad I'm not the only one who has kitchen-splatter disasters which are ameliorated with wine...

i thank heaven for blueberry sauce in general, regardless of your lemon glaze debacle--it's good stuff! great feast, claudia!

Thanks for the sweet comments the other day :-) Those crab cakes look amazing!