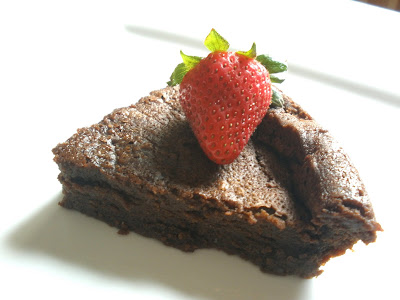 Fairy tales need a magical occurrence. More and more, I wonder why these occurrences are not related to food. Last night, I had 5 friends over dinner. A few directors, designers, and other assorted theatricals. We spoke of casting Lakeshore Players Ten-Minute Play Festival, a set design for Pinocchio, the continuing snow, visiting opossums and whatever clicked into our brains. And so the conversation remained - electric currents that buzzed about the arts, the news, science and the weather. The baked brie smothered in porcinis and shiitakes that spent the day swimming in wine helped keep conversation flowing. The fresh baby lettuce was consumed and our brains stayed on track. Even though the ravioli called for way too much burnt butter and pignoli nuts (note to self: alter recipe), we touched on owning cats, raising children, cycling, playwrighting and expectations in life. Even the Pinot Grigio, Newcastle Ale and Pellegrino had no influence on the ebb and flow of conversation.
`
And then I brought out Molly Winzeberg's "Winning Hearts and Mind" chocolate cake. She knows from where she speaks. Part torte, part fudge, part brownie and part magic, conversation ceased. One hearty soul had a second piece. Dollops of cream made it's way around the table. Thicker than a mousse, lighter than a cake, more soul-satisfying than a piece of artisan chocolate, hearts and mind were won. And the conversation took an interesting turn. After consuming the cake, we discussed Facebook. Seven people over the age of forty (who are all "member friends") conversing about the innuendo involved if you send someone "a poke." One slice of a chocolate-cloud of a pie and our brains switched from somewhat intelligent to the inane.
`
For the finale, all gathered around the stairs to watch "Pippin the Kitten" fly through railings playing with a stuffed mouse. For twenty minutes. The chocolate cake had worked its magic and reduced seven adults to an an altered state of complete silliness. The cake couldn't be easier. It's foolproof. And ending a dinner party in the silly-zone is like taking a mini-vacation from everyday life.
`

Molly's recipe is here. Take the journey. It's worth the calories.

Wow, this entire dinner sounds magical...especially that cake! It's amazing how food makes people lively, comfortable, and talkative! Such a great common denominator!

Wow does this look good! I find that I can never have enough chocolate cake recipes, one for each type of occasion.

The cake is like the perfect little black dress every woman wants in her closet. Maybe the best feel-good things you can have in life is a black dres that makes you feel swell and a chocolate cake recipe seemingly devised in the heavens.

Oh my chocolate loving husband would really enjoy this cake.

Looks delicious! I will bookmark that recipe so that I don't forget to give it a try.

I'm putting this recipe in the chocolate pile! I love your description of the dinner and especially of the cake!!
Nancy

This looks totally decadent-and something I bet I will love!

Thanks for stopping by. I have an aunt that lives out by you-she lives on Bald Eagle. Yes, I do believe that St. Paul would be small compared to NYC, but the town I live in now is so small we don't have a population sign-and most of them are all related to one another :)

I want to make this too...I read the recipe in Molly's book and now that I've seen a picture here I think I have to make this.

that cake would still be worth it if it was double the calories! it looks amazing :) glad you had a great night with friends!

All of the food sounds amazing!! The magical cake looks dense and rich and scrumptious!

You don't have to convince me that this cake is worth the calories. It looks fantastic! Can't wait to try it...

It looks fantastic and very tempting! I can't resist such a treat!

this looks amazing. the combination with Orangette is amazing thanks.
im drooling...

Time to make another one - for Easter.

Now..What did you actually discuss about Facebook, because I just don't get it! haha. Am I the only one? :)

you've converted me. time to put on my oven mitts and hell to the calories!

a yummy cake that comes together easily (and disappears just as quickly!) -- sounds like my kind of dessert :).

Oh MAryann! When I read it last night, I thought the reference was a bit obtuse. So I amended.

Wishing you all this chocolate cake in your future.

That cake looks magical to me!