April is the Cruelest Month

No, I am afraid this is the view White Bear Lake woke up to this morning. It would be pretty - if it was the Winter Holiday Season. But there are no carols dreaming of a White Easter. I decided the snowy-sleety-in-your-face-white-stuff was not conducive to planting (how bright I am) but as an enforced indoor day, I should be able to get a lot of writing and cooking done. 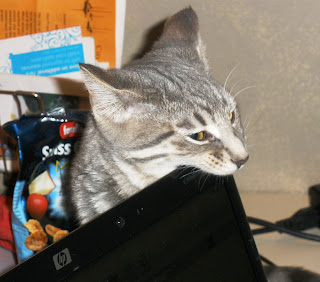 The writing came in fits and starts. Pippin is still teething. But I did manage a credible version of The Bread, the Necklace and the Dove. Mary Ann Esposito has a lovely story of why Dove Bread is made every Easter in Italy. It is in her Ciao Italia cookbook - a cookbook I have mauled with use. I took some of that story and combined it with Lynne Rossetto Kasper's story of the fury that ensued when the Academy of Italian Cooking in Bologna announced an "official" Ragu recipe that did not include nutmeg! Newspaper editorials carried denouncements and all over Bologna, people sat in piazzas, cafes and probably bars - hotly debating the "official" recipe. She talks about it in The Splendid Table and I quickly tuned into the passion about food. In the USA, it is genuinely thought that one must avoid talk about religion and politics if you want gentle diner conversation. (We ignore those rules.) But it seems in Italy, one must be careful about talking of food! But how can you not speak of food at the dinner table?
I am now finding inspiration for my plays from cookbooks! I wonder if that means I can deduct their purchase from my taxes? So, yesterday was spent removing Pippin's teeth from my computer, sighing at the snow, cooking "sausage braised in wine with penne" and finishing The Bread, the Bracelet and the Dove. The play is geared to middle-school performers. It was once part of Ciao Cinderella ( re-telling of the Italian Cinderella -La Cenerentola - based on Rossini's opera.) As I changed, added, adapted, deleted, I had a zippingly-sweet memory of the eleven-
year old actor who played the emotional baker - Dario. He nailed it. Perfectly.
"(TANEO moves to the BAKER. SIGNOR DARIO meets him part way and is literally weeping over the bread.)

TANEO
Why, Signor Dario! Why do you weep? Did something happen to the bread?

TANEO
Did it fall down?

DARIO
It rose! And it rose again! It was as high as the two towers of Bologna! Never has a bread risen to such greatness in my oven! It is a work of art! Behold!

(DARIO uncovers the bread. It is indeed “magnifico!”)

DARIO (cont’d)
It should be painted gold and put in a Museum for all to see. Such bread!

DARIO
Take it to the Academy of Cooking! All of Bologna should know of such bread!

TANEO
It will be on Signora Gisella’s table tonight. There will be nothing left but crumbs.

TANEO
My Mistress will pay you on Monday.

DARIO
No! No payment! It was an honor to bake this bread. It is my present to her.

DARIO
Now. I must prepare for the “other one.” For Serafina and her lopsided creations. It is not a pretty sight. Her bread – is not good enough for the pigeons. Scusi."
Happily, in-between writing and saving the computer from sharp-kitten-teeth, I was also able to cook at the same time. The recipe is from Lynne Rossetto Kasper's The Splendid Table. See? I also cook from my cookbooks. 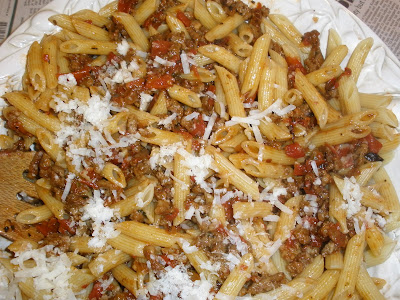 WINE BRAISED SAUSAGE WITH PENNE (Ms. Rossetto-Kasper used homemade Gramigna)
1 to 1-1/2 lbs mild Italian sausage (preferably without fennel) sliced into 1/2 inch rounds (here we go: I used bulk sausage so it was crumbled)
2 T extra-virgin olive oil
1 medium onion, minced
6 T Italian parsley, minced
3T minced carrot (I used more)
1 large garlic clove, minced (I used 3)
3 large sage leaves (I used 6)
Generous pinch ground cloves
1 T imported Italian tomato paste (I used 2 and it was not imported - I don't think!)
1 cup dry white wine (sounds right!)
1 pound vine-ripened tomatoes peeled and chopped or 14-16 oz can of tomatoes with their juices (You see the photo above. There are no vine-ripened tomatoes - I used canned)
16 oz Pasta - any tubular would do.
1 to 1-1/2 cups freshly grated Parmiggiano-Reggiano cheese
For the pasta - you know the drill. Cook according to package instructions or what you will.
SAUCE
In a large, heavy skillet slowly saute the sausage over medium-medium low heat for about 15 minutes. (Until the fat is released and the pieces are browned.) Turn the pieces often. When browned, remove sausage to another plate. Pour out all but 1 T of the drippings. Add the olive oil to the skillet over medium heat. Stir in the onion, parsley and carrot. Cook ten minutes (till golden) - taking care not to burn crusty brown bits at bottom of pot - you want them in your sauce.
Return the sausage and add the garlic and sage and cook about 2 minutes. Add the cloves, tomato paste and half the wine. Bring to a gentle bubble, scraping up the brown bits you didn't burn from the bottom of the pan. Cook about 8 minutes - until all the wine is evaporated. Add the remaining wine and simmer very, very gently until the sauce has a rich, deep aroma - about ten minutes.
The sauce can keep for awhile. When you are ready to serve the pasta, bring the sauce back to a gentle simmer and stir in the tomatoes. Let it bubble about five minutes - until thickened. Toss the sauce with the pasta and about 1/3 of the cheese. Serve.
I did not add the cheese - I always let each individual do their own. But I had plenty on hand and it was served hot so everyone's desired amount of cheese melted blissfully into the pasta. Just the way I wish the snow would melt happily into the ground. Serves 6-8 as a main course. (6 in my home.) Chin-chin.

This pasta looks excellent. If I can substitute a chicken sausage this will be a perfect dinner for us tonight!

I almost always use turkey sausage - prefer it. But it's been hard to find. I think chicken sausage - si!

I have to say - I don't envy your snow, but I do envy that great looking pasta!

Sara: I am envying all your spring greens. And practicing patience.

That is a lot of snow! Here's to getting lots of writing and cooking done. This penne dish looks fantastic. I'd love to have a bowl right now. What comfort food!

We had leftovers. It works as long as it remains snowy. I am starting to long for the grill though ...

This pasta looks delicious--I make something similar all the time, but have never added the wine, which is a terrific idea. Thanks--and I love that you used regular Italian sausage (I'd probably use hot).

I would love to use hot - but my midwestern family says "no." And while I was pleased with really fresh pork sausage -I do confess a love for turkey sause.

The snow is beautiful but I am ready for spring. The pasta looks TASTY!

I love snow! What a great view! Your kitty is sooo cute...

The pasta looks great. I am not a fan of snow...I'm ready for warm weather, that's for sure!

Mmm, pasta with sausage braised in wine.. I'll have an extra big bowl, with vino please!
We don't have snow at the moment, but it could happen - our safe planting date in Southern Ontario is May 24th.

This looks like the most perfect dinner!! It has everything in one dish, add bread, salad, done. LOVE it, Claudia, sounds fantastic!!

the addition of the cloves my make for a striking taste. The sauage and the sage and the flavors in the the gravy...wow you have all kinds of tastes hitting every part of your mouth. This is amazing!

Definitely write off your cookbooks! :-) And, very cute cat btw.

All the tastes melded so nicely together. I wasn't sure. Cloves and sage?

Thaks for your lovely comments on my cake Claudia...Pasta looks perfect...Nowadays i am trying to learn some pasta dishes...

The pasta looks wonderful!
I don't envy your snow though.
Thanks for visiting my blog!

Throughly enjoyed this blog and shall return back again for more. I went gaga over the first picture and naturally the rest that followed were very nice but not like the first shot.

The recipe was wonderful and I have saved it for next weeks yumyum menu. Thank you for sharing.
Cheers, PT

Wow that looks cold burr, I really loathe cold thats why I left N.Y. but it looks pretty. A pretty picture and gorgeous back yard. the penne looks terrific

scrumptious penne dish, always room for sausage and a lovely past too....

Wow, burr cold- Nice to be able to keep warm with a bowl of pasta, looks great!!