We are all waiting. For the Red River to crest. First it was supposed to happen Friday night. Now, it's Saturday afternoon. The Red River Valley flooded in 1997. Coming from NYC, I had never seen anything like that. Of course, I was also new to the ways of tornadoes and what "wind chill" really means. I paid no attention to weather in New York City. Sure, there were days I should have worn gloves, but in general, I never felt as if my life was in danger from weather. It's different in Minnesota and these days - it's different in North Dakota.

My son went to Fargo on Tuesday to help sandbag. (You know - it's amazingly low-tech and it works.) They were figuring on the river cresting at 41 feet. Then the blizzard came. And now it may crest at 43 feet.

Having just survived my son's road trip (and mishaps) roundtrip from central Minnesota to San Diego, I was not prepared for another day of worry. But that blasted blizzard blew into the Dakotas. And my son was in the middle of it.

So, I went back to baking. It was Tuesday and I had decided to follow Tuesdays with Dorie and made her Blueberry Crumb Cake. Not hard and it took my mind off of things. 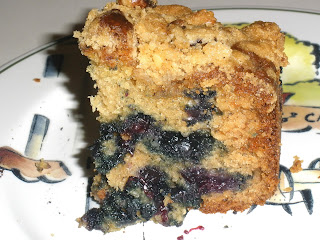 I awaited news on Facebook. Yes. That's how parents get a lot of their kid's news these days. Luckily, my son is "my friend!"

Nothing. I knew he was busy and without any horrid phone calls, I knew he was safe. I had used all this lemon zest for the crumb cake and now had a lemon begging to be an ingredient. So, I fashioned my mother's chicken piccata after this necessity. It may not be a traditional piccata but it is beloved in this house. It's one of those recipes - where all is done to taste. Sorry - no real amounts. (Although I like it lemony - even with floods and blizzards and a return to winter - I hold on to thoughts of spring and lemons enhance that.)

Heat butter and oil in a large skillet. Dredge chicken breasts in flour. When oil and butter are merged and beautifully hot, drop the chicken in the skillet and let it brown. Turn over when browned nicely. Remove chicken briefly and dot that tenting stuff. Deglaze with chicken broth and/or wine or a little of both. Sprinkle lemon juice into the mixture. Return chicken to pot. Cover and simmer till chicken is done and all the flavors meld. (About fifteen minutes). I am a convert to brown rice but I really prefer white rice with this one. And as suggested by UnconfidentialCook, I roasted some oil-brushed broccoli in a 400 degree oven till just cooked and served it all. 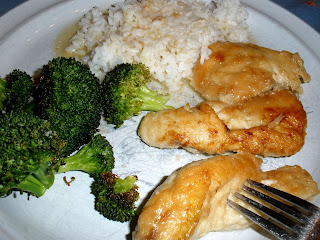 On Wednesday, my son's Facebook status announced "home." Today, I received this:
"Well the situation got a lot worse since we got back. The river is supposed to crest at 43 feet now, and not 41 feet like the dikes were built for. We helped build a dike in Moorhead first (at one of our classmate's house) and the dike is 8 feet tall there. We spent almost 3 hours Wednesday morning (1:30am-4am) in the Fargodome making sandbags, and then Wednesday afternoon was the coldest...We were in a Fargo neighborhood that day. The cold wasn't too bad overall, because we were moving so much.The house we stayed at is really in danger of being flooded...It's in the Rose Creek neighborhood and the dike is only a few blocks from their house. My friend Laura, who drove us there and is from Fargo, said some of her friends have already lost their houses and her grandmother had to be evacuated from her nursing home."
It's real, surreal, not real. So, I continue to wait. Warm my home with cooking. Grateful for my kitchen.

i hope everyone you know remains ok. you're in my thoughts. and that crumb cake sounds delicious :)

Thanks, Heather. I think the Red River Valley will take all the good thought that come their way. And the Blueberry Crumb Bake is incredible. I may never buy another coffee cake again.

The blueberry cake sounds awesome! I hope your son will be ok.

Its good you kept busy wating for word from you son, great looking cake too! My heart goes out to all those people!

Luckily, my son is "my friend!"

Wow, I can't believe this weather. Here's hoping everyone says safe and dry. Keep baking--it's a great comfort. Your blueberry crumb and chicken piccata certainly look like they could ward off some bad feelings. They look delicious!

My heart gos out to all the people facing flooding. I hope that the worst is past.

Your blueberry cake sounds so good and so does the chicken piccata recipe.

Kudos to your son for lending a hand, mom did a good job instilling that sense of responsibility I am sure :)

It looks like the crest happened yesterday and the dikes held. The problem with the cold is it slows down the river (which is good) but also means more crests can come as the weather warms. There are no casualties and reports have families manically feeding their neighbors and volunteers. Another instance of food bringing people together in a positive way.