I have the worry gene - definitely from the Italian side of the family. So, when my son told me way back in September 2008 that he and his buddies were planning to drive to San Diego from central Minnesota during Spring break - I instantly started to worry. Spring break is - now. Early March. One of the snowiest months of the year. And if I didn't have snow to worry about, there's always ice. And the fact that the Crown Vic does not do well on icy roads. And then there's the Rockies. Don't get me started on the Rockies! And the fact that four twenty-one year college seniors planned on travelling the three thousand miles in one fell swoop - through the night.

No matter that they left Minnesota after their last final at 4 p.m. during a snowstorm. Not a lot of sleeping went on in this house that night. But they made it to San Diego and they only had one slight altercation with an Oklahoma toll booth (the "boys" did not bring enough quarters, were followed by a trooper, all is happily resolved).

They started home yesterday morning. We received text messages on our cell phones each time they passed into a new state. We were keeping an eye on the weather as were they. So, Paul and I spent the day with our taxes. I write plays. I teach and direct theatre. I average about 10 1099's. Enough said.

And then of course, this is the weekend we lose an hour's sleep. I could be practical and say, if I was going to lose sleep over my son's road trip anyway - it might as well coincide with "the weekend of lost sleep."

They were driving about 20 mph through dense fog (see, I was so fixated on the snow, ice, Rockies, lack of sleep, I completely forgot to worry about the fog!). They hit a patch of ice and went into a guard rail. All were fine. One head light out. And they would remain on the side of the road in Nebraska for four hours. The state troopers had a busy night.

There was no going back to sleep. And my mind was racing. He was still in Nebraska with a ways to go before arriving safely back in Collegeville. I needed to occupy myself. I thought about bread - because you could bang it around a lot and get out pent-up nervous energy. But then, you need to let it rest and I was in no mood for anything to rest.

I thought about homemade pasta -but with the busy kitten, all I could see was "Pasta-with-fur-about" and it didn't sound appetizing. I wanted something mindless, easy, comforting and fast. And then I saw the banana-chocolate cake on the Orangette blog. 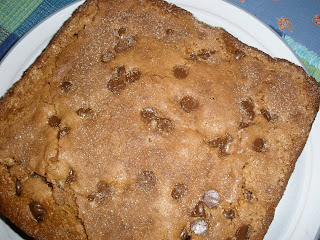 1:30 p.m.
I would get to mash the bananas (oh! did I ever mash those bananas!), eat chocolate, smell the cinnamon as it baked and eat it right out of the oven. And that's what I did. By the time the "bread" (getting real here: it's a cake) came out of the oven, Matthew and Company were in Omaha. About seven hours left to fret. Oh. And in addition to a head light out, turns out the dashboard lights also weren't working.
This is March comfort at its best. With no oil or butter, but plenty of chocolate and a sugary-cinnamon topping, it's a well-worn soft throw that wraps itself around you and your home as it bakes. The recipe was forgiving of mistakes. The heart stopped pattering. I was grateful the boys were so far safe. I was wishing they were here so I could offer them a slice right out of the oven. The chocolate was oozing. Chocolate can soothe a lot of ills. 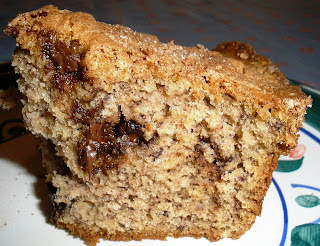 This took ten minutes to throw together (I spent about eight of those minutes loudly mashing!). 35 minutes in the oven and ready to serve.

Preheat the oven to 375 degrees F. Spray an 8-inch square pan. In a medium mixing bowl, mash the bananas well with a potato masher. Add the eggs, and stir well to combine. Add the flour, sugar, baking soda, cinnamon, and vanilla, and stir to mix.

Pour the batter into the prepared pan. In a small bowl, stir together the topping ingredients. Sprinkle the mixture evenly over the batter and top with the remaining ¼ cup chocolate chips.

Bake for 35-40 minutes, or until a toothpick inserted into the center comes out clean. Let cool in the pan on a wire rack for at least 15 minutes before serving.

4:30 p.m.
From the last phone call (five minutes ago), I learned that the boys are in Minnesota. Another three-four hours and they should be "home." I shall make granola until then. And wait for the last phone call saying they are back at school. Oh! And in addition to a front headlight being broken and no dash lights, it was mentioned in passing that a rear brake light was also out.

7:10 p.m.
All four are safe at school. And it's not dark yet (whew). And there's no snow, no ice and no fog. What there is: 12 cups of homemade granola and chocolate banana-bread-cake that served its purpose and will soon be doled out to Kirsten as she goes back to her college tomorrow.

Comfort food at it's comofrting best! I love the smells wafting thorugh our home as I bake. Your post brings everything to life! Have a good day!! Ciao Deeba

I'm so glad that your son and his friends made it back safely, even if they caused you some worry. This cake looks marvellous - and I know that I have at least 2 overripe bananas living in my freezer ...

Just to let you know, we never stop worrying about our babies, even when they are grown and have babies of their own :)

Adding you to my blogroll ..

This cake looks awesome. I bet its so delicious. I am so glad he arrived safely. Great storytelling, I was in suspense the whole time:)

And I was in terror! I suppose it goes with the mom-territory. But my banic baking yieled lovely results.

I knew the worry-gene was an Italian thing!!!

Yes and I have elevated worrying to a science ...or an art.

MMMMMM....I love every crumb of it! I made this today & it was wonderfully yummie!!
So, thanks!