Stepping Out in Shoes

I wore shoes yesterday. Outside. It may not seem like a big deal to some of you, but I haven't worn shoes outside since early December. Just before the snows came. And the boots came out. Oh sure, on days that the streets were semi-clear, I would be out in my trusty, huge clogs - they can go through ice, snowbanks and slush and keep my feet dry. But shoes? They've been sitting in my closet itching for a walk.

And then there was the robin. Sitting atop my crab apple tree - a true harbinger of spring. The rule of thumb in Minnesota is:
a. the robins return
b. we have 2-3 more snowfalls after their return
c. spring comes - in the way of actual crocuses - doomed to be eaten by bunnies before I head out the door in the early a.m.

And then - there was the asparagus. Bargain-priced, skinny with purple tops - gently ringing out the news that spring is - somewhere. Farewell turnips! Arrivederci celery root! Au revoir parsnip and cabbage! The asparagus is nudging in on your territory.

And in my trusty shoes with a robin singing, I brought home the asparagus and remembered a simple recipe from Tastes of Italia that I wanted to try. They have you boil the asparagus and I know better - but did it anyway. My preferred method is to brush it with olive oil, throw a little sea salt on it and roast it for 20-30 minutes at 350-400 degrees F. I can then eat it like candy. But I dutifully started to follow the recipe and came to my next hurdle. Mix 4 chopped hard-boiled eggs with 1 cup olive oil. Hmmm. That's a lot of olive oil.

I mixed the 4 hard-boiled eggs with about 1/8 of a cup. Salted it and peppered it. Added a touch of Dijon mustard and called it a day. Not fancy. Simple. Like a robin singing. Or wearing shoes. 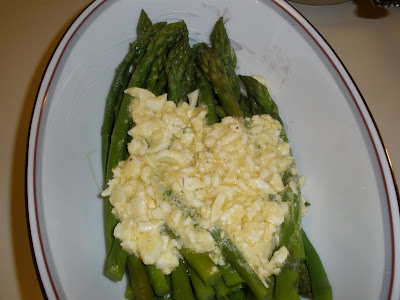 Coincidentally, over at Sara's Kitchen, she was featuring a similar recipe (her March 4, 2009 blog). She has a few more added spring-like ingredients and her garnishes are lovely and I have a feeling her recipe will be at my dinner table next week. But I first did want to share with you - that even in Minnesota there's been a sneak-peak at spring. Shoes and robins and asparagus. Can thunderstorms and tornado warnings be far behind?

Your asparagus looks delicious! I think asparagus and egg are a great combo.

This dish looks wonderful. I love the combination you chose, Claudia:)

Thank God spring is on it's way! Thanks so much for visiting my blog Claudia!

I can't wait for Spring! Asparagus...yum.

Oh yeah asparagus is plentiful right now, and I love it!

Great blog ... I will be back to check out your goodies :)

Thanks for visiting. Asparagus is appearing but it's not local! It's awfully good though!

Since you visited my blog, I've been exploring yours. I like it. I like it a lot. A whole lot.

What struck me here, quite apart from the recipe, was: "Simple. Like a robin singing". Thanks for that. You brightened my day.