Grandma's room on 166th Street in Jamaica, Queens was a wonderful mystery to me. Her dresser was a never-ending source of playthings. It was scattered with small statues of the Virgin Mary, pictures of saints as well as photos of her family that she had outlived. With my early actressy-aspirations, I would set all the statues and photos on the floor and set up scenes and move the saints around in my fantastical world. I would assign them characters and create dialogue in a multitude of voices as I went along. I am not sure Grandma would approve of me assigning the role of Dorothy from The Wizard of Oz to the Virgin Mary. I was Catholic enough to know I should never assign the Blessed Mother the role of the Wicked Witch. But Grandma never complained that her statues and photos seemed to be rearranged after I visited. And I continued to imagine away my time in her home.

I remember early mentions of St. Joseph's Day - from my Catechism class and through Grandma, but it wasn't something we ever celebrated. I have grown more Italian with age. I realize that my specific childhood as an Italian-American in Queens, NYC is becoming extinct. My reaching out to my heritage is a way of laying groundwork for my children. I want them to know that America wasn't always chain stores and strip malls. I want them to be able to create a meal that was eaten generations ago and thus become acquainted with their past.

And so, I went to the grocer today knowing there would be pasta. And Aunt Fay's stuffed mushrooms. I pondered the fritters but didn't want to deep fry anything, so went with the St. Joseph Day zeppoles that are baked. I had a recipe that didn't always state amounts and ended with: "put dollops of the batter on a greased baking sheet and bake." Hmmm....is a dollop a heaping spoonful? 1/4 of a cup? More? I reached back remembering the zeppoles I had at the old St. Gennaro Festivals in Little Italy and decided to go with about 1/3 of a cup. My remembrances of the St. Gennaro Festival is truly from the olden days - they didn't hawk socks and purses then - you had zeppoles and sausage and peppers, there was a parade, Italian was spoken on the street... I always had a zeppole - a huge deep fried mass of flour that was put on a napkin that did not soak up the grease and covered with powdered sugar. By the time I went to the sausage and pepper stand I was a spotted spaniel with sugar firmly sprinkled in my hair and clothes. After eating the sausage and peppers, the grease from the sauages combined nicely with the sugar. I was a walking tasty treat.

As it turns out - these baked zeppoles are more like gougeres. (I have never found out how to use accents on the blog, so I apologize to my French word which sits as naked as the English ones.) 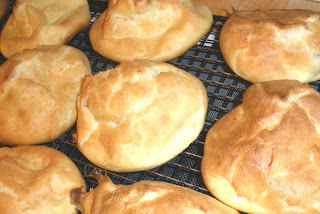 Also - they were huge.

But they were easy, are very tasty and you can fill them with cream, sweet cheese filling (such as for cannolis) or pudding.


ST. JOSEPH DAY ZEPPOLES: Preheat oven to 450 degrees F
1 cup water
1/2 cup butter
1 T sugar
1 t salt
Boil the above ingredients tell all is melted and dissolved. Remove from heat. Add:
1 cup flour - stir till well mixed, Add
4 eggs - incorporate and then add
1 t orange peel
1 t lemon peel
Drop by dollops onto greased baking sheet. Bake for twenty minutes - or till golden brown. Next time... my dollops will be a heaping tablespoon because when you fill it with cream ... 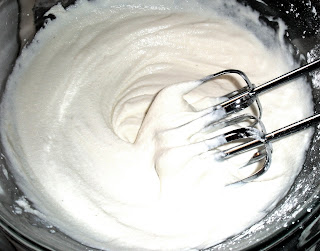 (cannoli cream in my case) it can be very, very filling. Using a pastry bag, you can fill the zeppoles. Or you can be a lazy bum as I was and simply cut them in half and put a "dollop" of cream in the middle, cover the zeppole and be done. 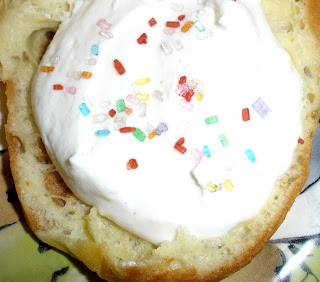 Grandma may not have loved me directing the Virgin Mary in various plays but she would have approved of the zeppoles and my bringing St. Joseph's Day to my home in Minnesota.

Reach out into cyberspace. There are eight more!

Wow, I would love one right now also! These look so delicious with the cannoli cream!

Mmm, these zeppoles look fabulous. I love the idea of putting a nice cream in them--maybe a clotted cream! Mmm, I could eat these at any meal really. They look so good!

Good for you making these today! Loved your writing in this post :)

OOOHHH!! Zeppoles are my favorite. I get them every year at the San Genarro festival in NYC!! I have yet to try them at home, I think I shall now. They Look FANTASTIC!

Oh - they are a wee bit different than the Feast! But good in their own right.

Memories and food seem to seep into everyone of us ... recreating a special treat or meal that we enjoyed with those who came before us.

I wish I had planned ahead to make zeppoles. My dad would have loved these. His parents named him after St. Joseph. :) Your zeppoles look lovely Claudia!

Thanks Laurie and Ohio Mom.My husband is Paul Joseph and that is close enough to celebrate. I love that it is a sort of Father's Day in Italy.

These sure look good, and I bet they'd be good smothered in some kind of fruit or chocolate sauce.

Ohh these look so tempting! It would be difficult to stop with one...

What a tasty treat, and I like the story too. I would like to do the same thing with my own children; it's so easy to forget where we came from/our culture. Connecting with food is a great way to remember, though.

Im a fan of zeppole, always wantyed to try an authentic zeppole someday.
Thanks for stopping by and your comments :)

I've never actually eaten a zeppole. Can you describe the texture? Is it basically a cream puff? Is it dense?

Please let me know, I love your blog! I'll be following it from now on.

Katherine: These are fairly light.It was the cannoli cream that made it heavy! The zeppoles puff up while baking. Traditionally, zeppoles are deep fried and dusted with powdered sugar - they are a mainstay at Italian street festivals. Thank you for your kind comments about my blog. Much appreciated.