No-cook appetizers for my spring of amazements 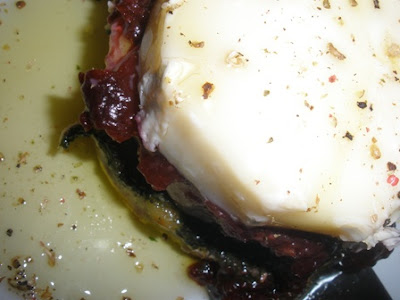 This was an amazing cheese torte. Minty, herby, sweetly-fruity, creamy, pillowy and tangy. I shouldn't be surprised. It's been a spring of amazements. 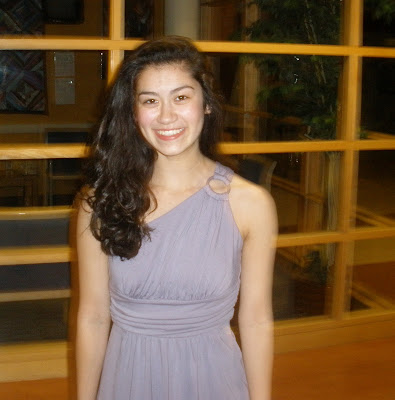 Years ago, a young child walked into my theatre program. She worked on a play of mine Cast Away in Time. The play actually won some lovely awards, was rewritten continuously (plays are not written but rewritten) and the play turned into Cast Away in Shakespeare's Garden. This child remains - one of the great kids of all times. Months ago I received a call from her. "I would like to direct the first play I was ever in for my Baccalaureate. I have no budget - just a dream. Would you give me the rights" In a nano-second. And that's how she came to direct my Cast Away in Shakespeare's Garden. Her story is on my youth theatre blog.
`
I went to her opening - it was the night before my father's Memorial Service. Worlds were colliding. It was a reminder of the sweet amazements in this life. It had been her first play at age 9 - she was so very young when I immersed her into Shakespeare's world. Opening night was Shakespeare's birthday. How fitting. Opening night was also her 16th birthday. How perfect. I sat in the audience filled. Not with the longing emotion that I held for the past month - but the emotion that accompanies growth and fruition. 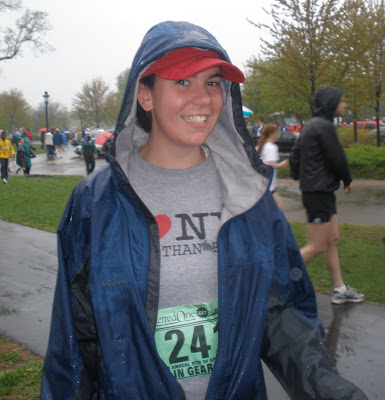 Hours before the Memorial Service, my daughter ran the 10K "Get in Gear" in Minneapolis. Grandpa was an athlete. He would have approved. It rained - but my daughter didn't care - she trained for months and was going to finish strong - and did.
`
After my amazements in L.A. courtesy of Bertolli Foods, I set my sights on creating my own amazements. Shake off the fog. Rejoice in the spring. And held a spring soiree. 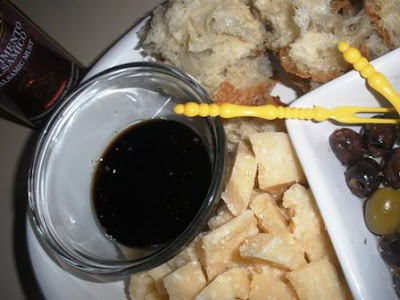 The requisite Parmesan, olives, crusty bread and some mighty fine balsamic for dipping. Just assemble - no cooking required.
`
Melty-creamy Brie with rosewater-raspberry preserves and a touch of chives. It was a warm weekend - no need to fire up the stove. 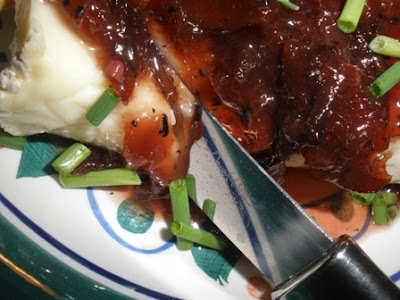 The down-to-earth ricotta salata with some might fine, piquant castelvetrano olives. 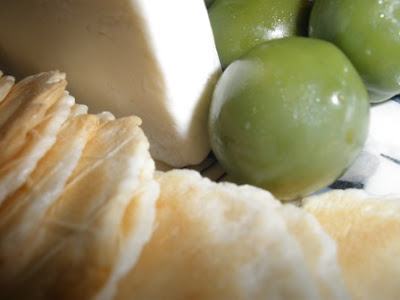 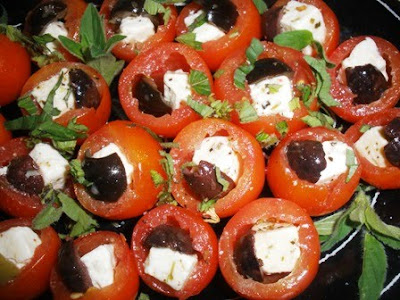 And some mashed avocado drizzled with lemon, covered with fromage blanc and topped with smoked salmon. 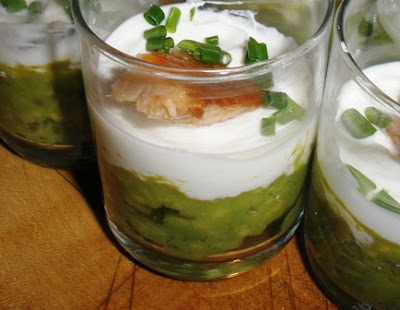 Served in votive candle holders. (All right, I could try to be classy? pretentious? and call them "verrines.") My husband said we would never eat all those appetizers (the "Spring Soiree" was for 7). 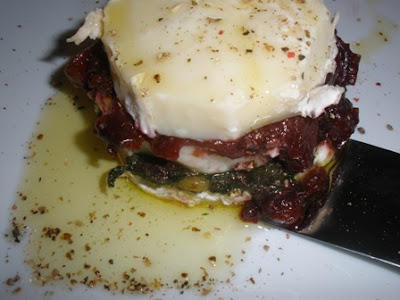 But we did - including the most amazing goat cheese torte (recipe coming). And then we had dinner.
`
And then came an offer of publication for Cast Away in Shakespeare's Garden. (I finally marketed it.) And smiled in amazement.

Life is full of amazement, isn't it!? Thanks goodness = ) YUM!

Wow! That sounds like one amazing day. Those appetizers look yummy.

I call them "candle holders" too. :-))
The feta and olive filled cherry tomatoes look fantastic. Thank you for sharing your life amazements with us. :-))

Life is wonderful and your appetizers are perfection!

Life is good...thank you for these appetizer ideas. I'm hosting a shower at the end of June, and I am going to have to find some easy appetizers to serve...I've got some great ideas now!

your the best Claudia love this post, hope you get to go back to Cambridge as a great playright and relax on a punt much love Rebecca

The wonders life brings... So happy for the offer on your play!

I love that you put those in votive holders, very creative, great presentation and just the right size:)

Claudia, what a feast. The "no cook" appetizers caught my eye right away. Lovely presentation.

I'm amazed that it was her 16th birthday on opening night. How exciting for her.

Congratulations to your daughter on her run in the rain and your offer for publication of Cast Away. Lots of good things happening. I know your father would be pleased.
Sam

What a lovely story, though I'm so sorry to hear about your father.

There are several appetizers in here that I'm putting on my list to try.

I told you he is looking down on you....wonderful post, lovely appetizers....

Aside from your father's death, which is very very sad, there is some really good karma going on for you. Maybe your father has something to do with it, from wherever he is. Congratulations on all your good news - and the dinner munchies looked terrific.

Amazing how you put together your food so effortlessly. Congrats on all the good things happening in your life:D

These are terrific appetizers! They look easy to put together and super delicious!

You have come back from your trip with a passion. There is much going on in your life right now. You write beautifully about it. Life is at times hard to balance and you do it with grace. I hope the service brings you peace. Blessings...Mary

Everything looks and sounds wonderful but i'm interested in your rose raspberry preserves. That sonds really yummy!

Megan: It's a condiment from the grocery store. Raspberries in rosewater. A little pricey but grand for special occasions. I can look up the vendor is you wish.

Definitely an amazing day and love all those fabulous appetizers. They are so scrumptious looking I'll have to try them this spring/summer.

Thank you so much for sharing these recipes.

Thanks for the reminder of how amazing life is! Beautiful post!

I love your appetizers! I will definitely be trying out your ideas.

Good for your daughter for running a 10K - rain who cares, this is the spirit of sports, more in spring there. I run races in rainy days too!

I’d like to taste this cheese torte, must be fascinating :)

Claudia you did not sue any of the artisan salt you bought in LA in your appetizers? :-) Every one of them look delicious!

Congratulations to your student for directing her first play, and to your daughter for running the 10 K! Both are such lovely ladies!

Congrats on getting another play published! So well deserved!

I am having fun with my grandson this week ..he is beginning to talk and I'm sure he's picked up a little of my accent..lol!

I have to get up this very minute and get some cheese, olives, sundried tomatoes, and crusty brad ...for a snack! You made me so very hungry with this post, Claudia.

You must feel so pleased to have influenced such a lovely young girls...both the young girl and your daughter!

All those dishes look scrumptious!

I'm so happy for you! Scratch that. I'm thrilled for you! That is the best news. Congratulations! Your delicious eats have my mouth watering, as always.

Claudia, Congrats to you on your play! Everything seems to be going your way! You know the saying, "what goes around comes around". So happy for you!

Hi Claudia - YAY for your play, and the lives it touches.

Those are some mighty looking tasty appetizers. Ha! I just posted a verrine! I really like the sound of the avocado/fromage blanc votives!!

My gracious, all this food is making me super hungry=)

Congratulations, Claudia! Aside from your father's departure, your life is like a banquet — full and festive.
And all those goodies you served; I would be satisfied with antipasti for dinner!

What an amazing journey of events. This is what I love about your blog most...The journey. Love it.

Life is full of wonderful gifts. Even in times of extreme grief God knows how to fill our cup with happiness. I am happy for you Claudia!Congrats!
Those awesome dishes are good relief in summer. Creative presentation!
Love it!
God Bless.

Life is up and down and full of both the sad and the happy. Happy are we that can revel in the good things and use them to sweetly remember the sad.

And your appetizers are fabulous! I want some of each!

Wow, what great stuff, the play - talk about a gift that kept on giving. Think of all the people you've touched, I'm blown away, to your daughter running the race in honor of her grandfather to your delicious meal. What a grand post, and now I eagerly await the recipe you teased us with.