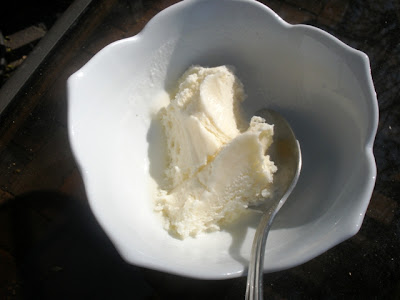 The Chelyuskin is sinking in the Arctic icy waters. Horns are blaring. The ship is being evacuated onto the ice. The "Soviet Titanic" has less than two hours afloat. Will 110 people make it safely on to the ice in time? And once there - how they will survive the frigid air temperatures of -43 degrees C? And even if a rescue can happen - no ship can get through the ice floes in the water and there is no landing strip on the ice.

It's boring. How can I take a remarkable tale of survival on the ice - a tale that includes women and children and two babies and make it so boring? Eight months into the play and I am in danger of giving a major sleeping pill to future audiences. (Or having no future audiences because nobody will produce it... because it's - dull and tedious. And did I mention - boring?)

Dinner seems to be my only "real" moment of the day. But the "cold from hell" hangs on. Yesterday, I gave careful consideration to placing a gallon of ice cream in the middle of the dining room table and telling all to "dig in. That's your dinner."

Uh oh. The boyfriend will be here. Maybe ice cream for dinner isn't a good idea. I relented. I caved in to society's expectation of "the good mother" and put a proper dinner on the table. This chicken-chickpea stew fulfilled my requirements - it's all about ease - I inadvertently picked a healthy dish and it satisfied all. Nary a drop left. And there was still room for ice cream. 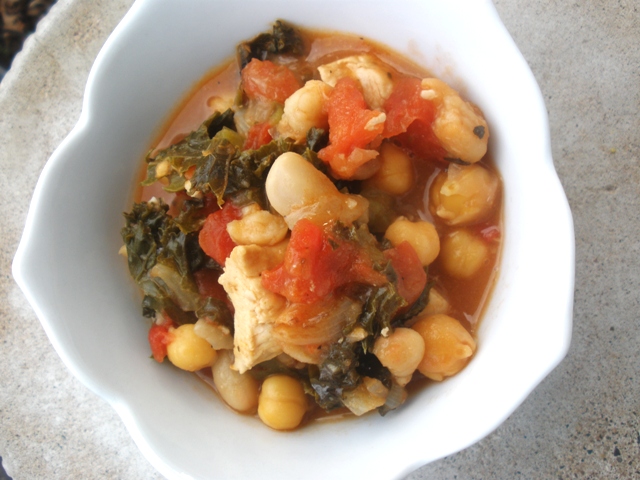 It's a one-dish meal from Tuscany. I found it in Joe Famularo's wonderful A Cooks Tour of Italy. I have been using Famularo's recipes for years. His stories surrounding his food finds make everything personable and accessible. I've done a lot of armchair traveling with him. Sometimes I open up one of his books when I get itchy feet and want a quick vacation in Italy.

My version is just a wee bit easier that Mr. Famularo's - because I'm sick and really just want ice cream! Instead of 1/2 tsp cumin, dried oregano, dried thyme and crushed red pepper - I added some Italian seasoning and called it a day. I also left out the 2 tablespoons of tomato paste and 1/2 teaspoon of sugar because I didn't see it on the ingredient list. Ever miss an ingredient?

Feel free to add these ingredients in when you combine all - or just use my simplified version. Either way - it's a winner. Especially if you start thinking vanilla ice cream with salty dark chocolate topping is a good idea for dinner.

In a heavy sauce pan, heat the olive oil and saute onion and pepper until softened (about 8 minutes). Add garlic, saute briefly.

Leave out the chicken, use vegetable broth and make it a vegetarian - even vegan meal. Don't be fooled by the down-home, "hot dish" nature of this meal. The colors and varying textures really do this dish proud. Want a touch of elegance? Think of it as a bruschetta topping and spoon it over some crostini with melted cheese. 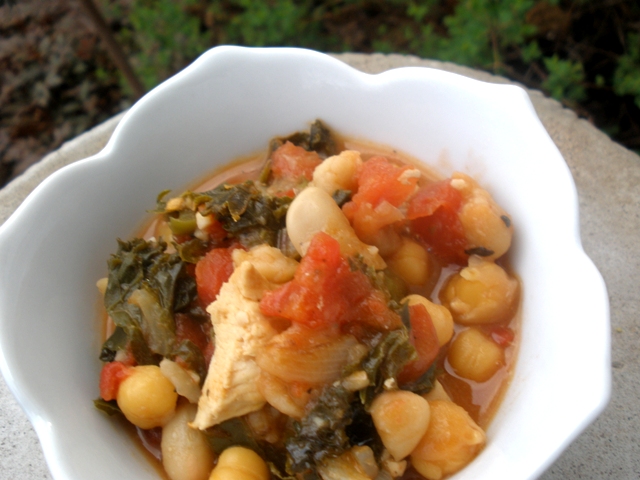 Newly fortified, I return to the manuscript. I delete all the boring parts. Which is 80% of the play. And go to bed. This morning, I am exploring a new idea. But first breakfast. 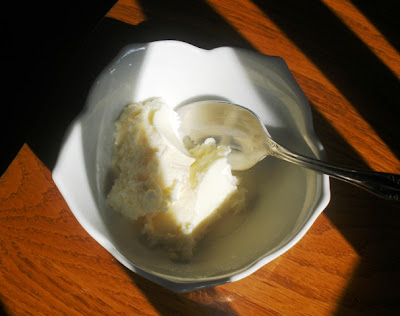 Anyone want to join me for a bowl of ice cream?

soothes the soul and perfectly photographed... my goodness look at all that healthy delicious goodness in that soup,.... I love those chick peas...

Your stew does look healthy as well as comforting. Glad you did not put that gallon of ice cream on the table! Kudos to you for forging ahead and making the great dish in spite of the fact you were not that motivated. Enjoy the day!

Your stew looks delicious! I have a lot of kale in my garden right now….mmmm!

This stew just might be what the doctor ordered Claudia. I've been fighting a sore throat the last 2 days, so cooking just does not appeal to me. And I certainly don't want a mess to clean up.So your one pot stew sounds perfect!
I hope you have a very inspirational day, and that many ideas will present themselves for your play.

Gosh they all look delicious!

I wish I could send you the gelato I made--definitely breakfast-worthy. I'm sure the play isn't as bad as you think, and look forward to hearing more about it!

I love reading your posts Claudia - they are so engaging and well written - and funny too. Ice-cream for breakfast or for dinner - sounds good to me, but then again this wonderful chicken-chick pea dish looks pretty darn inviting.

This comforting dish looks like it's wearing it's Sunday best...so impressive! Yum!

Lol @ the ice cream! Don't we all wish we could eat that for dinner? ;) I am sure this stew was devoured quickly, it sounds like it is full of wonderful flavor :)!

Well, there is always room for ice cream no matter how big the dinner is.
The stew is super healthy and is a winner.

What a comforting and filling stew,Claudia! Absolutely delicious!Love all the flavors!

Dear Claudia, This is a perfect dish. I think you did a fine dinner for the family and Devon and room for ice cream too. Actually, there is always room for a little ice cream.
It looks healthy and delish. I know I would enjoy it.
I hope that you are feeling better soon my friend.
Blessings dear, Catherine xo

This looks like a wonderful combination, Claudia, and I'm sure the broth in the stew will help your cold! I'm a big fan of preblended "Italian Seasoning" too!The only thing I add extra is more garlec and oregano. Rest and feel better!

mmm! Love the sound of your stew! Very healthy indeed! I am in serious need of healthy recipes. Been eating too many cakes lately.. ughh.. lol.. btw.. can I have some of that ice cream? :D

Oh, boy, does this look wonderful...those (you?) Italians have such marvelous and flavorful recipes. I'm so sorry about the cold...ugh...but I'm glad you decided against ice cream and made and shared this delicious stew.

PS...I'm certain your manuscript will be anything but dull in the end.

I miss coming over here. The well written posts and the comforting dishes that you come up with are all the more reasons for me to come and read your posts... and linger around here.
thanks for being there for me as always Claudia. You are an inspiration. Glad to be back home! Thank you!
Malou

I am glad you stuck to the stew for dinner~it looked delicious! hummmm.....so did the ice cream!

I will join you as long as you save me a bowl of soup! You know I love this! It's a given. Hope it helped chased your cold away! Feel better. xoxo

I love stews, they all make me feel a lot better and remind me of home, this one with chickpeas looks amazing

This stew must be scrumptious! That is definitely a wonderfu combination of ingredits.

I'll be honest, I'd probably have both for dinner and wouldn't regret it for a second!

lovely stew and you sure are a good mum

I'm sorry you're sick, but hopefully this stew will bring you back to the land of the living. It looks terrific.

And I've been there with my writing. Don't give up on your play - I'm sure it's much better than you think!

You have combined my favorite foods!! Delicious!

Ice cream for the breakfast!? wow...I think I go for your delicious and comforting chickpea stew first!

First, I'll have ice-cream for breakfast and lunch...followed of course with your very appetizing version of chick pea stew...at least 2 bowls please ;o)