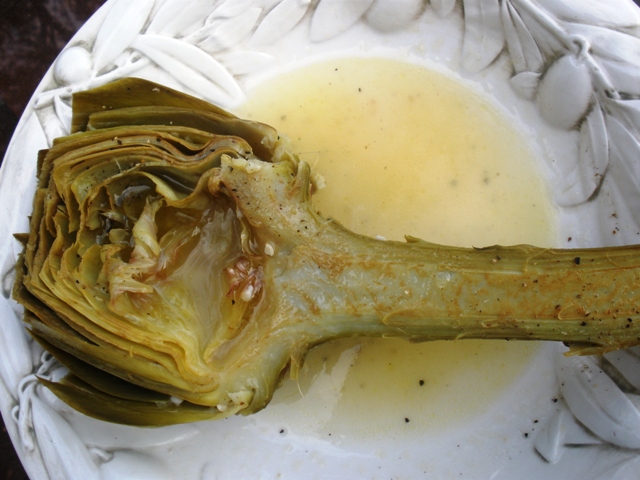 Who first decided that artichokes would be a good thing to eat? Who looked at the prickly-thistled plant and determined, "Must have that for dinner!" I had this discussion with my cousin in New York (which segued into "How did beer happen" and "the whys and wonders of having dogs and cats instead of grandchildren") as well as a myriad of topics that cousins discuss when they haven't seen each other for years.

I would have liked to have been there - at the first artichoke feast. (I'd also like to be at the first production of Hamlet where nobody know that everyone dies at the end. Sorry if I spoiled the ending for you.)  The first artichoke feast must have happened early. By the time of the Romans, artichokes were cultivated and widely eaten. I suspect we have hunger pangs and the early foragers to thanks for the glories of this thistle. 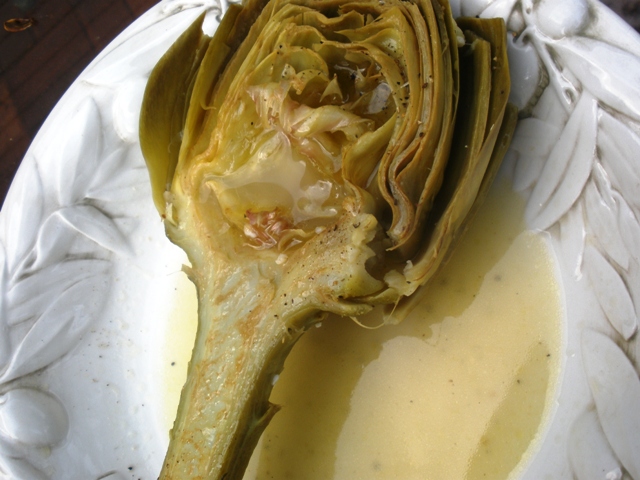 This is so simple. Braised in water, wine and lemon, they become succulently soft and tender in 30 minutes. The stems (with the outer layer peeled) are edible. My kids watched me prep them and thought they were a lot of work to "get to the good stuff." But in just minutes while chatting with the family, the outer leaves of 2 were peeled, the tips were cut off and the artichoke was slashed in half to get rid of the choke. And I might add - the kids were very happy participants in the eating of the thistle.

If you're new to artichokes, Ciao Chow Linda has a primer on "How to Trim an Artichoke." Find it here.

The Ardent Epicure has a post on all-things-artichoke. Find it here.

*If you're Italian or used to artichokes, you're likely nodding your head because you know this recipe. It's the easiest of artichoke recipes. You're thinking of your own recipe - stuffed artichokes, fried, broiled, grilled. But if artichokes ever intimidated you - start with this easy recipe. Success breeds later success. 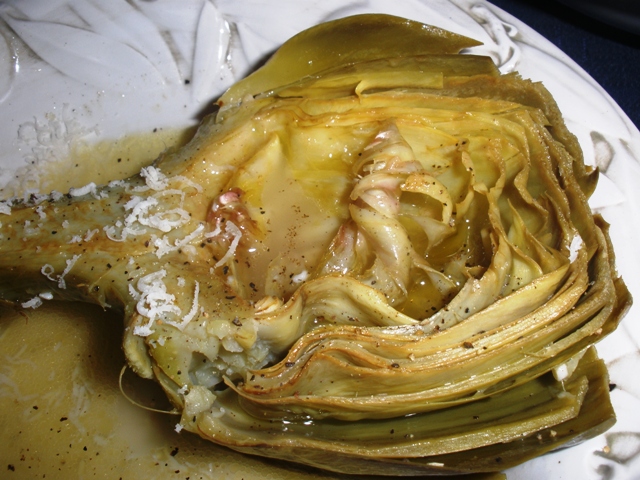 Braised Artichoke Preparation:
In a large stockpot, heat oil over medium heat. Add garlic. Saute till almost browned. (1-2 minutes) Add wine, artichokes, lemon juice, lemon halves, salt and about 8-10 cups of water (really just enough to cover the artichokes). Bring to boil, then reduce heat to medium low and gently boil for 30 minutes. Transfer artichokes to platter and keep warm. Discard all but 2 cups of braising liquid. Return pan with liquid to medium high heat. Add butter. Cook until thickened (about 15 minutes). Mine did not thicken much! Season to taste with salt and pepper and spoon sauce over artichokes. Serve.

It's just a wonderful slurpy mess. I am sure there is a correlation between messy food and laughter at the table. I'm surprised nobody has done a study about that. You're eating a thistle covered in liquid. Messy, earthy, sensual - what's not to like? (And I could continue to sing the merits of cracking crab legs at the table - but I'll spare you.)

It has been written that Zeus came to earth (as he frequently did) and spied a young beauty (as he often did) and seduced her (as he always did). With her consent, he brought her back to Mount Olympus (unbeknownst to Hera). But the young girl was homesick and sneaked back to earth to visit her mom. Zeus was enraged and hurled her back to earth where she became planted and grew - as an artichoke! I suppose there are worse things.

We never knew when an artichoke would appear in the home. I suspect because my mother never "planned" them. They came home when they were looking good to her at the market. She would simply cut the pricklies off the top of the leaves and simmer them whole in water, wine. lemon and herbs. Then serve them cold with dipping sauces. For the tough leaves - we would scrape off the tender inner portion with our teeth. We'd work our way down to the choke. Each leaf unearthed a more tender one - and as a child - this was heaven. It was partly a game - to avoid pricklies and partly an education in deliciousness.

I know it's just a tad early for Small Bites Sunday but then I realized - I can do this - it's my blog! Have a grand week, all! 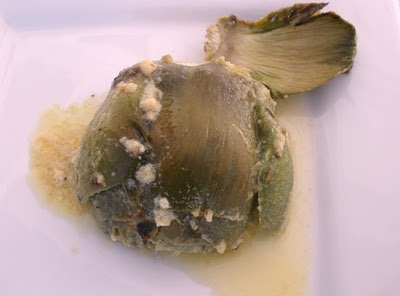 Claudia, This looks fantastic! I have never made an artichoke…even though I love them!

This looks like a special way to enjoy an artichock! I often wonder the same on many things we eat! How did anyone first decide we could eat it?!!

Artichokes are a lot of work for the record time it takes my family to make them disappear! I never ate the stem before! I've been missing out. These are divine.

Claudia, this is such a delicious meal! I love artichokes! this year I decided to grow a few too. :)

My first visit and I couldn't be more pleased with your braised artichokes. I just love them! The photos are very good.

I did not know you could eat the stem!

I am loving your small bites Sunday Claudia. A lot of our meals are small bites now. Artichokes are my BIL's favorite - I'll have to make these for him as a surprise. He'll probably fall in love with you and leave his wife (smile).

I am totally in love with your small bites Sunday! Your artichokes dish is calling my name & my mouth too! :)

I'm the only artichoke lover in this household, but I'm happy to pick one up in the market to treat myself. Simple and lovely preparation, Claudia!

Thx for stopping by Food Stories. I just subscribed to your blog and can't wait to see what your next creation will be!

This looks delicious! I make an artichoke dip, but I've seldom used artichoke in any other form.

Ok I found my artichoke kick off haha. NO but set seriously I am one of those who are intimidated with these cuties.
I shared this with Alisha of Ardent Epicure where her latest post is about taming of the artichoke. Im grateful to both of you for giving me the confidence to tackle my "artichoke fears" haha. But seriously I never prepared one yet so this will be the start... thanks!

These look wonderful, Claudia. I am enjoying your small bites Sunday nearly as much as your family must :-) I really like this recipe. Enjoy the remainder of the weekend. Blessings...Mary

I make my artichokes the way your Mom made them, Claudia, with the addition of some seasoned and buttered breadcrumb stuffing added amongst the leaves. We don't mind scrapping through the tough outer leaves. I always feel wasteful paring them down to the softer inner core.
A friend introduced me to grilled artichokes a few years ago and I also love to make them that way in the summer.

How funny is this? I was in an Italian deli yesterday and bought five artichokes that look just like your picture. I was kind of shocked when they told me the price ($13) but went for it anyway and they were soooo good. But I will have to make my own to save a little $$$ and I love your take on them. I eat them any way I can get them, stuffed, fried, in olive oil and vinegar and whatever other way you can dream up. I too, wonder about who had the courage to try these thistles first - same question about lobsters too. And I never heard that story about Zeus. You're full of interesting tidbits. oh - and thanks for the shout-out too.

YUM! I love fresh artichokes, especially when they are braised without all the heavy breading. Yours look very good!

I love artichokes though I have never successfully cooked fresh ones on my own. I'm going to have to try this recipe!

Being at the first artichoke feast...that must have been such a wonderful surprise to bite into that delicious heart!

Good recipe. I love artichokes, but have never braised them. Nor do I believe I've ever been served them. But this is such a simple recipe! Great idea - thanks.

Dear Claudia, I often wondered too. Who decided to eat this! I am just glad they did. I love artichokes. Looks wonderful. Blessings dearest. Catherine xo

Your artichoke looks great, I always just cook in water with lemon, bay leave and garlic...I will have to try your recipe...looks so tasty and full of flavor :)
By the way, thank you for the links...very helpful.
Hope you hare a wonderful week ahead Claudia!

This looks fabulous! I have never made a fresh artichoke.

I never really had these until I became and adult. I seriously think my mom has never eaten or prepared one!
This recipe looks like the perfect way to serve one. I have a few recipes, but nothing nearly as flavorful as this! Delicious post.

Your line about Hamlet made me laugh. I was once in a fairly dreadful production that was a mere three hours and could not wait until everyone died (except me, since I was playing Osric and was on until the bloody end). But I digress--I'm not sure I've ever seen an artichoke recipe I wanted to eat as much as this one.

Sounds like an amazing preparation of artichokes, a must try!

If I could lick this screen and get half of the deliciousness off of what I see here I would be elated!

A real delicacy! So scrumptiously prepared.

I have never cooked an artichoke Claudia, but this post makes me want to! It looks delish!

I have always braised mine whole...your way sounds so much better.

i think it must be a calabrian thing, but one of my aunts would expend tremendous amounts of time attacking artichokes and breading their tendrils somehow them for the holidays

this looks much easier, and something my kids might actually eat

I love artichokes, but I have never cooked them at home! I have to try it soon!

I love artichokes but have never prepared them like this before - a definite must-try! Just beautiful, Claudia!

I love artichokes but never prepared it at home. However I also saw Alisha's post recently and I'm inspired to try. Your recipe looks excellent! Looks so juicy and delicious.

I like artichokes,but have never prepared them at home. These braised artichokes look very appetizing and you've served them so elegantly, that they are very inspiring to prepare!

Have a wonderful week.

I have never cooked an artichoke. I have eaten them with gusto at friends' houses, but they look like so much trouble. Your version has me drooling, with all of that lovely sauce.

Claudia, your post is making me crave artichokes! Love how you refer to them as thistles (it's our Scottish emblem, not the artichokes but the other variety..)
My kids love dipping them, just as you wonderfully describe. Fabulous!

what a robust looking artichoke. Great for a Sunday meal for sure! Nice finding your blog.