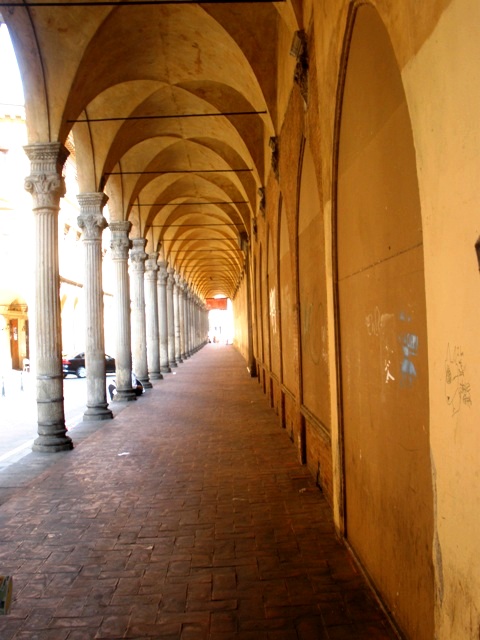 Expect the unexpected. It's the sweet juice in life. Sometimes you think it's a curve ball and you duck but when you come up - if you're lucky - you just may find something new to enchant. And during those moments - you never grow old. 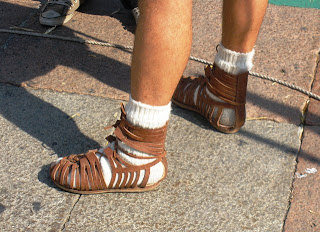 We found a legion of Roman soldiers in Bologna. 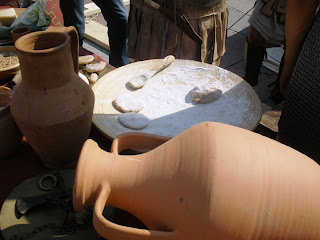 And insights as to how they lived. 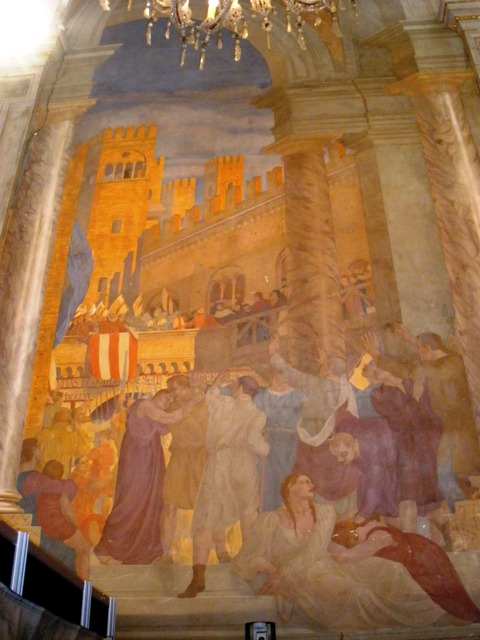 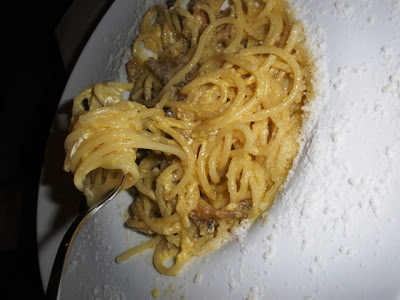 And Ragu Bolognese in every city we visited. You don't need to go to Bologna to have a terrific plate of ragu. And even if an ocean is standing in the way of you and Italy - this recipe will fly you there - as surely as you grabbed the tail end of a kite and soared there yourself. 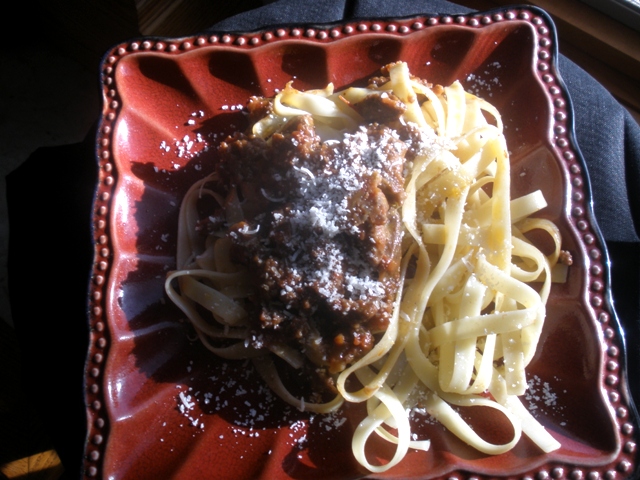 This is a particularly earthy version. The porcini mushrooms just thrust you into the Italian countryside where you think yourself the mighty forager. It's hearty, meaty and substantial. Perfect for a snow day. Especially when the snow day is unexpectedly in Rome!

1/2 pound fettuccine - cooked al dente
3 ounces dried porcini mushrooms (can use less - I used 3 ounces for the doubled recipe)
1 cup beef broth
3 tablespoons butter
1 cup chopped onion
1 pound Italian sweet sausage, crumbled (can use turkey sausage)
1/2 cup dry red wine (I used Sangiovese)
2 teaspoons tomato paste
1 15 oz. can diced tomatoes, drained
1/4 teaspoon nutmeg (a debate raged in Italy in the 1970's as to whether to include nutmeg in ragu recipes)
1/4 cup milk (I used 2%)
salt and pepper to taste
Freshly grated Parmigiano-Reggiano cheese for topping (they say it is optional, I say no - it's not) 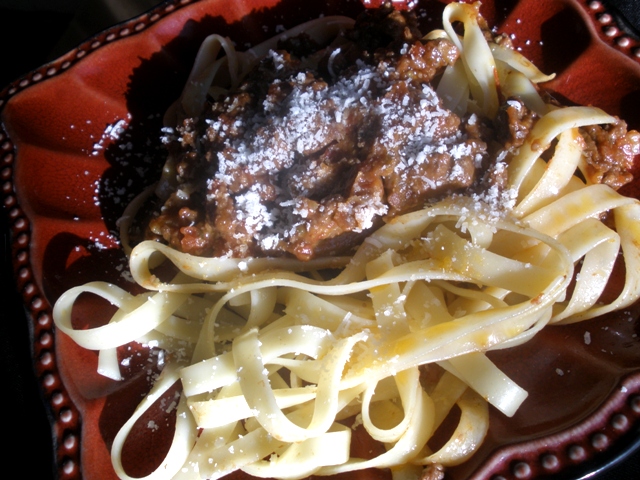 Soak the mushrooms in hot beef broth for 30 minutes. Heat the butter in a large skillet of medium heat. Add onion and cook for 3-4 minutes. Add sausage and cook until no longer pink and you have made it all crumbly with the back of your spoon. (6-10 minutes).

Add wine, mushrooms with broth, tomato paste and tomatoes. Stir to mix. Bring to boil, reduce heat to simmer and cook for 45 minutes, stirring occasionally. (I let it simmer for over an hour - until the tomatoes have broken down and you can barely see them.)

Somewhere during the simmering process cook the fettuccine according to package instructions.
Stir in the nutmeg and milk and cook over a low heat for 10 minutes. (I use freshly- grated nutmeg but the spice police won't pick you up if you don't). Salt and pepper to taste. Mix with fettuccine and serve, passing Parmesan separately.

And note - this is a ragu - not a liquidy tomato sauce - don't drown the pasta! Let the ragu mix with the pasta - not overpower it. 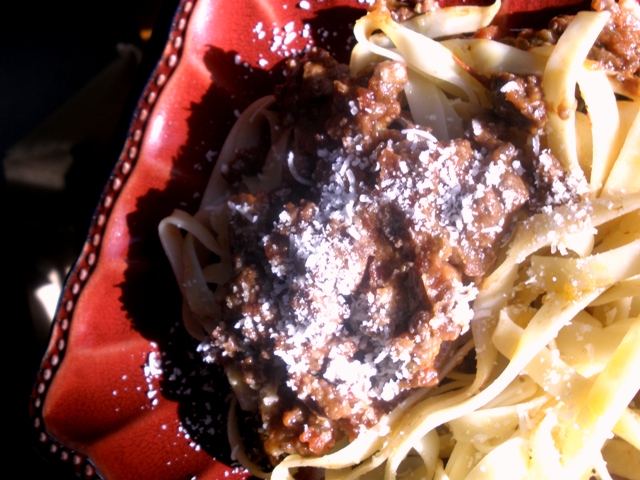 At the Piazza Navona in Rome, we came across a gentleman singing karaoke to Pavarotti. Tears streaming down his face as he sang, he wound up being one of our fondest memories. We returned again and again looking for him. 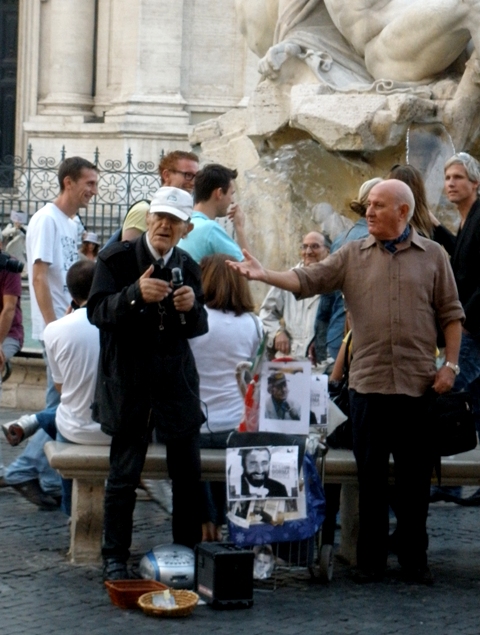 And even though I a have been home for months, the unexpected still sneaks up on me. On Saturday morning, the Twin Cities was paid a visit by the Frost Fairy. 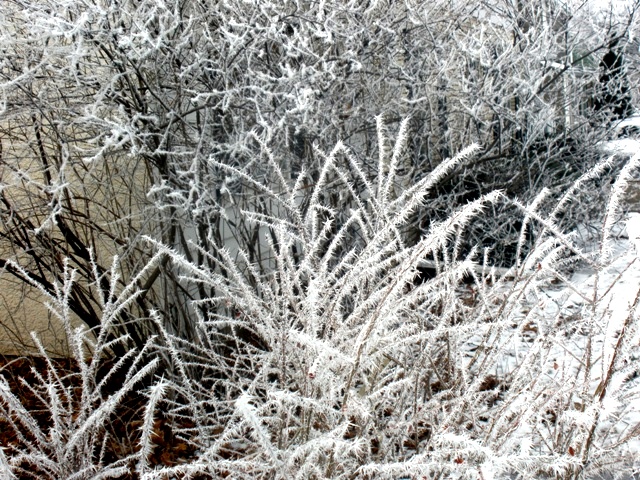 Last winter, we lived on a frozen tundra. This winter we dwell with the frost fairies. 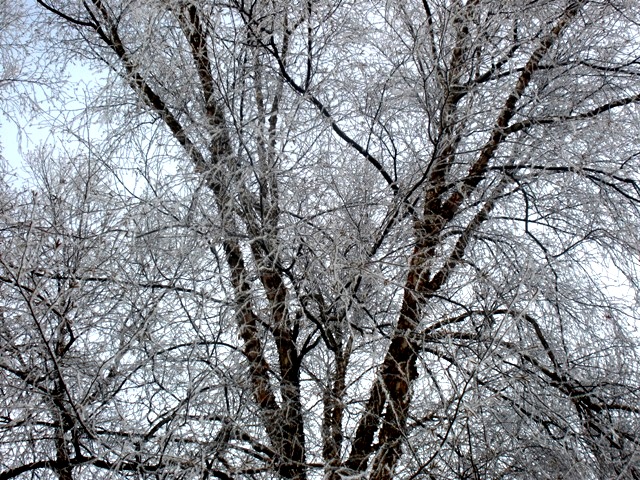 Beautiful post. Those pictures did take me to Italy!

I think all italian cooks need a good bolognese in their repertoire. This sounds delicious!

Frost fairies for sure Claudia. I can't believe it snowed in Rome. A good ragu such as this with mushrooms and sausage will warm a persons body and soul.
Sam

Very nice dish...I make something similar often, at least to me, making sauce and mashing up the meatballs and sausage.. must goes... lol but this is delicious. Oh how I dont miss that snow... you need to move South to keep warm its time1 :)

Oh, I love those Roman sandals...he can keep the socks though. I have a pair, but not as exciting as those! And your pasta looks so wonderfully comforting. We need that here at the moment.
Ronelle

Lovely sights and beautiful aromas in Italy. It makes me want to return!

aww i would be teary eyed if i will hear and watch that man sing! you took me to Rome for an instant with this post... and you know how i love to be visited by the frost fairies Claudia ;P... stay warm... and oh i haven't tried putting nutmeg spice on my pasta but will surely try that... and yes noted, i should not drown my pasta with the sauce. thanks for all the new learnings!
malou

This was an amazing post. I love to see pictures from other countries, especially italy! Also, the recipe does look fantastic. Between the mushrooms as well as the sausage, that is enough to get my vote. Thanks for sharing this!

I think my favourite photo was the legionnaire with sports socks! Why do men do that to their sandals? It seems to be an international phenomenon... ;) Theresa

I'm always happy to see a good bolognese sauce. And you're so right about not drowning the pasta with sauce. I'm also glad to see you included the milk, a classic requirement.

Andi of My Beautiful Adventures said...

Great pics and now I want some pasta!!!

Dear Claudia, I grabbed on to the tail of that kite!! Looks delicious and so enchanting. Blessings my friend, Catherine xoxo

Sausage ragu? Sounds and looks delicious!
Enjoyed the pictures...thank you so much for sharing them Claudia.
Hope you have a great week ahead :)

Oh, what lovely photos and memories of Italy. I'd love to try your yummy sausage ragu...it sounds perfectly marvelous :)

I think I could easily skip the pasta and just eat the ragu by the spoonful!

Oh, those photos! I want to go everywhere in Italy, and that makes trip planning so difficult. Thanks for sharing those and this delicious recipe.

One of my favorite dishes~a true taste of Italy. I just made something similar this weekend.....it warmed my soul! Your photos are wonderful!

A fabulous dish! So scrumptious and comforting.

I always love eating Ragu from childhood. There is something about this food who caught my heart. I "study" all kinds of recipes to make Ragu. I'm ready to try your recipe next! Can't wait!

What a fantastic dish - hearty and delicious - so glad I stopped by your blog!
Mary x

I eat pasta a lot and this definitely makes me want to eat some again!

I'm hungry right now and so your Ragu is so temping Claudia.

Your pictures of the frost are simply beautiful! Makes me long for some cooler weather and at least a little snow before spring comes.

I love the idea of adding the porcinis to ragu. They have such a wonderful flavor. I'll definitely be trying this recipe next time I make a ragu.

Your photos are just beautiful....I loved visiting Italy through your eyes and the frost photos are gorgeous! I think we will be getting a visit tonight!
Your ragu looks incredible! I think I'll try this one soon!

Your ragu looks amazing! Such a great comfort. And I love your pictures - the man singing karaoke is priceless. So cute! There hasn't even been snow fairies here.

A good plate of pasta gets me to the table practically skipping...especially since I've disciplined myself to have it only once a week...sigh.
This recipe reads as the perfect combo to what I remember having when I travelled to Bologna many, many years ago. Nutmeg does make it a little better, but most of my friends are not too enthused about it.

Claudia...I'm thrilled you enjoyed yourself. Sharing all your wonderful memories is what makes this post special ;o)

Thanks for the wonderful trip to Italy. Glad you had a great time. Ragu looks so yummy I took a spoonful from the photo. :)

Claudia, thanks for introducing this place to us. The wall painting looks beautiful. And so is the pasta. Oh yeah, I came to know that most of the places are icy cold right at the North. Some even under -52 degree. But here in Asia is very very hot.
However, hope you're all well.
Blessings
Kristy

What lovely and diverse photos! Although I've been to Italy a few times, I've never visited Bologna. If I'm lucky enough to go back again, I must remedy that.

And I loved your photo of Piazza Navona! We saw a few performers there, but not your soloist.

You cast a spell on me today. I was charmed by your post, particularly the old man channeling Pavarotti. The photos were wonderful, your pasta delicious and the ice storm pretty enough to take to to the palace of the Snow Queen. Have a wonderful day. Blessings...Mary

I have never made ragu with these mushrooms and next time I will pay a visit to the Italian market in town to get these!

I love all your photos of Italy, Claudia! They are perfect backdrops for your rich and gorgeous looking ragu. I know that the pasta should not be downed in sauce but I admit to being guilty in that department..lol. Dried porcini mushrooms are a small fortune around here -- did you bring yours back from Italy? They really do add the most glorious flavor to everything!

This ragu sounds amazing with the porcini and nutmeg. I would have never thought to add nutmeg in a tomato sauce, I will have to try that next time.

Hi Claudia,
I know that there a gazillion ways to prepare 'ragu' (which my family has always just simply called it 'spaghetti sauce'; not being from the Northeast). This recipes sounds very interesting and I need to spread my Italian wings and fly with greater variety in my repertoire! Thank you for sharing your lovely photos, especially those of Italy that I can only afford to live vicariously through. Most importantly, thank you for your poetic use of language . . . it's a joy to read after daily papers of mundane vocabulary used in today's college students' papers (business students that is!). You've got one of the best blogs going and I appreciate reading your penned (word processed?) words!
Ciao amica, Roz

A nice dish! never been to Italy but you introduced me to the insights thru your pictures and poetic language.

PS...yes, my lentil soup calls for a whopping 3 qts of chicken broth. It came to the rim of my stock pot :/

Your photos of Italy are a feast for the eyes, Claudia. And I can see Mother Nature paid you a chilly visit. That bolognese should keep you warm!

I'm hungry...and we have given me the most wonderful idea for lunch NOW.I'm rushing to the supermarket round the corner (yes, Franprix is open on Sundays!)
Thanks!

This sounds fantastic! Love the use of sausage.

What a lovely recipe! I make ragu often, but a vegetarian version based on the mushrooms :) However, as stingy as I am, my guys are meat eaters and would truly love this :)
And I am loving the earthy warm flavors, along with these amazing photos from your trip :)