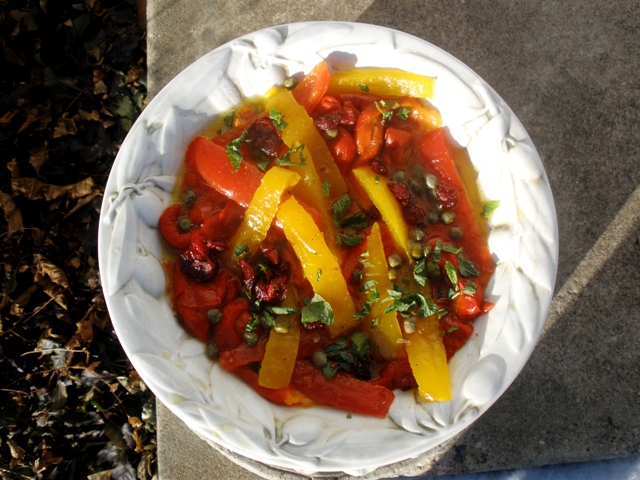 I wasn't sure. Roasted red peppers with mint? And currants? Where was the garlic? The basil? The savory mixture I grew up eating? But I made it as written. My mother was sure.

"This tastes just like Grandma's." And so I tasted it. And was finally sure. It was lovely.

The Roasted Red Pepper Salad comes from Christopher Hirscheimer and Melissa Hamilton's Canal House Cooking cookbook. The two women are number 33 on Gourmet's list of 50 Women Game Changers in Food. Hamilton is a former editor of Saveur and cut her cooking chops with a restaurant in New Jersey as well as at Martha Stewart's Living and Cook's Illustrated.

Christopher Hirschmeimer was one of the founder's of Saveur. But her work at Metropolitan Home Magazine is what brought her to acclaim. Hirscheimer is widely credited for changing the face of food photography. She added the artfully messy contrivances to the photos - letting go of the former "helmet hair" mentality that stalked the photos for decades. 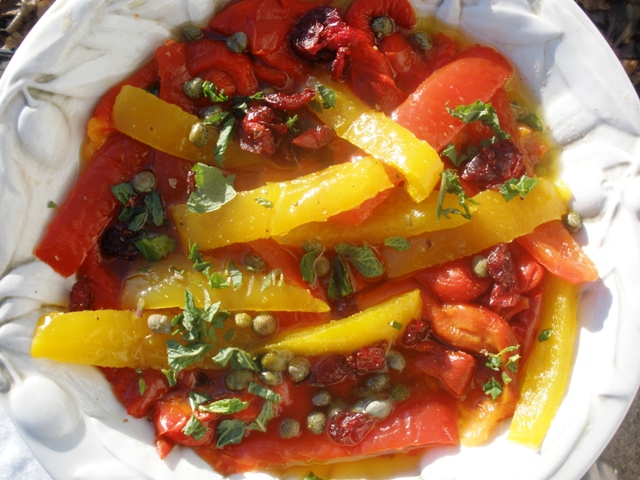 The two women had been friends for years and as many do, grew tired of the commuting/corporate world and -co-founded Canal House as a photo/design studio for food. That soon branched out into cookbooks - 3 volumes a year of 75 seasonal recipes.

"Canal House cooking is home cooking by home cooks for home cooks," is their mantra. Read more about the two women here.

Roasted red peppers in February? Is that seasonal? Well - sort of. If you roasted bushels of them back in September and then froze them for use all year round! All right - I get a "D" for seasonal cooking here. But an "A" for good taste! 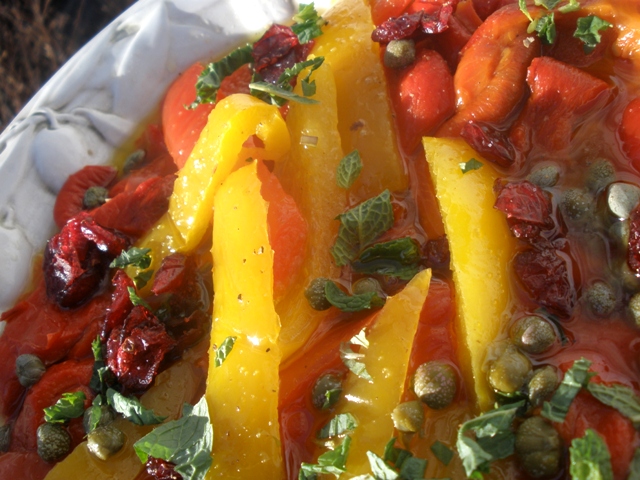 Roasted Red Pepper Salad
1 cup olive oil (I used a little more than half of that)
2 tablespoons currants (can use raisins, I used craisins)
1-2 tablespoons capers
juice of 1 lemon
4 red bell peppers (I used a mixture of red and yellow)
1 small handful of mint leaves - chopped or torn
salt and pepper to taste

I do love bringing color to the table. Come February, I am starved for reds and yellows. And a little green. 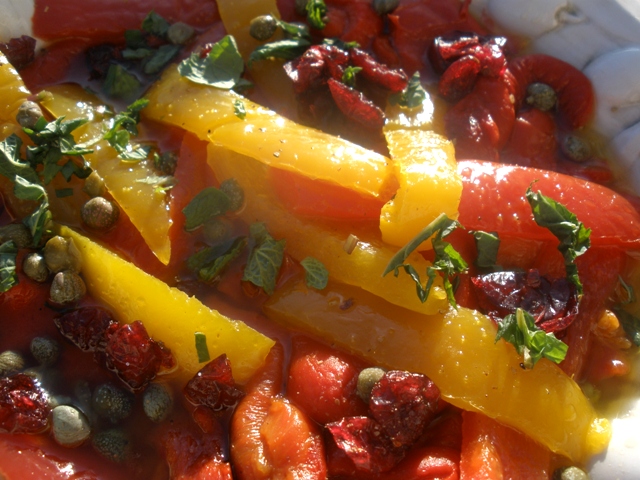 I am coming to NYC with daughter the last week in March. It's been four years since I visited my little hometown. My baby cousins are full-fledged children and Eataly awaits! In early March I will be in Utah with Under a Midsummer Moon and the end of March - in NYC. I clearly don't have the hang of going to warmer climes in the winter!

Please check out what the other bloggers are doing for Week 32 of Female Chef Gourmet Game Changers. And if you want to join in the fun, e-mail Mary at  One Perfect Bite. Mary started this delectable journey.

Claudia, this is a really beautiful salad. These gals create food that is as pretty as it is delicious. Your is an especially good example of what makes their food unique and their books/magazines so popular. I hope you have a great day. Blessings...Mary

This calls for a nice loaf of crusty Italian bread.

this is go with Italian bread...looking awesome

Your recipe sounds so yummy...can't wait to try! This is right up my alley! The picture is making me drool as well!
http://cosmopolitancurrymania.blogspot.com

Love roasted peppers. They are so good and colorful! Great dish!

I will need to try this version of roasted peppers, it does have some interesting ingredients. Also, your picture here is pretty enticing. Nice read about the Canal House cooking and those two amazing women. Enjoy the weekend!

It's so vibrant...I love it! I'm trying to imagine that combo...the sweet the salty...and I imagine it is amazing :D

That's a yummy combo of flavor and colors - love that hint of green to go with the fiery red and yellow!A perfect comfort food:)The Canal House part was a good read too!Have a nice weekend and great times ahead!

I love the taste of roasted red peppers. This salad with currants
and capers must be a true delicacy. I can't wait to try it.

I never tried to freeze roasted peppers, always can it. Maybe next season I'l try a little. Interesting combination, I just bought some mint, need to try over weekend: we eat a lot of roasted pepper this days (from the jars I put by last summer). I love that plate with olives, it's just so beautiful! I know, I told you already... Have a very good weekend!

Claudia, What a wonderful salad...I know what you mean about being starved for some red or orange veggies. This salad is so appealing! I'm going to bookmark this one. Nice post!

love roasted peppers made a pesto with it last night

This is a great salad and roasted peppers make everything taste better, I love them in everything! Especially pizza!

I'm with you--I never would have put that flavor combo together. But those colors! Such a vibrant dish for the middle of winter.

You are so lucky to have those roasted peppers on hand! This is beautiful! I would be tempted to add garlic too.

Thanks for the shout-out Claudia. I love the pretty color combo here - and never would have thought to use mint and capers but I'll take your word for it and try it. Hope to hear from you when you are in NY. Maybe we can meet for lunch or dinner.

Claudia, its really nice to meet you. Thanks for stopping by. I really like your blog. Fantastic recipes with beautiful pictures. I love Italian food and defiantly will back :)

A wonderful salad and sometimes letting go of garlic and basil is fine! :)

You do get an "A" for good taste! An "A" for a beautiful dish too. I love when dishes are simple and uncomplicated, and still explode with color.

I wouldn't have thought of raisins and mint in this salad other but it comes with high accolades.

This is one dish I could eat alot of...and not put on too much calories, I like!:D

I love this! Roasted peppers are one of my all time favorite things :)! I love that you have different colored ones here, and quite the interesting combination of ingredients.

That is such a colorful salad. I am going to come back later to copy it down.

Sounds great to me. Like the idea of currants + capers.
LL

I'm looking forward to reading posts about both of your trips! You must be thrilled to see the production of your play.

Seasonal or not, the salad looks terrific.

Not the way we ate them growing up, for me either. But this sure does sound good.

Cristina, from BA to Paris said...

Amazing colors for a cold and snowy Parisian day...One of my favorite antipasti to be shared with friends...
Baci,
Cristina

I adore roasted peppers, and although I'd probably raise an eyebrow at a few of these ingredients, too, it really looks amazing! Have fun with all your upcoming travels :)

I've got peppers frozen too, except I roasted them first and I bet they'll come out sort of mush-y, so that's why I'd probably use them in a soup or sauce. However, I still buy fresh peppers even tho it is off-season for them. We do our best I think, and I think your cooking sensibility is admirable, Claudia! Happy Sunday afternoon! Wish you could be here to enjoy the warm 70 degree weather. It's time for me to go outside and mow the lawn now! I'm really serious!!!!

This is absolutely delightful! And we can get them from various parts of CA thought most of the year...I adore peppers :)

Love the colors!!!I love peppers and this salad sounds delicious!

This salad screams summer! At least we have the glorious colours of all those peppers to tide us over until then...Theresa

What a colorful dish~loving the capers tossed in there....

Any chance I get...colourful peppers are tossed into my meals. A salad like this would be welcomed, however, I have to admit to probably leaving out the extra sweetness from the currants. I also never went for my 'Nonno' putting them in his meatballs neither. Just a personal thing ;)

Have a great day,
Claudia

This looks so pretty! I never thought to add mint to roasted peppers but I'll definitely try this in summer when my mint plants are growing.

A fabulous dish! I am a real sucker for bell peppers and capers.

This salad is a riot of color, Claudia, and looks so delicious with the capers and mint.