It was in an apartment development in Fresh Meadows (Queens) called Meadowlark Gardens, New York City where I began this love affair. It was a one-bedroom apartment. The living room held a black and white TV console complete with rabbit ears. There was a sleep sofa against a long wall (where I was sure a skinny werewolf could hide) and the room was shaped into an "L". The "L" section had the quintessential 1950's formica table where we gathered for dinner every evening. I loved the speckled pattern in the formica and would stare at those speckles (especially if broccoli was being served) until the patterns twinkled back at me and the table morphed into the sky and I was one with the formica. (Zen-formica, anyone?) It was at that table where I fell in love with vinegar.

My mother had a wooden, sturdy salad bowl and served salad at least 4 nights a week. (Thank-you, Mom). I remain a salad fiend because of her and that well-seasoned wooden bowl. She would dress the salad with oil and vinegar just before dinner. My mother, the wooden bowl and the vinegar magically transformed lettuce into food fit for gods.The sounds of her tossing lettuce leaves was my cue to wait while she returned to the kitchen so I could start sneaking lettuce leaves out of the bowl and into my mouth. After dinner, I would drink the remains of the oil and vinegar dressing. Most satisfying.

It wasn't until I was 17 on a date at a fancy-schmancy steakhouse that I learned there were other salad dressings. I didn't even know salad dressings came in a bottle! I had flirtations with blue cheese dressing, then Russian and even a brief crush on Green Goddess (the link brings you to Cinnamon Spice's version) - but in the end, I always returned to oil and vinegar. And oil and vinegar always forgave me. I still don't mind taking a spoon (I've come a long way) and having the last of the sour-puckering fermented liquid. But that's probably too much information. 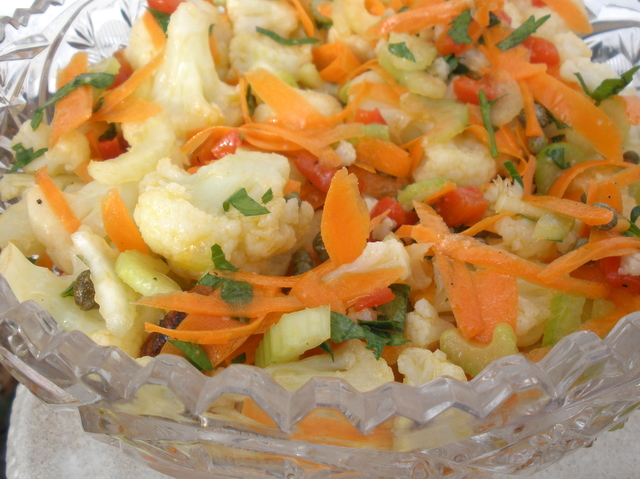 It's no wonder I took to this Insalata di Rinforzo (Reinforcement Salad). It's so named because it is constantly being "reinforced" with added vegetables, or extra dressing to stretch it to last for the week. The salad is fortified with 1/4 cup white wine vinegar. (My heart thumps just typing this.) And really - couldn't we all use some reinforcements during December? The recipe hails from Campania and is true comfort - from vegetables! 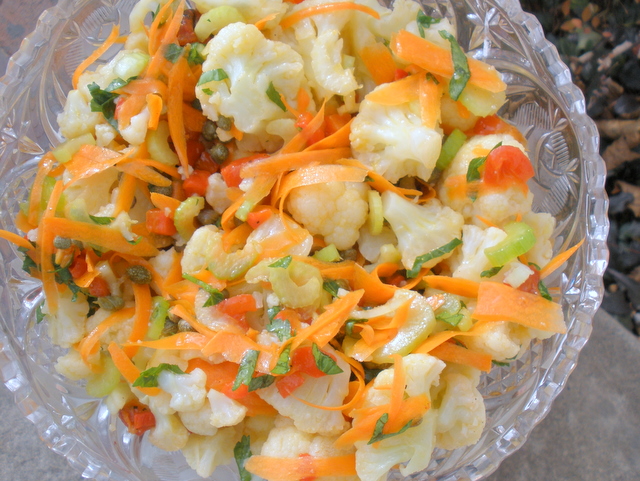 Cut the cauliflower into bite-size florets, discard tough stalk. Bring a medium-large pot of water to boil and. add the cauliflower florets and some salt and cook until just tender - 6-7 minutes. Drain and place under cold water to stop the cooking.

In a large bowl combine the cauliflower, celery, carrots, red pepper, capers and parsley. You can add the olive oil and vinegar right into the bowl or whisk them first in a small bowl. Cover and refrigerate one hour or overnight. The salad just gets better and better. Bring to room temperature before serving.

Play with the salad as the Italians do. Think it needs an anchovy or two? Add it. Want to try broccoli? Why not? The beautify of the salad is because it uses solid, firm vegetables - it does not wilt - it just tastes better every day. It's perfect for a buffet - it never gets soggy. And it's winter pretty - glistening white with speckles of color. And it has heft - not every salad can say they have that. I know there's a lot of tasty butter, sugar and eggs floating around blogosphere these days. A salad break can't hurt!

While I wish I could offer you all my formica-zen moments, I understand that not everyone bonds easily with speckles. In its place, find the Drifters below singing "White Christmas." It's winter magic. I have a crush on the tenor-reindeer (don't tell Paul or Vinegar). Play this every time you need a break - I guarantee you'll smile.

Oh the flood of memories you just made me rejoice looking back at mom making that herb garlic dressing in the wooden bowl. It was always a little greasy and I thought it was dirty back then, only now I had realized that taste was unique to the best salad I had ever eaten... are you sure we arent sisters... lol or twins? Nah you can write a heck of alot better and tell the story the right way. THe oozs and ahs.Yep I cant spell either, but one things for sure, you are right on with your love for vinegar and why, mom always made the impressions of where everything was born... thanks for taking me back to a wonderful time in my childhood, I had really forgotten... xo

Your stories are a bit like tornadoes. They have a vortex that pulls us in for the ride. I loved your post today. There are worse things for you than vinegar :-). Your salad is so gorgeous that confirmed vegetable haters will reform their wicked ways. I hope you have a great day. Blessings...Mary

What a beautiful story and such a delicious salad! Thanks for sharing! :)

I wish I could tell a story only half as good as you...I was the exact opposite...I only knew of bottled salad dressing as a chid...Thousand Island...Your salad sounds delicious.

I can't remember where I too, discovered oil and vinegar. Our family was a Ranch dressing kind of family..As much as I enjoy discovering other dressing, I always return to a simple homemade vinaigrette.

The vegetable salad that you present here is a perfect reminder that simple is indeed best.

It is good that you didn't know dressings came in a bottle when you were young! My parents relied on them sadly and I was never exposed to good homemade dressing until I made it myself in college! This salad sounds delicious, I love that it is something other than greens and the dressing is so simple.

I guess most of us from Italian households knew only oil and vinegar for salads. I still cannot tolerate a bottled dressing. This salad is in my future and god knows I need more of these healthy type foods in December.

My Mom makes her salad just as you described - she doesn't dress it until were ready to eat and it's always oil and vinegar - heavy on the vinegar - with a sprinkle of Italian seasonings. Your salad is like a breath of fresh air! I need this lighter food right now - feeling bogged down with heavy food. Thanks for the green goddess wink.

That's an awesome salad and it's perfect with the oil and vinegar dressing, so nice!

Yes, I can still see my parents yellow formica table! I just wish my mom had made homemade dressing instead of buying the bottled french stuff. But I still have good memories.
I always enjoy your stories Claudia, and this salad is one I'm bookmarking. I think it will be someting my husband and myself will enjoy.
And I loved the song.

The dressing story for me was that I knew all the creamy ones first (thousand island, green goddess) and then came across the lighter oil and vinegar. The oil and vinegar became a favorite.
Good eating habits starts with the parents and it is a shame that more parents are not serving salad four times a week!
Thanks for posting a salad break, you do have good timing.

I picture a herd of drifting reindeer charging down the LIE in search of a good salad.

My mom ALWAYS made oil and vinegar dressing also (and I grew up in Queens! Maspeth) and so it will always have a soft spot in my heart. Totally a great go-to!

Wonderful story . . . I felt like I was there! And although I can't drink vinegar (!) I love a simple well-made dressing of oil and vinegar. It really takes such a little bit of effort! And what a a difference. Hope your holidays preps are winding down -- enjoy your Christmas!

Just getting over being sick...I think this salad could definitely reinforce me! In his early 20's, my husband worked at Formica!

I just found the perfect salad to bring to a party on Saturday night. The combination of oil and white vinegar is always good together as it sits for a while. I have my mother's coleslaw recipe with the same combination.
The singing reindeer and santa did bring a smile to my face.
Have a wonderful holiday.

Thanks for sharing this recipe. I was looking for a healthy salad for the holiday buffet table. I just found it! I have just added you to my google reader so I don't miss any of your posts...I enjoy my visits here.

I am not much of a vegetables person, but with that tasty sounding vinegar dressing, I think I wouldn't mind some too!

Have been eating lots of sweets last few days...and I am really in the mood for something light, delicious and healthy. This is a perfect salad for the dinner.

I think I've always been a fan of vinegar. I can't remember a time I didn't enjoy it.

I am a big fan of salads and look for new ideas to make better salads. Thanks.

You have a beautiful writing style. I enjoy reading this.

Oh, this is one I could have parked in the fridge and eat day after day! My kind of salad! I know I'd throw in some artichoke hearts~

This is indeed a lovely change from cookies! I adore good salads, but don't ordinarily use cauliflower as a base ingredient. This looks really interesting!

I would have to say that most Italians and Italian-Americans would opt for the sweet simplicity of oil and vinegar dressing salads over anything bottled . . . I have yet to discover any decent bottled dressing. This is an interesting salad, Claudia, I've never heard of it, but like the whole idea of 'replacement' . . . and yes, anchovies would make this or anything better!

The reindeer stole the show in the cartoon video!!!!

lovely salad and your mum did a stella job

my love affair with vinegar started even before i learned how to walk haha.. but seriously most of our Filipino food is spike, simmered or dunked with vinegar... this salad will definitely find its place in our table because.. yes there's vinegar in the dressing :)

I can't believe it, Claudia! You've just described my childhood salad experience to a T! Oil and vinegar - not emulsified or mixed in any way beforehand - on the lettuce, stealing it from the bowl, and then when the meal was done fighting with my brother for the leftover dressing!

Your salad is awesome. Almost exactly the same as my ma's cauliflower salad, in fact, and there's wisdom in that because cauliflower can take lots of vinegar. In fact, ma used to add a little vinegar to the cooking water, as well. Yum!

I grew up thinking I didn't like salad, because my mom only served French dressing (from a bottle). As I got older and moved away from home, I discovered the delights of oil and vinegar!

I love making homemade salad dressings...and this salad looks perfect. After a long day of Christmas shopping, I'm hungry, and visiting your blog makes me thankful I can spend tomorrow in the kitchen! I hope you are having a blessed holiday.

What wonderful memories, my family frequently prepared salads with just oil and vinegar as well...I did not drink the remaining dressing though :) I do frequently just go that way myself and with all of the goodies in this beauty who would need more :)