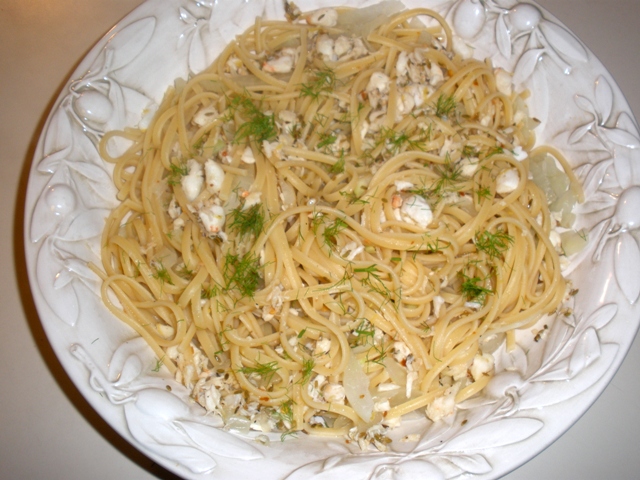 For the last 25 weeks, I have been jumping to my computer on Fridays to look at the recipes prepared by the bloggers cooking from Gourmet's list of 50 Women Game Changers in Food. The list has brought about lively debate and discussion throughout blogosphere and now - with life merely at a hectic place, I am thrilled to join the discussion. The first 25 game-changers were chefs and food writers that I was well-acquainted with (Julia Child, anyone?) The last 25 are fairly new to me. Even if I know them, I haven't cooked from/with them.


I thank Mary from One Perfect Bite for starting this extraordinary journey. If you would like to join in the fun, e-mail Mary for information on how to get started. Do visit her blog if you haven't already - her dry wit, honest assessment of recipes, travel stories and scrumptious offerings will bring you back to her blog again and again.


For week #26, we are cooking from Rose Gray (a Brit) and Ruth Rogers (an American). If you've ever travelled to London pre-1987, you likely went for the theatre, the history, the art, the royals, the Thames, the posh accents, the fashion - but you certainly didn't go there for the food. Rose Gray and Ruth Rogers changed all that. When they opened The River Cafe in 1987, the British got their first taste of Northern Italian cuisine on English soil.


Gone were the red sauces that populated London (and I love red sauce) and in its place was pasta mixed with seafood and/or vegetables, focaccia, an all-Italian wine list and an open floor plan that delighted all including the owner-chefs. Rose Gray mentioned  that she felt like she was in an actress with the restaurant as her theatre. Every night was opening night. I can certainly relate to that! 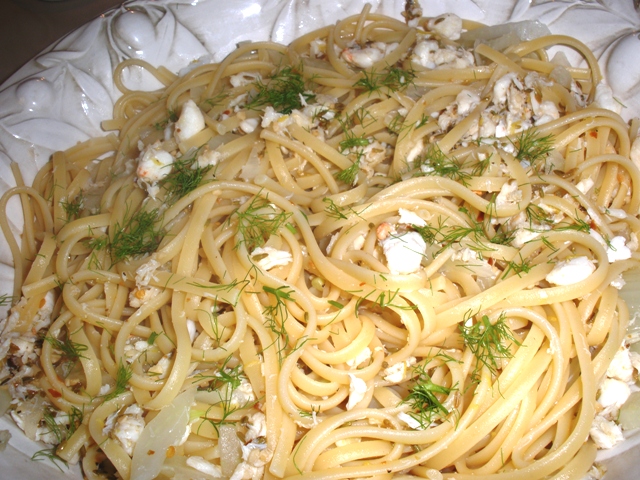 Rose Gray and Ruth Rogers met in 1969 and although their paths crossed many times on both sides of the Atlantic for almost two decades, their partnership did not begin until the opening of The River Cafe in 1987. Described as bohemians, iconoclasts, they were two women who knew their own minds and believed in things passionately - whether it was food, art or politics. They lived many lives before that! Proof positive that life does not offer one direct path. There are forks and detours and one is never sure where the paths will take you but if you have an adventuresome spirit as they did, you can be in for a glorious ride. 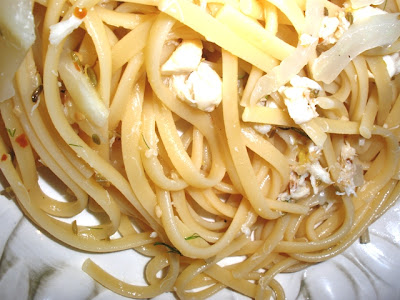 I chose to make linguine with fennel and crab. And while crab is not exactly local in Minnesota (although we do get fresh crab from the Gulf Coast through November), fennel is still abundant and has not been trucked in from other countries.


Rose Gray and Ruth Rogers pioneered seasonal and local in London - way before the movement had taken off. This was an offspring of Rose Gray's time in Lucca where she duly noted how the Italians ate, what they ate and when they ate it. They influenced many chefs to do the same - most notably Jamie Oliver who trained under them at The River Cafe. One year after opening, The River Cafe earned a Michelin star which it retains to this day. Not too shabby for two self-taught chefs who would find themselves at the same protest marches for years before they decided to work together! 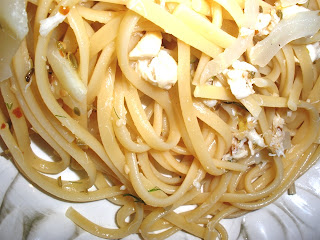 Linguine with Crab (from The Guardian, UK reprint of easy recipes from The River Cafe))
Linguine 320 grams (about 3/4 pound)
400 grams (about 14 ounces) crab meat - you may use canned - but avoid the $1.99 ones at Trader Joe's - there are better ones to be had - usually at the fish counter
1 fennel bulb
1 garlic clove
1 tablespoon fennel seeds
2 dried chilies
1 lemon
extra-virgin olive oil

Linguine with Crab Preparation
Remove the tough outer part and stalk of the fennel. Slice the bulb as finely as you can across the grain. Keep any of the green tops. Peel and finely chop the garlic. Crush the fennel seeds and crumble the chilli. Grate the zest of the lemon, and squeeze the juice.
Heat two tablespoons of oil in a thick-bottomed pan, add the garlic, fennel seeds and chilli, and cook to soften. Add the crab, lemon juice and zest, and season. Stir through, just to heat up the crab.
Cook the linguine in boiling, salted water for five minutes, then add the fennel slices and cook together until al dente. Drain the pasta, keeping a little of the water, and add to the crab mixture. Stir thoroughly to combine, adding a little of the reserved water to loosen the sauce if necessary. Serve with olive oil.
If cooking crab yourself, buy them live and choose one or two large crabs - it will be much easier to pick the meat out from them than from many small ones. Cock crabs (males) have larger claws and a higher proportion of white meat. Spider crabs are very sweet and good for this recipe, though it takes longer to pick out the meat than from the common crab, as the meat-to-shell ratio is lower.
I did use a good quality canned crab! And in truth, the next time (yes, there will be a next time) I will use more crab. The crab need to hold its own against the anise-flavored fennel and I wanted more of the sweetness of the crab for balance. But I did like the nuances - sweet crab, licorice fennel (somewhat muted from the simmering) all balanced with the mellow linguine. The dish is a wee bit white, so I added some of the fennel fronds for color. As for the ease - it couldn't be easier or faster and that is always a plus for those busy days. 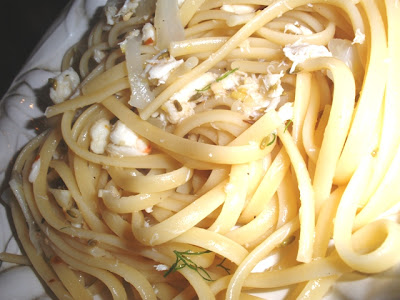 The River Cafe spawned many cookbooks. Take a look at them here. Sadly, Rose Gray passed away in February 2010. But her presence has been noted and her legacy will carry on to future generations. A moving tribute to her by the New York Times can be found here. And take a look at what the other bloggers are cooking from this dynamic duo. Their links are below.

Such a thoughtful write-up, Claudia...I really enjoyed it! And I would really enjoy a plate of this beautiful pasta in front of me.

Your first post with our crew is "bloody wonderful." No snarkiness intended. Your backstory is terrific and the recipe you've shared is to die for. I'm so glad you've joined us. Have a great weekend. Blessings...Mary

I love this recipe, fennel and crab sounds like an incredible combination. I notice several of the recipes today use dried chilies, that sounds wonderful too. Welcome to the group Claudia---now I have to check out your Carrots in Marsala...

Way big yum! I love pasta in any form (red sauce or no) and this looks delicious. I also love the idea of fennel with the crab. I'll bet that was a delicious dinner on a cold Minnesota night.

Claudia, A wonderful post and a lovely pasta! I would love it for dinner tonight...will have to put this one on my list. It looks delicious!

Mmm what a delicious pasta dish, this looks so amazing!! If you haven't already, feel free to stop by my blog and check out the $50 Williams-Sonoma gift card giveaway going on right now! xoxo

What a nice light pasta dish, and a wonderful tribute to these two amazing women.

I'm embarrassed to say I didn't know these chefs at all, but if this food is indicative, I'd say hurrah for them and for the changed food scene in London,

Had it not been for your article, I would have never known about these fascinating women; now I want to know more! This pasta dish is perfect, not too heavy with stuff but with a great combo of flavors. I say even without the crab (using a different fish) it is going to be excellent

Claudia, this dish is right up my alley. So pleased you chose to make it. For once, it was difficult to choose! A simple crab pasta dish is perfect. Love the fennel!

I love pasta, I love crab, and I love fennel. This dish is a no brainer. I'll be making this one very soon! Great choice.

I think that his dish exemplifies their philosophy of simple and yet flavourful cooking with the best ingredients available. It is a must try!

The cooking group sounds so interesting, and this recipesounds like a wonderful combination of flavors, Claudia, and one I will try very soon. The BJ Wholesale Club store sells fresh de-shelled crab in a tub that will be perfect for this!

That looks just fabulous--and I love the use of the fennel fronds. They are too pretty to waste.

Leave it to women to change up the culinary game, Claudia. What a thoughtful post.

Fennel, crab and pasta oh my! Whats not to love ? The pasta looks wonderful here, I could eat a pound all by myself... what a thoughtful post, very good read at that!

This looks marvelous, Claudia...and I enjoyed the history of these two chefs. One of my favorite pasta dishes is from their Italian Country Cookbook.

This pasta dish looks delicious. I enjoyed reading about the history of the two chefs.

The recipe is great, but I especially love the back story! Thanks for sharing.

I like the fact that these women championed other women, too -- in addition to creative cooking. Love the linguine.

What a great post! I'm glad you joined our group Claudia.

What an awesome cooking group! And this pasta looks so yummy!

Definitely my kind of food, look at all those crab swimming in your pasta! Yummy!

Seafood is probably my favorite class of ingredients - can't wait to try this, but might have to wait til I get home and someone will share it with me!

The linguine looks so great! I am really glad that you use REAL crab.

I have been craving some kind of crab pasta for a couple of weeks. Seeing your delicious post just made the cravings stronger. So simple but I can imagine all the fresh flavor on that plate. Yum!

This is a reminder to cook with crab more often! And fennel... such a unique and wonderful pairing. I have been enjoying the game changing posts too - glad to see you joining in!

Oh my, first Mary's recipe with the lemon and now yours with crab meat. Hm, maybe I'll combine them both. Thanks for the idea! :)

You had me at crab! Gosh what a great dish you picked for this weeks game changer. Thanks for sharing.

How fun that you're joining in!

Such a wonderful post...makes me want to stay in tonight and prepare this for Ryan and me. Don't you love crab? We certainly do. Thank you for sharing with me. I hope you have a relaxing Sunday!

Great to learn about Rose Gray and Ruth Rogers and the pasta sounds excellent!

I just read Val's post on Rose and Ruth too. Nice to learn more about them. The pasta dish looks perfect.
LL

What a wonderful post and tribute to these great women! The pasta dish is wonderful as well, love the clove and fennel :)