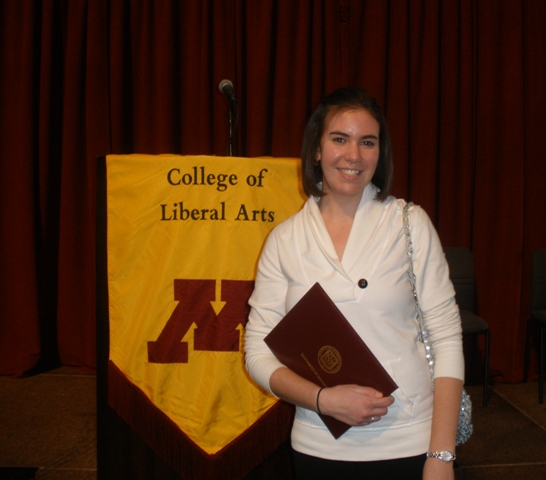 I am going to digress for just a moment with the post regarding Anne-Sophie Pic. It's coming. My mind is fluttering.  There are things you think about when you first have a child. "Will they talk?" comes to mind. And of course they do - and they not only talk - they have opinions. And they belong to themselves. And it's a wonder. A day may come when you're sitting at a concert and your daughter is performing a flute solo and your mind races through time - to the curly-afro child who never let you comb her hair (she has since embraced the world of hair straighteners) - to the 5 year-old climbing on high kitchen cabinets to snare a cookie when she thought her mother wasn't looking - to her 13-year old rebellion when she refused to bring home the "red folder" from middle school because she didn't need a stupid folder to bring her parents school notices. She could do it just fine. She wasn't a child! But she was and now she isn't. Well, she is when she goes out at night to search for pre-made cookie dough because her mother hasn't supplied her with cookies - and it's finals week. But she isn't when she is a college graduate. And she is. And she worked for it. The little girl who brought home stellar report cards with the only admonishment "Quiet. Could participate more" is on her journey to be an audiologist and work with the deaf - specifically young children. There's a smile here - my quiet school girl working to open up a noisy world for others. 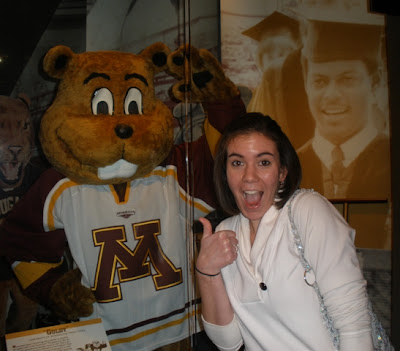 And another smile - because she can still be goofy. I think "being goofy" is a necessary life skill. 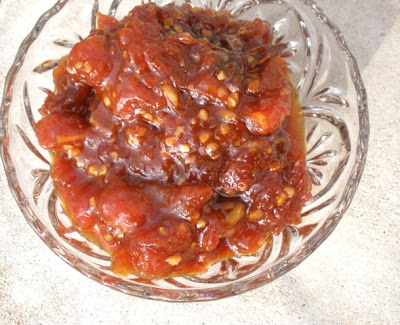 And now we segue from musings to today's planned post - tomato chutney by Anne-Sophie Pic. This isn't my best transition into a new scene! Thank goodness this is a blog and not a play. 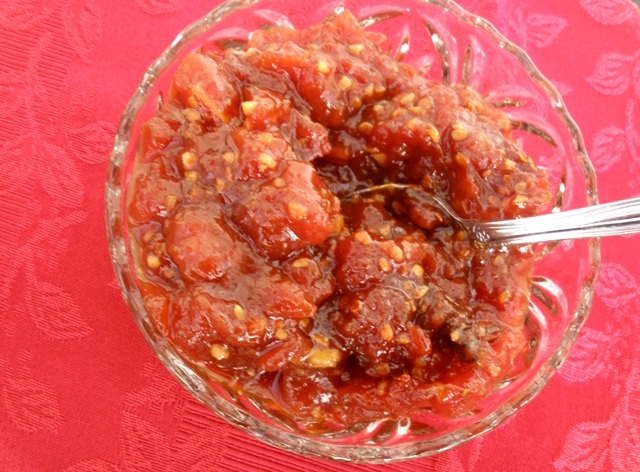 Anne-Sophie Pic is to the kitchen born in the best sense of that phrase. She is chef at "Le Maison Pic" and "Le 7." "Le Maison Pic" was founded by Anne-Sophie Pic's grandfather, Andre Pic, in 1936. (And Andre's mother had previously run a restaurant there as far back as 1891!)  Andre grew-up watching his mother cook local specialties. He apprenticed under some of France's top chefs, came home and took over the business. In 1934, "Le Maison Pic" was awarded 3 Michelin stars. Thrilled with his new status, in 1936 Andre moved the restaurant to its present locale in the heart of Valence. During Word War II, the restaurant lost it's 3rd Michelin star. But when Andre's son Jacques took over, the restaurant regained the coveted 3rd star in 1973.
Jacques and his wife Suzanne (Anne-Sophie's parents) brought the restaurant to international acclaim. Over the years, the 3rd star was again lost in 1995 and after over ten years as Chef, Anne-Sophie reclaimed the 3rd star in 2007. She is the 4th female chef in France to achieve 3 Michelin stars. You can imagine the drama in those stars! In 2011 at age 41, she was named Best Female Chef of the year by S. Pellegrino.
Chef Anne-Sophie is a self-taught chef with a very good pedigree. She did not study the culinary arts in college - she studied business and indeed began her work life in the world of business. Eventually she returned to the fold and began cooking. While staying true to her father's vision, she has her own inherent sense of combining ingredients. This tomato chutney recipe is an excellent example. Just look at the ingredients - all full-flavored but they do not compete. They combine to layer flavors - so that the sweetness of the honey and tomatoes begin your tasting journey but you are treated to a pit of pungency, a little sour and a brief hint of hot before you finish a bite. 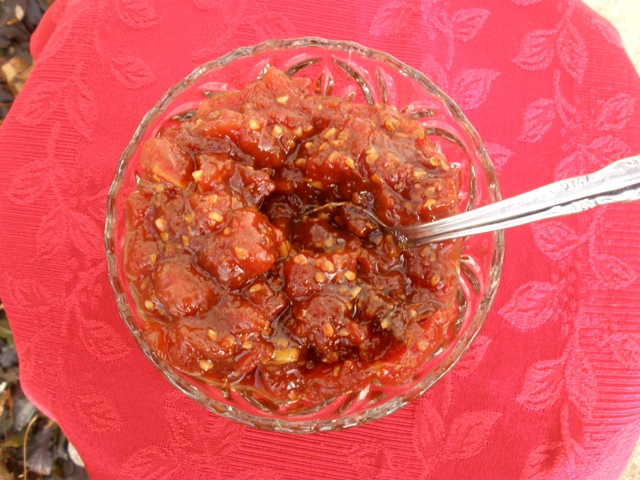 Cut an X in bottom of each tomato with a sharp paring knife and blanch tomatoes together in a 6- to 8-quart pot of boiling water, 10 seconds. Transfer tomatoes to a bowl of ice water to cool. Peel off skin with paring knife, beginning from scored end, and discard. Coarsely chop tomatoes.

Cook sugar in a dry 2-quart heavy saucepan over moderate heat, undisturbed, until it begins to melt. Continue to cook, stirring, until sugar melts into a golden caramel. Remove from heat and carefully add vinegars. Stir in remaining ingredients and simmer, uncovered, stirring occasionally, until thickened, about 1 1/2 hours. Discard star anise.

Chef Anne-Sophie Pic serves this chutney with a skewer of rabbit liver and kidney. I - won't. I will be slathering this on sandwiches and serving it as an accompaniment to pork. But having spoon-fed myself quite a bit of this chutney - I think it would a be a welcome accompaniment to chicken, steak and fish. It embraces all. Don't eat meat? Mix it in with rice or use it as a topping for crostini. It is an equal-opportunity small dish.

Please check out what the other bloggers are doing for Week 28 of Female Chef Gourmet Game Changers. And if you want to join in the fun, e-mail Mary at  One Perfect Bite. Mary started this delectable journey. We are taking a holiday break and will resume the posts after the New Year.

Congratulations to your new graduate!

Wow, she's all grown up and is so beautiful! I do know how you feel...my daughter just turned 17, not far behind. I enjoyed this post, and a great recipe!

They grow up too fast! At least I still have one at home.

The chutney looks delicious. I'm sure it would be stellar with a pork roast.

Oh who cares about transitions. The part about your daughter was so endearing I wouldn't care what followed. But the chutney looks delicious nonetheless.

Congratulations to your daughter and to you, too. You have much to be proud of. The chutney looks wonderful. I have had chutney before, but not tomato. Must try this.

How proud you must be. Your affection for her is hard to miss and beautifully expressed. The salsa is very nice it but pales in comparison to your memories of her. I hope you have a great weekend. Blessings...Mary

What a wonderful post! It is so poignant to read another mother's love and pride because it reminds me of my own love and pride for my children! Your daughter has chosen such a wonderful path! You've done a good job on bringing her along her path ... and the chutney! I'm sure Anne-Sophie would say, 'Magnifique!' How's that for a segue? Wink, wink!

Congratulations to your daughter! My kids are five and three so I have a long way to go but enjoyed reading your post as a mom. :-)

Congratulations! I can understand how proud you must be of her:) That chutney looks amazing!

Congratulations to your daughter! What a lovely post, Claudia. They grow up so fast, don't they?

Claudia, you must be brimming with pride and you can tell through your words. Bravo to your graduate daughter and congratulations on her choice of career path. I'm also a fan of Anne-Sophie Pic (preparing a post next week on one of her recipes) and love the look of this chutney. I'd want to smother it on most things, too! Great post.

Congrats to your daughter! Good to have a moment of reflection on the moments of her life's journey growing up to the place she is at today.
The savory tomato chutney here is amazing-fantastic recipe. I enjoyed this post. Have a great day!

Congratulations to the whole fam damily! You must be glowing with pride...Theresa

After going through the list of ingredients for the tomato chutney, it must taste fantastic! Reminds me of a vindaloo paste made for cooking chicken/pork (famous in southern India-Goa)
I would love to try this recipe out. This would be perfect with my Indian meals

Congratulations to your beautiful daughter!!! Job well done...you must be bursting with pride :)

Your daughter is beautiful! Congrats to her :)! Your chutmey sounds delicious! I would love some on a piece of curried tofu! Hope you are having a great weekend :)!

Oh, my beloved U of M. Very happy to share an alma mater with your daughter and congratulations to her! I was also the child whose report cards said she was too quiet, and now no one can shut me up

Congrats! The tomato chutney looks fab. I've bookmarked it for a day when I have a basket full of tomatoes :)

Congrats! Enjoyed reading your post. I can virtually taste the flavours of this chutney on my palate! Delicious!

Oh, proud mama! You brought tears to my eyes with your words...I can't believe how fast the time goes.


And that tomato chutney...holy cow. It looks rich and flavorful and I would love to try some!

What a moment!! Congrats to her, and to you...You are probably at the origin of this success!!

What a lovely tribute to your daughter. She sounds terrific, and you're obviously very proud of her. Isn't it great to watch your child grow up into an amazing person?

Congratulations to your beautiful daughter on her graduation, Claudia! Her chosen profession is a noble one and dear to my heart as I have two young grand nices that wear hearing aids.

I'm back from an early Christmas celebration in Colorado with my children and grandchildren..wonderful times! Now to catch up at home...

My daughter is now 24 and spread her wings. Your own daughter is gorgeous and fun loving!! As for the chutney this is a side I would love to serve for the holidays with a nice ham or roast.

What a beautiful daughter you have. I wish her all the best in her journey of life.

I really am intrigued by the chutney. I think it could be so delicious with many different things from a roast to a little cream cheese on toast.

Congratulations to your lovely daughter!
The chutney looks wonderful and would be a perfect addition to holiday tables. Wonderful tribute :)
Happy Holidays Claudia

A big congratulations to your daughter! I want to slather that chutney on a burger! Or put it over some eggs! The layers of flavors sound amazing.

A big applause my friend...you have a lot to be proud about ;)

...Dear Claudia,
Just briefly passing by to wish you and your loved ones the finest of Holiday seasons.
I'm very much looking forward to hopefully soon joining my Foodies again ;o) Until then, all the very best towards a desirable New Year.

How exciting for you and your family! A new graduate! Love any kind of chutney, so I shall add this to my collection! Happy Holidays!

I'm sure you're so proud of your girl. My girl is 17 this year and just completed her final year exam. Results will be out on March and she's planning to be a teacher. I know she'll do well.
Btw, hope you'll have a fabulous Christmas and wishing you & your family the very best. Have loads of fun & laughter. ((hugs))
May god bless you all.
Best wishes
Kristy

Congratulations to your lovely daughter! What an achievement! You must be ever so proud!

Mom has got to be proud how exciting and satisfying.

That chutney sounds divine. I'm thinking of it now with some nice cheese and nibblies.