Winning Panettone and a Winner

There are many legends surrounding panettone - a delectable Christmas confection of a bread from Milan. Most of the legends have to do with love. So it was with great delight that I arrived home with my love from our Italian getaway - a country of love - to two boxes of Bauducco's Pantettone welcoming me. For fun, find some of the stories about how panettone came to be here. 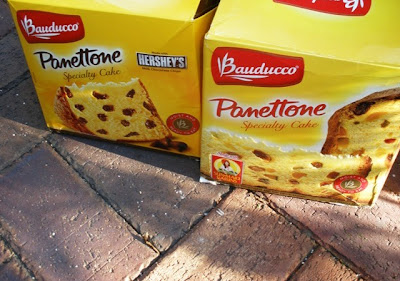 After two weeks of feasting and not any cooking, I was anxious to get back into the kitchen. After I slept for two days. The Bauducco Panettone was given to me as part of the Tastemaker program at Foodbuzz. I have made Panettone. It's not the sort of thing you put together in the morning for your evening meal. And it shouldn't be. It's for the holidays - it's celebratory. It takes a wee bit of work. 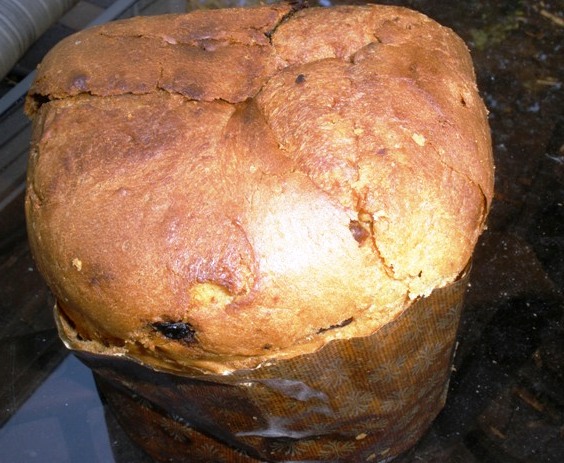 I was greeted with the scent of vanilla as I unwrapped the package. Soft and pliable - it is not the panettone sold at most grocers over Christmas. One loaf - designed for stuffing contained raisins and the other loaf - designed for French Toast and bread pudding contains bits of chocolate. So, it was not the traditional Milanese load containing many fruits such as citron.

I made the stuffing first. I traditionally make sausage-apple stuffing - I like it savory. This was to be a sweeter stuffing - with additions such as dried apricots and sour cherries. It felt like autumn in my kitchen. Outside it was 87 degrees F (I think Minnesota did not want me missing Italy too much so it arranged for a second summer - I felt all sultry - autumning it in Rome - at home). 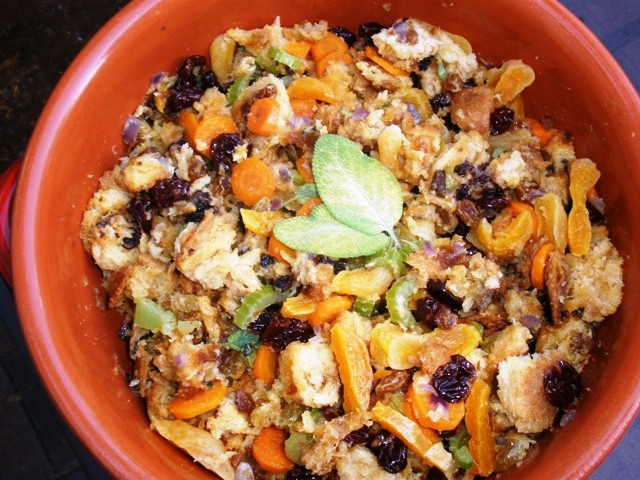 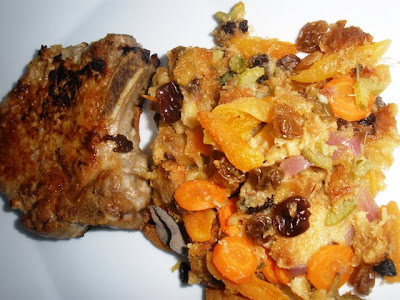 I paired it with a simple pork chop. The family swooned. This was perfect autumn fare - dried fruits, sage -- and the stuffing was packed with autumn colors. I'm glad they were thrilled but I did wonder - perhaps they were tired of my sausage-apple stuffing after 20 years? They loved the sweet. And they all had stuffing for lunch the next day.

For the last two years I have made Ciao Chow Linda's Panettone bread pudding - it's impossibly rich and I feel decadent and wicked when I add all those eggs and heavy cream. After being so good in the days leading up to Christmas - a little wickedness always seems in order. So you can use Linda's - or you can use Bauducco's. They both evoke warmth and the cozy. Below is Bauducco's. For Linda's... follow the link. 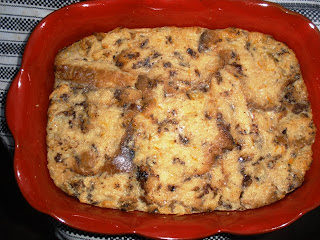 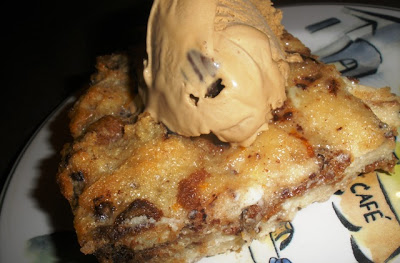 I later baked them again for fifteen minutes and cut them into squares and served them the next day to a group as "bars." The group loved the tender, fluffy vanilla-scented bites.

Both dishes were delicious. The panettone was light and really you could just slice it and eat it. But as I said - if you want the traditional - this does not include all the fruits that it is famous for but it does make for one satisfying bread slice! Spread it with Nutella or a rich berry jam. You will evoke smiles. Now for the giveaway.... 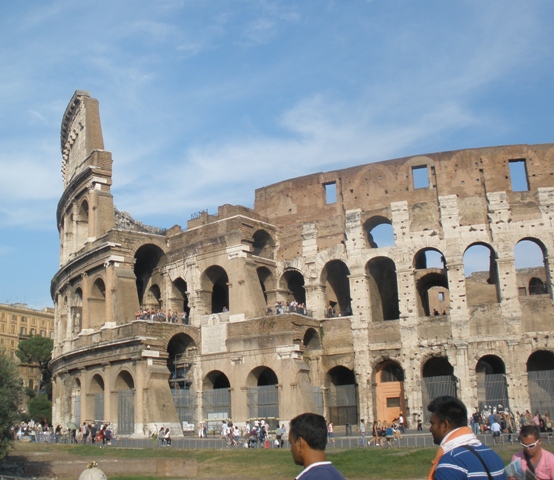 (Don't you love random people in your photos - do you ever make up a story about them?)

The winner of  The Cuisine of Italy from the Random Number Generator was #1 - Claudia from What's Cookin' Italian Style Cuisine. Congratulations to Claudia and I will be gathering your info to get that out to you ASAP. Thanks for the warm welcome home, all. There's no place like home... and there's no place like Italy.

Lucky you to get those delicious panettones to try and you did try them in such perfect dishes! wish I could savor some! I missed that Colliseum while I was there and am still regretting it to this day and dreaming of being back there one day:)

Claudia, this is the first time I've heard of this panettone stuffing. This sounds fabulous - no wonder the family swooned at this one! Must give this a try on my Corsican mother-in-law.

The pudding also looks wonderful, as is the last photo. That place freaked me out, just thinking of the gladiators and life at the time. As for the people, bet the dude in the pink shirt and sunglasses has a few stories to tell...

Oh boy I am over whelmed besides delighted cant wait to try that pudding too ..... I love pannettone so much I am not sure I will be able to cook with mine... its just delightful! I am so excited Thank you so much! I love Italy too but never lucky enough to have the time to go... maybe someday :) xoxox thanks so much Claudia!!!!

I just may have to make 2 stuffings this Thanksgiving....our family recipe favorite and the Panettone Stuffing!

I've never heard any of the panettone stories. I feel utterly deprived ;-)

Congrats to my friend, Claudia, on the win!!!

I love panettone but have never attempted to make it. Love the lure surrounding it too. Aside from just eating it, the only things I've ever done is make French toast with it and bread pudding. Delightful twists on traditional dishes. I'm inspired to make stuffing now!

What a fantastic use of the panettone! Both dishes look delicious.

How appropriate for Claudia to win that cookbook. Congrats!

Oh how I love bread pudding, it's close though with that salty caramel gelato thrown in. I think you should have told the tale of your long lost brother in the bottom of the photo, he he. I'm sure you are Luna meeting was no accident. Lovely stories both of them, it must have been magical.
-Gina-

What a lucky lady you are to return home from Italy, only to get to play with 2 loaves of Panettone! The bread pudding looks to be right up my alley...Theresa

Wow what a great recipe, this looks fantastic! :)

The result of these panettone premix is amazing! You have just changed my prejudice against the premix.

Is it Thanksgiving yet? Well in Canada I guess. I want that stuffing. Thanks for the shout-out and yes, I do make up stories about random people. When my daughter was young, we'd pick out people walking by and elaborate on what we thought their "story" was.

Each year, I buy a panettone...I tear off pieces and dip into my coffee. It never occurred to me that I could make stuffing-Oh so very good. I may never look at this holiday bread the same again.

Lucky you for having a holiday feast! A preview of what's to come. Your stuffing looks incredibly good. I love it plain smeared with butter.

This is decadent!
I love a pannettone bread pudding, so why not a stuffing??? WOW!

wow love the idea of making a stuffing :-) looking forward to seeing your ploughmans lunch he he

I adore panettone, I simply have to eat it first, it is the best baked good out of Italy if you ask me (well, with sfogliatelle). This is a wonderful way to liven up pork.

For several years now, I've wanted to make pannetone and have been too timid to try it. Nudge me some more! lol

I know all of those people in that picture! We were having a family reunion of sorts that day. I thought yould were going to stop in and say, "Hi!".

Congratulations to Claudia! And I love your photo of the Colosseum. Brings back wonderful memories of an amazing city.

A delightful treat to accompany our upcoming colder days. A warm cup of coffee with a spoonful of nutella may just accompany as well. LOL

Congrats to Claudia for winning that great recipe book you brought back from la bella Italia;o)

What a great idea using panettone for stuffing. I will have to try theis one.

This is teh first time I see panettone for sth savory..I mist try this..I'm sure it is to "die for" Thanks!!

There is nothing quite like a good panettone!! Yum!

The bread pudding looks so good with all those ingredients in it.

What a wonderful and delicious idea, Claudia! I love panettone...I will save this for the holidays!
Blessings, Catherine

Congrats to the winner & those panettone recipes are to die for,..really tasty food!

Your stuffing and bread pudding both look wonderful. Thanks for sharing.

it must be a delightful feeling to receive a box of panettone with a sweet vanilla smell.
Good take too on making them into stuffing and pudding. I would love to have either or better both? haha.
I hope your Sunday is lovely,
malou

Feeling decadent and wicked is something we all need in life sometimes. Lucky you to receive such a rich bread from Foodbuzz.
Sam

I got my Italian cookbook today, cant wait to try some of these awesome recipes.. again thank you so much I am delighted to have some authentic recipes from the many wonderful parts of Italy, I love the book ! Thanks so much Cant wait to get started...

I love panettone! Those are great recipes. I particularly like the bread pudding. Simply divine!