Pasta Luna and a visit from the Fairy Hobmother

While I was away, many things happened. My daughter had to crawl on the roof to rescue Pippin who managed to dislodge a screen and fall out the window. All went well with the rescue which is good news. The other good news is I was gifted by the Fairy Hobmother for leaving a comment on Kim's Stirring the Pot - My Kentucky Home blog (which I read regularly). I came home to an Amazon gift card! Thank you so much Fairy Hobmother! And the other good news is that you may be gifted by the Fairy Hobmother also - just by leaving a comment on this blog. You never know...

First - the recipe. It begins here. On the Adriatic in the town of Milano-Marittima. I came here to see where my Godfather - Uncle Canttaneo (known in America as "Chuck") grew up. He was a gentle man with a hearty hug. He had a rose garden in Queens. And his paintings graced the walls of his home. I can still hear his greeting to me whenever I walked in the front door. 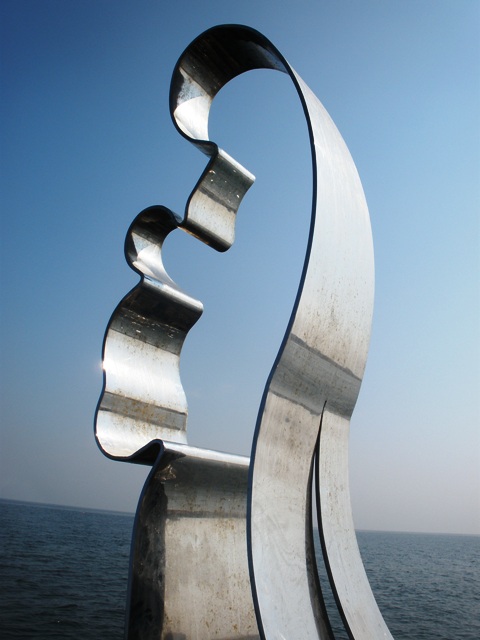 I must start with Biancaneve - the hotel run by my Uncle's family. We didn't stay there because after trying to book by phone, my lack of meaningful Italian (I speak food) was a barrier. And while I had met some of my Uncle's family - I had never met his nephew. We had no intention of strolling into their lives unannounced - just planned to snap a few photos on our morning walk.

But first,  the recipe gets interesting here - on the terrace of a restaurant.  A dog came in from the street and immediately gave us a joyous greeting as if to ask:

"Where have you been? I've been waiting for you!" 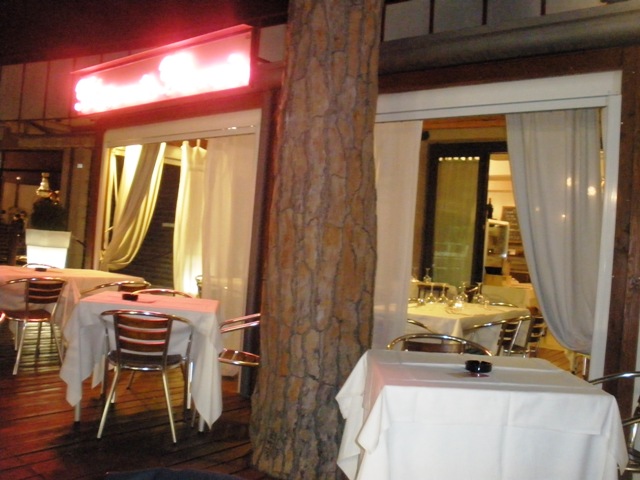 The dog's shy owner tried to shoo her away from us. Indeed the waiter was most insistent that he do so. But this was one determined dog. She wanted to be our friend and she simply slipped under our table and refused to come out. In the worst Italian, we asked the owner the dog's name.

"And your name?" we asked the dog's human.

As Lorenzo went under the table to retrieve Luna, Luna fled and she and Lorenzo embarked on a Keystone cop chase around the terrace of the restaurant. The waiter was not amused. We were. Luna returned with one more happy greeting and then allowed herself to be captured. Lorenzo and Luna went on their merry way. Paul and I enjoyed our encounter with Luna and Lorenzo but now it was time for seafood.

The next morning we made our way to Biancaneve. Click on the link for some lovely photos - it's all seaside rustic charm.  As we turned the corner and saw it, things happened so fast - I didn't get good photos. I held up my camera and three people came from the house - Signora Berti and two of the staff. I didn't want them to think I was a hotel-stalker, so (again in broken Italian) tried to explain my tenuous relationship to their hotel. All they needed to hear was "Canttaneo" and before you could say "ciao," Paul and I were inside enjoying cappuccino and crostada. 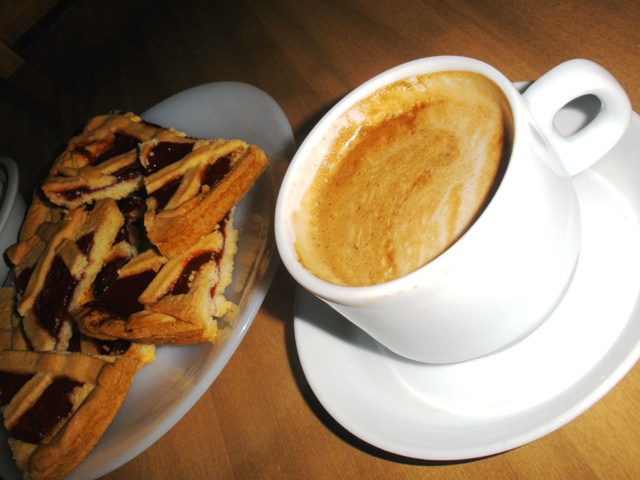 And then - in walked Luna! 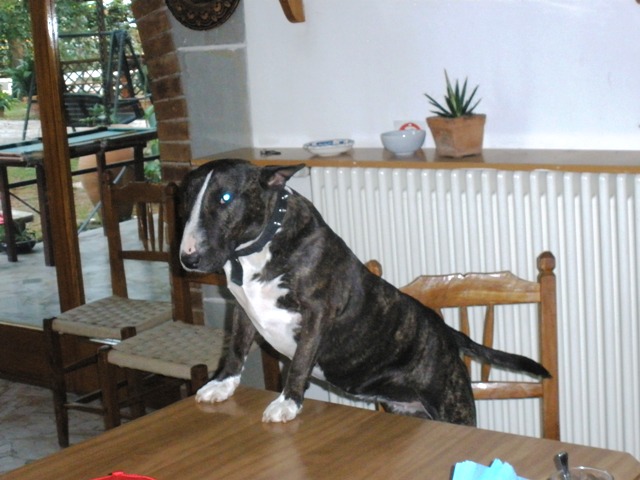 And in Italian, I hear a surprised, "You know Luna?"

And Lorenzo soon followed Luna into the dining area. It felt like old home week. It felt good. It felt right. Luna look satisfied. As if she had planned this.

It was arranged that my Uncle's nephew Marcello would meet us back here for lunch. So after phone calls and Italian-English charades, Paul and I explored the old town. 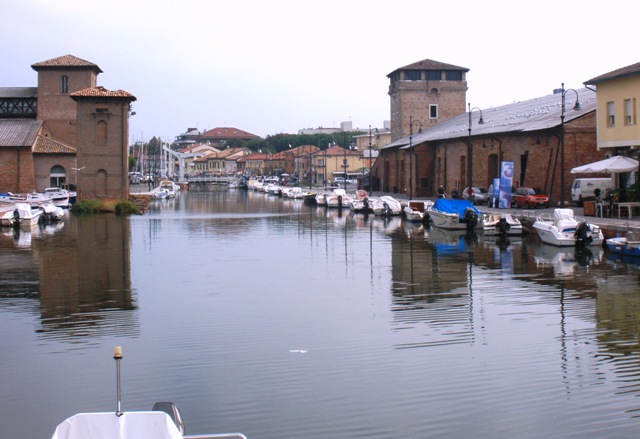 And returned for lunch. All four courses of it.

The pasta - which I now fondly think of as Pasta Luna. 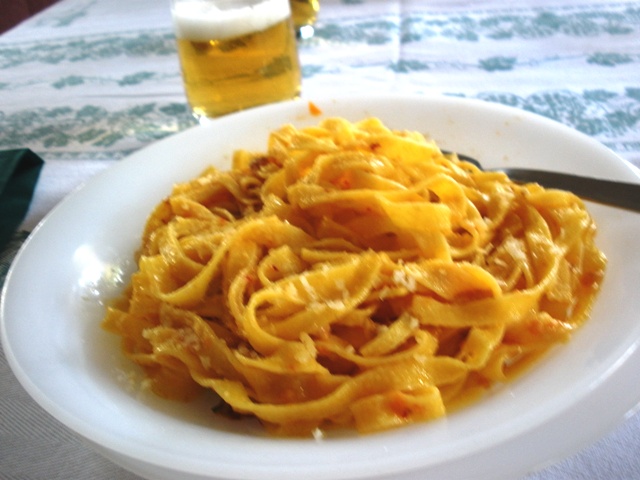 Fresh, simple - and because food - for me - is forever intertwined with the company and circumstances of breaking bread at a table - I will state that this was some of the finest pasta in my life. Made by my Uncle's sister-in-law and shared with his two nephews and my husband. And Luna.

At one point during dinner, they decided to put Luna on the patio. Well, Luna's no dope - there are three entrances into the dining area. She was shooed out one door, walked around the patio and returned via another door within the minute! And stayed. I'm sure she thought she brought us together - she wasn't going to miss the celebratory lunch.

Cook pasta according to package directions - saving 1 cup of the pasta water to moisten.  Heat a small amount of olive oil in a large skillet and brown the pork. Add some salt and pepper if you wish. When pork is browned, add the tomatoes and zucchini. Lower heat and stir until the vegetables soften. Either add the pasta to the skillet or mix it all in a large bowl. Add red pepper flakes according to taste and add pasta water to moisten. Add chopped parsley and combine. Serve - passing some Parmigiano-Reggiano of course.

Are you just sighing thinking, "But - so simple. Why so special?" Because all came together sweetly. Nothing overpowers. All are joined in pitch-perfect harmony. You'll notice no pungency here - no onions or garlic or leeks. All is tender with a wee bit of heat from the red pepper flakes. But you know - Italian recipes are sometimes mere suggestions. Change the meat or eliminate it. Play with other vegetables. What allowed the dish to not be ordinary was the careful mincing of both the meat and vegetables.  That kept the dish delicate and elegant. It's seamless. And it took care. Care adds flavor.

We also had chicken and potatoes baked with rosemary and a lovely pepperonata dish. Followed by sorbet. There were more courses for lunch than I make for dinner!

My giveaway of The Cuisine of Italy with such recipes such as pumpkin tortellini, macaroni timbale and baked pizzoccheri can be found here   If you haven't commented, head on over for a chance to win. The giveaway closes Sunday, 10/5 at midnight with the winner announced Monday morning. And it's just possible that a comment here may win you a visit from the Fairy Hobmother! 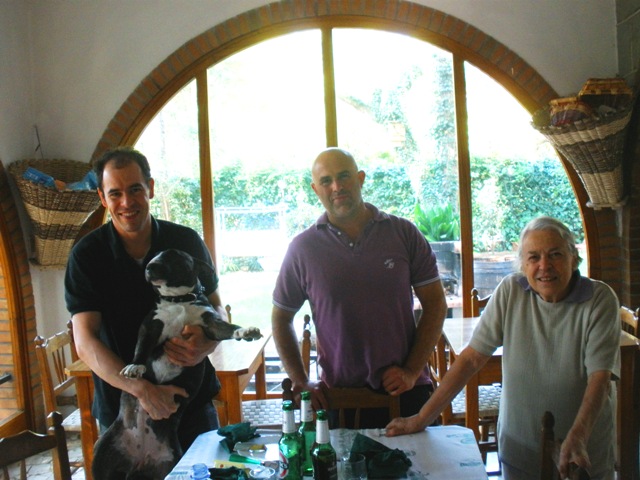 Luna and her beautiful family. I think that dog knew more than she let on!

What a beautiful family. Oh how I miss that... its not the same with everyone gone now... Look at the water! just beautiful.. makes me want to take a plane right over there now.. lucky lady! pasta looks wonderful!

This is a great story. It sounds like you had a wonderful trip and the pasta looks divine.

She did know more than she let on, that's for certain. What a fun and unexpected experience. You must have had an incredible trip Claudia. Love the pictures and the story of Luna.
Sam

Such a beautiful story! That recipe looks delicious. I will come back to get the recipe. I am thinking that I will eliminate the pork and experiment with another meat like turkey or chicken.

This is all the more wondrous because of the serendipity of it all. Coming across Italian relatives merely by accident (or by Luna) is priceless.

It's always fun to come home to good news, presents, and good food.

What a nice looking family, including Luna. Loved the story, the food and happy you have wonderful memories of your awesome trip!

I am enjoying your wonderful trip to Italy. Luna made for a memorable meal and glad you came home to good news.

What a great story! Dogs always know more than they let on...Theresa

I love Luna! What a fantastic tale to weave for us. Thank you. I love the pasta as well, with the little bits of pork and the fresh pasta. Oh, this makes me want to be back in Italy!

I love this story of naming the pasta. Looked a super trip, great company and that dish is perfect for mother-in-law who doesn't like strong flavours that can "come back on her". This is a keeper, thanks! Too funny - you speak food Italian. Last time in Italy I spoke music Italian and, from the wrong century, it certainly pulls some funny faces.

It is all so lovely!

How great is this post?! Wonderful story and that pasta looks delicious!

Luna definitely knew you were all sopposed to meet, and she arranged it in a most delightful way!

I love fresh tagliatelle pasta! The way you had it sounds so good. I also love it with a creamy porcini mushroom sauce.

I have my fingers crossed that I win your cookbook Claudia..and that the fairy Hobmother visits me soon! :)

Glad to hear naughty Pipin was rescued from the roof.

A fabulous pasta and a great story!

Oh, what a fun adventure! And that Luna was one determined pup :) Your pasta sounds fabulous...but I really want to eat it in Italy!

Congrats on the visit from the Fairy Hobmother!!!

Love Luna and the story:)I know Milano-Marrittima very well because I lived in Rimini. Love that side of Italy (and BOLOGNA!!). This pasta looks incredibile!xx

Oh my goodness what a sweet story! It was fate. That Luna is one smart cookie. And that pasta looks wonderful - just say the word zucchini and I'm all over it.

Well, Claudia, you just started a new trend...naming pasta after our furred friends is darling.
This post brought me back to some great moments with my family in Italy as well.
I'm glad you had a chance to connect this way. Beautiful pictures.

Ciao for now and have a great weekend.
Claudia

Lovely pictures, lovely pasta! I broke my arm...so I can't type much but wanted to know that I'm still reading your lovely blog. You make me smile, as always. Blessings and love!

Luna looks happy ;-) I love your pasta luna and the sweet story.

Im glad you were able to connect with your family... you must have a very memorable trip Claudia. I'm so happy for you! and btw, naming that pasta is cute.. hihi.
Im glad to be back here. It's been awhile.
Have a great weekend.
Malou

Great photos and a lovely story. I love that you've called it Pasta Luna!

You make me nostalgic for a real family!