They gave me their hearts...

" A sunrise is a wondrous thing. And it's there every morn, just for the taking."
And so began my weekend of wonder. 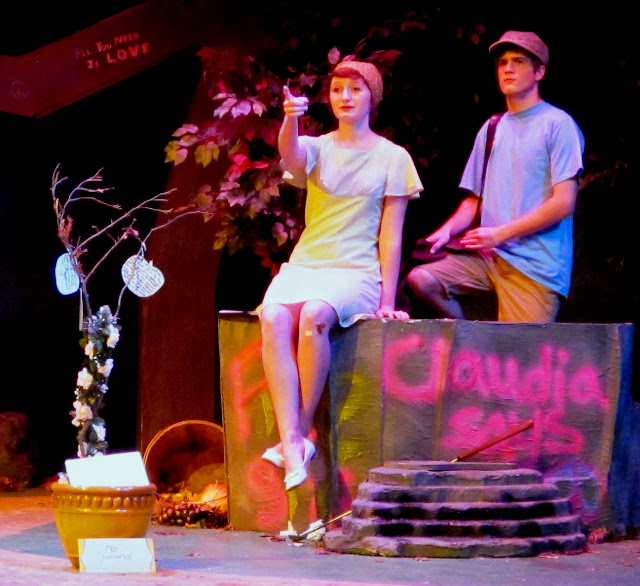 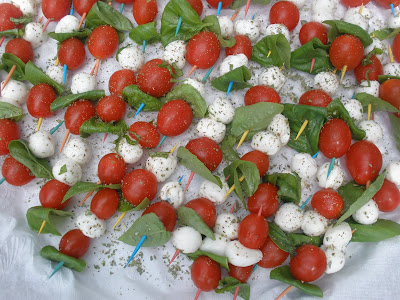 And a lot of sweaty hugs. They put me on their set. 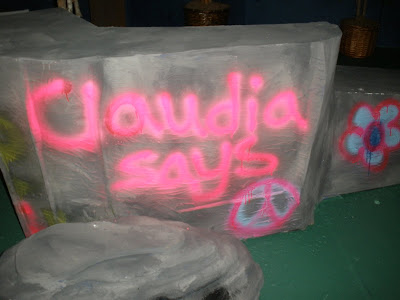 And with such an emotional week, I couldn't cook. I could spread Mostarda (various fruits preserved in a mustard syrup - also delectable with cheeses) on a pork loin and call it a day. Mostarda - sweet and spicy. If you could bottle my cast - they would be Mostarda. Light, color, fruity, a touch of bright,a touch of heat. 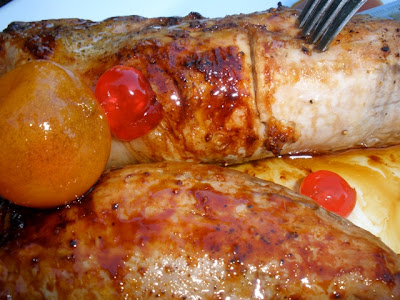 And when the temps soared to over 100 degrees F - I didn't bother with any heated food and ate my way through a loaf of bread spread with fresh ricotta and the same Mostarda. 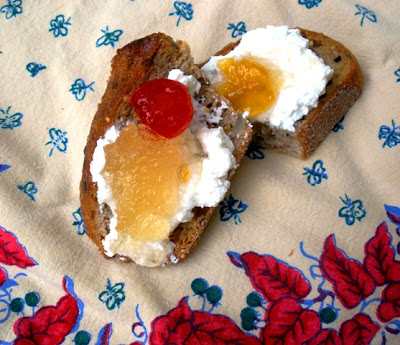 I opened a cookbook last Sunday for inspiration. I cracked open some crab legs and added it to cioppino. 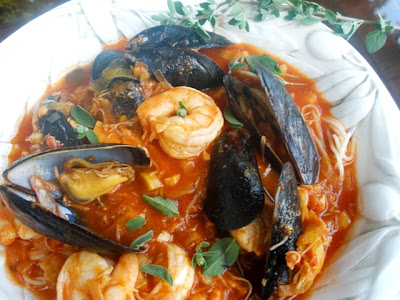 Cioppino from the Rose Pistola Restaurant in San Francisco. I made some substitutions. Nobody minded.

And then it was tech/dress week. The youngest - 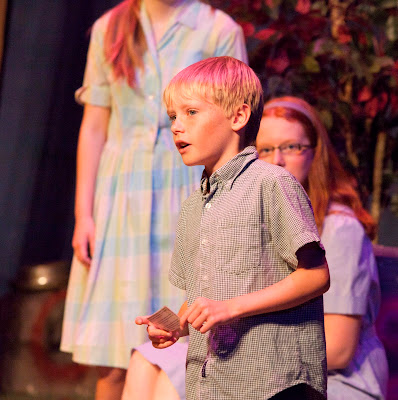 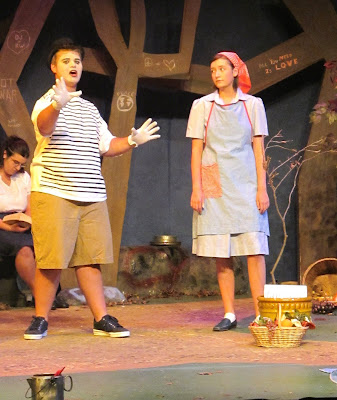 ..came on stage after final dress. My wonderful (and manipulative) scene designer played the Beatles "In My Life" from the lighting booth. And with center stage lit, the students entered one by one and shared a memory they had of me and put gifts - all memories of past plays with me - by a moon tree. (A magical moon tree created by an eccentric girl from Belfast is a cornerstone of the play.) They gave me their hearts. I shall hold them with care.

Look at the tenderness these young students brought to this play.

David places a belonging of his brother Sam - who died in Vietnam-  under the moon tree and finally begins the grieving process. 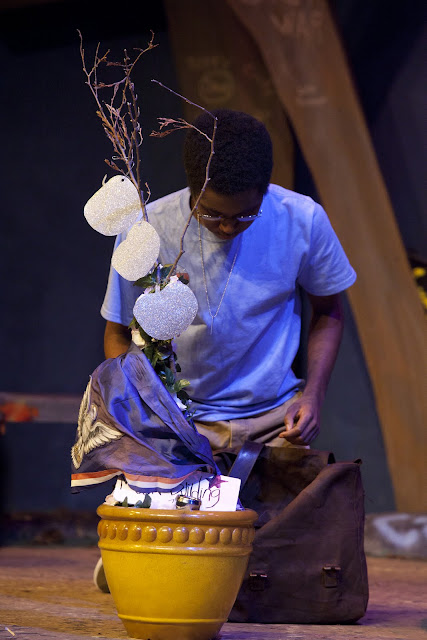 After the moon landing, David gives Madrigal his brother's dog tags - to be buried in the Giant's Causeway in Ireland - a place of giants and faeries from the days of wonder ... a place of eternity. 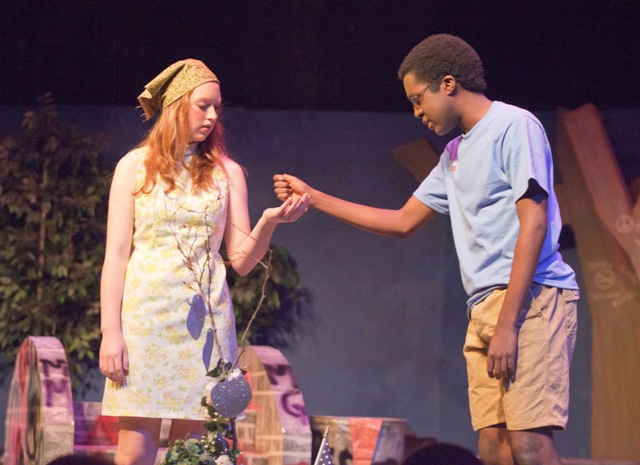 My Madrigals say good-bye after the final show. 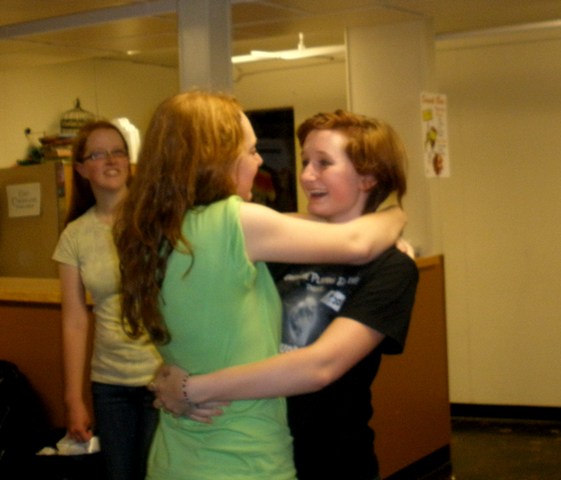 But I won't say good-bye. Not to them. I have plans. Promises to keep.

Email ThisBlogThis!Share to TwitterShare to FacebookShare to Pinterest
Labels: cioppino with crab, mostarda, ricotta and mostarda bruschetta, Under a Midsummer Moon

It sounds like an amazing play, I'm sorry I couldn't see it.

Bakerella just mentioned 3 Seattle sweets stops if you are interested (2 cupcake and one donut)
http://www.bakerella.com/sweet-shops

Thanks Anissa! I will check out the links now.

Mostarda is one of the most under-appreciated things that I know of.

The play: it will go on the road in an easterly direction, yes?

I lived on Mostarda for 3 days - why isn't it everywhere like Nutella?

If the "ping-pong lottery" is good to us, we will take the play to the Minnesota Fringe Festival Summer 2012- with the current two casts.

Which is a bit west of White Bear Lake...

I am inspired (and enchanted) by the pictures of your young cast...and by the idea of Mostarda -- I have read many descriptions but have never tried it myself. Thank you for sharing this part of your life with us. Theresa

What a fine finale, Claudia. You are an inspiration to your young charges, as is evident in your photos. I'm sure you are just beginning on a new path, and they will keep you close in their collective hearts as well. Moon tree for caprese-on-a-stick? Sounds like a fabulous exchange!

I agree with Barbara. You are a fabulous inspiration to your students. Makes me miss the little theater of my college days.

Your caprese cheese and tomato sticks are so pretty on the platter. Stay cool up there. It seems like it's hot all over the world. Surely it's cooler there.
Sam

Oh Claudia - I'd have been crying buckets of joy too. What a wonderful thing you have done with these kids - and for someone so wrapped up in the play, I'd say you did plenty of cooking this week - Love the cioppino especially.

touching post, I caught a quick glimpse of the photo on facebook and had to pop over and read your words...thank you

I don't think this could have went any better Bravo for a wonderful finale, a job well done, received and memories to last a life time.. your blessed as they are to have had the pleasure and honor to make.

Your post could be the base of a play itself...you must have been so touched with their display of affection.

My granddaughter just moved to Tacoma, near Seattle...she loves the Black Bear Yogurt there!

Caprese on a stick, mostarda and cioppino? Oh my!

Your play looks magical and your photos show how beautifully inspired your students were to act out your words. I'm sure you have made lasting impressions on them that will influence them all their lives. I can't think of a better way to spend 20 years than that! Here is to new beginnings, Claudia!

Enjoy Seattle! I've never been there so I'll look forward to your blog posts about what you find there when you get back.

Get a dungeness crab at Pike Place market, some bread from one of the bread shops, and a bottle of wine if you like, and then find a happy bench (check if the wine part is legal). We ate it the first time out of the back of our Datsun camper truck with our hands. It was wonderful, and never pales.

Fish tacos at Flying Fish - one of my personal faves.

Anything berry in season.

Say hi to my son & grandson.

The photos of the play look really amazing, and the food photos look delectable...looks like you were having a ball of a time although it sounded pretty hectic!

I love those photos of the play. An amazing and emotional post.
When the temperature soared to over 100F, I wouldn't even want to eat...LOL
I love the ricotta spread.

Congratulations on another successful play, Claudia. I'm sure you're so proud of them. And that's a perfect treat for them!
Hope you're having a wonderful day.
Kristy

Kudos Claudia. These memories will be ingrained in the minds of these young children. I still remember mine even if it was more than 2 decades ago.
If you are going to Seatle go to Molly's(Ornagette fame) Delancey. That's in my bucket list for Seatle. Have fun!

How beautiful! Thank you for sharing these pictures. Must have been quite moving. And now you've got me looking for Mostrada.

Mostarda is hard to find. I did link it to the online store Sausage Debauchery which is where I got my Mostarda from... and it's a good one.

So bittersweet! You put 20 years of your heart and soul into this - I can't help but think of how many lives you touched. Enjoy your trip!

Dear Claudia, The pictures of the play look enchanting. I am sure that they are pleased and you are a happy. Nice that you incorporated delicious food with the play. Happy for you. Thanks for visiting. Blessings, Catherine xo

This play truly sounds like a labor of love! Everyone must be so sad that the performances are over. By the way The Beatles "In My Life" is one of my favorites songs.

Sending a big hug your way. What a hard, wonderful time this was for you. Thank you for sharing it, and your students, with us.

What a rich life you have Claudia !!! I love your phrase: "if I could bottle my students..." I must absolutely find this mostarda !!!

What a wonderful post. Full of such beautiful moments. Congratulations on working with such amazing kiddos. I know they are BLESSED to know you. And thank you for sharing another inspired eat. I hope you have a great weekend, my friend. I'm looking forward to relaxing and baking! Much love from Austin.

Congratulations on a successful play! All the food you made looks terrific! I adore mostarda, I just made one last week for a recipe development project to go with a foie gras and duck sausage, but then I ate leftovers with just about everything - it's so versatile!

I am all teary eyed now. You have touched their lives forever.

Beautiful, beautiful and beautiful again. The young actors, the opportunity for a new morning for the taking, the dishes...It's all beautiful.

Thanks for sharing.
Velva

So wonderful the actors and wow with the loaf of bread more ricotta and mostarda. Very tempting!

Good to be back and seeing your wonderful blog. I felt your emotion and joy. Thanks for sharing it.
I have been to Portland. Such a beautiful area of the country., but rainy. Hope the trip went well and you had some sunshine.

I would have cried with you! :) Just reading about it is making me cry ... Bravo to you and to these beautiful kids!!

I'm so glad you are appreciated for all that you do!!! Congratulations on the success of your production, Claudia~

Never heard of mostarda before. I know I'd especially love it with cheese and bread. Sounds heavenly.

Wow Claudia you must be so proud, looks like it was one fantastic play! I never had Mostarda, but sure look tempting! Have a wonderful week dear!

How did you hold back the tears, I would have been a mess. I'm sure you affected them as much as they affected you. Have fun on your vacation, eat lots of good food for me.
-Gina-

Mmm - those little caprese sticks look absolutely DELICIOUS, especially for a nice outdoor picnic while we can still enjoy the Summer. They look pretty easy, too - I think I'll give them a try! Thanks :)

Claudia, thank you so much for sharing such a sweet post...yummie food as well.
Enjoy your time in Seattle and see when you are back :-)

Just dropping by to say hello and hope that you are having a blessed summer. Thank you for the visit. I always look forward to them. Catherine xo

Claudia, Looks like a great play, I am sure it is a great play. The recipes are wonderful!

awww Claudia! That must be so difficult to do.... you have surely inspired so many of those beautiful children over the years. Another door will open and you will have just as much love to give! -
Megan

It must be tiring for you to do so many things at one go but it is all worth it! Thanks for sharing those precious moment with us. You are truly an inspiration not only to the kids with to all of us!

I teared up just reading this post Claudia. I can imagine how close you've gotten to your talented young actors and how proud you are of them. You are truly an inspiration!

What a wonderful amazing events and how wonderful to see how it was a self fulling ring - you enriched their lives, they yours. What a treat!