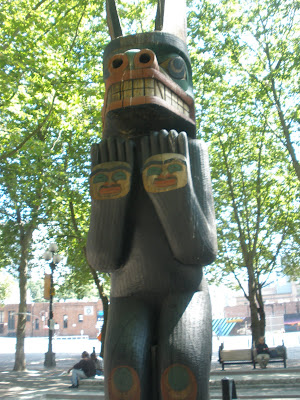 Travelling. You find perspective. You remember not to be wrapped up in your own world. There are lots of worlds out there. Seattle is rich with worlds. Rich with totem poles. Rich in brick and stone because of the 1889 fire that swept through Seattle leaving it in ashes. Rich in times of the Klondike gold rush (which young Nordstrom of Nordstrom's department store took part in - enabling him to open up a little shoe shop...). Pioneer Park's totem pole was added in 1890 - when a group of drunken city founders stole it from a Tingit Native American village. An arsonist destroyed it in 1938 so the current city council sent $5,000 to pay the Tingits to carve a replacement. The legend goes that the check was cashed and written on it was:

"Thanks for finally paying for the first one. However a new pole will cost $5,000."

And the city is rich in art. From the astounding Olympic Sculpture Park you will find art that soars, blends and ignites. Below is The Eagle by Alexander Calder. He is noted for blending into the landscape that is part pragmatism and part poetry. I was happily surprised that his sculpture is also in the Minneapolis Sculpture Garden. (Lesson: Know thy own city!) 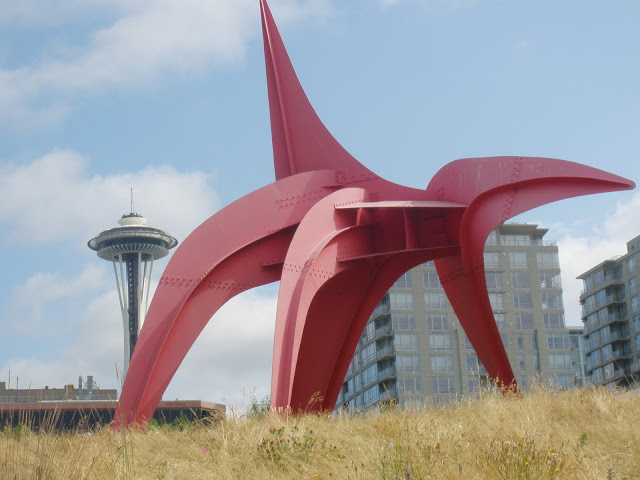 And the aptly named Seattle Cloud Cover by Teresita Fernandez. Through saturated color photographs sandwiched in glass, you can view Seattle's ever changing sky. 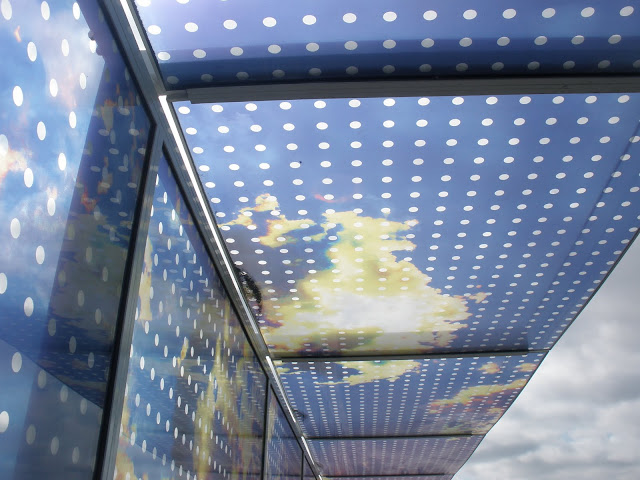 Sunny and cloud blues switch to a red-purple rain. 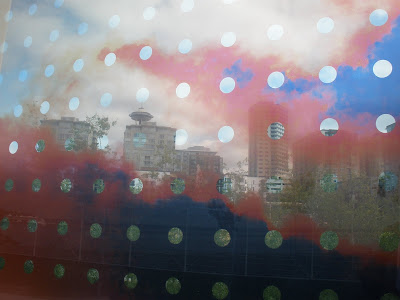 Bunyon's Chess by Mark di Suvero describes his sculpture as "Unity and joy. That's why I like to suspend elements from the beams of my works, so they can interact with the winds and other forces." Unity and joy - it's actually a beautiful wish if you think about it. 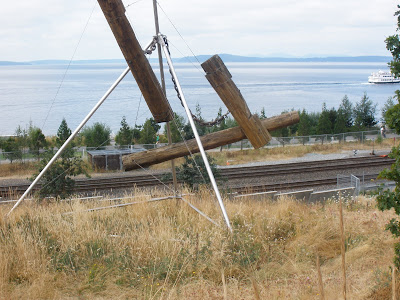 When you are a city walker, you can argue with yourself that a few extra calories won't hurt. And so I found my way to Mario Batali's parents tiny Salumi. And feasted on the most delicately cured meats that I have had since leaving New York many decades ago.

"Its about Tuscan Finocchiona salami, studded with fennel seeds, and the best spicy sopressata I have ever tasted- complex, slightly smoky, and a vivid red.  Hold up a piece of any one of Batali's salamis and you'll see a carnal kaleidoscope, with bits of rosy hues and solid or clear whites, a slice of careful handiwork." 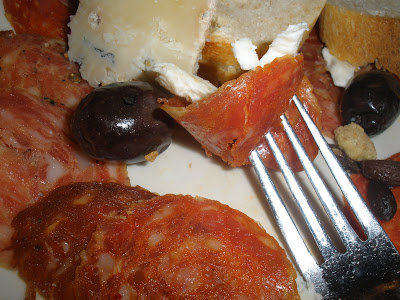 And if that wasn't treat-enough, I later managed to to squeeze in some Salty-caramel ice cream from Molly Moons. (after spending way to much at the Elliott Bay Book Company. 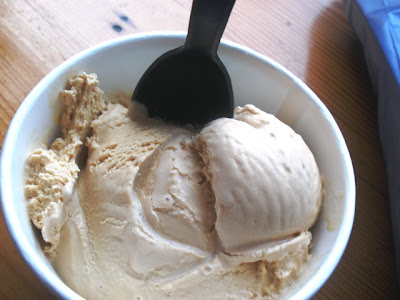 And came home deciding to integrate Seattle's crab with MN corn and the gulf shrimp that drops by once a month. My niece introduced the family to Frogmore Stew this summer. I took it a step further with crab and andouille sausage and and cooked enough for 20 people even though I was serving four. Have you ever done that? It's also called Hobo Stew, Shrimp Boil, Fish Boil.... I'm sure you've seen it around. t's more southern and western American than Italian. But if I was going to tie it into Italian I would say - it's all in-season. All fresh. Local? Nope. No shellfish on the Minnesota tundra. But in-season, summer-perfect? Definitely. 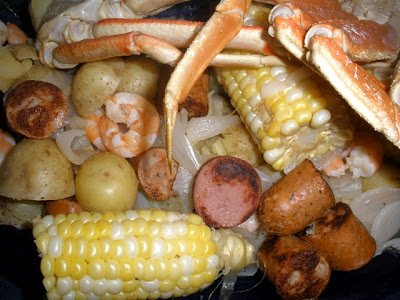 There's no recipe. Bring 3-4 gallons of water with 2 bottles of dark beer to boil. Add a bunch of Old Bay Seasoning. 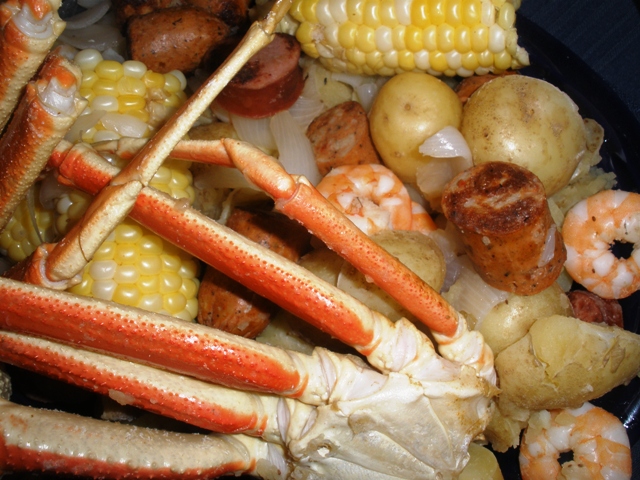 I browned the sausages first for color and texture. You don't need to do that. And then added them in the boiling pots according to cook times. The onions and potatoes went first. Both were small and needed about 8-10 minutes of boiling. Then I added the sausages - which were pre-cooked so just need to spice up the stew a bit. Then the crab legs - which needed about four minutes to heat up. The shrimp needed about two minutes. And fresh MN sweet corn? I never let that go longer than a minute. Don't want to cook the sugar out of them! 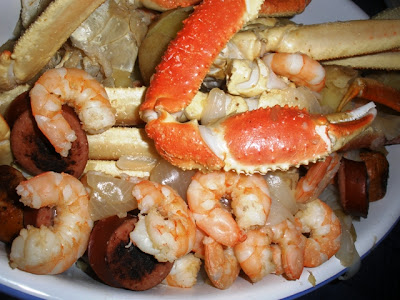 Traditionally, this is served outside on newspaper or plain paper and squirted with butter. And you eat with your hands. Since I am not on a beach - I opted for the traditional dinner plates and forks.  I did have melted butter for dipping. None of us needed it.

This is a grand end-of-summer soiree. Forget the hamburgers on the grill for Labor Day and celebrate the harvest with a good dose of this stew. It's summer, it's fresh, it's easy and celebratory. Look at the colors, imagine the textures. The brine of the shellfish, the creamy potatoes, small bursts of heat from the sausages, the sweet of the corn. It continues summer - ripe with possibilities. The season may be waning but the summer-sweetness continues.

One thing I realized as I returned home from Seattle, is that I forget what is in my own backyard and that it is possible to seek beauty and refuge close to home.. A bike ride through Lake Nokomis in Minneapolis reminded me of the riches right here in Minnesota. Of course, I got lost following the Minnehaha Creek - but that's another post. Some noted playwright noted that, "All's well that ends well" and so ends my crabby few weeks that began in Seattle and ended in White Bear Lake, MN. 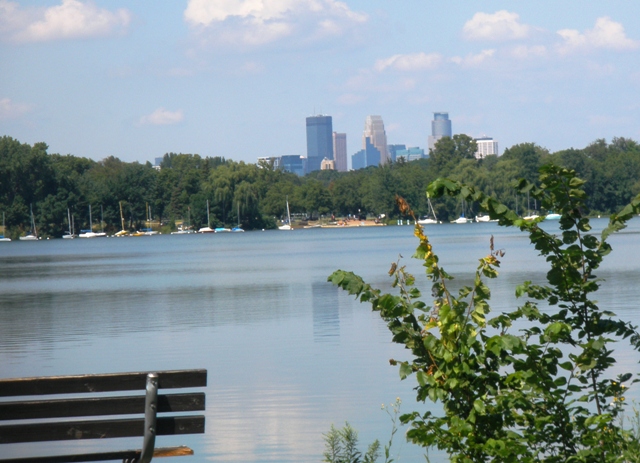 More on Seattle and a mighty fine recipe for Goat Cheese Timbales wrapped in prosciutto can be found here.

It's definitely called a shrimp boil down here and it's one of my favorite things in the world. We just throw down newspapers and go at it. Yum, yours looks fantastic.

Claudia, your seafood boil looked so good I would have quickly dug into it with my fingers despite not being served on the beach! It contained my favorite seafood...yum, yum!

Seattle looked beautiful in your photos (and no rain!) I can't wait to see that city one day.

I always think of Mario Batali as a NYC guy. Funny to think of his parents on the West Coast.

That stew, or boil, sounds so!good!

I always love to visit here. Thanks for sharing your world.

It's always great to travel for inspiration, Claudia, which seems to find you wherever you go. And, oh, does that salty-caramel ice cream look good!

Mmmm - salted caramel ice cream sounded SO strange to me, until I actually tried it! Now I can't get enough.

Oh, your fish boil sounds amazing! I would have cooked for 20, too...just to have days of those fabulous leftovers. Your photos make we want to hop on a plane to Seattle...such a fun city~

Yummie, I love your seafood boil...would love to get my hand in it. Nice pictures!
Hope you are having a wonderful week Claudia :-)

They call it 'lowcountry boil' down here in SC....love the travel photos, Claudia! Hey I'm following you on networked facebook blogs now. Also, yes I posted a comment on FB, I did feel the tremor here. Such an odd feeling, sort of like inner-ear dizziness for a few seconds and then it's over. Thanks for your kind concern!

I never had this, but what a feast! It would be perfect for Labor day - something different. Enjoying all your pictures and stories. Wish I had some of that ice cream.

You found some neat spots in Seattle! And the seafood stew sounds super delicious!

Really beautiful pictures, stunning and interesting Sculptures..and who wouldn't have a little place for that Salty caramel ice cream..yum!:))

Beautiful pictures. Love seattle's changing sky..the sunny cloud one is just amazing!
Can't take my eyes off from those crabs ;-)) Now I am ready for some ice treat!

We have seafood fest every year here in Florida its in a place called Grant. They have the best seafood and tons of it. After looking at this and crab btw is my favorite, they close the doors when they see me coming for all you can eat lol!!! This is my kind of place you sure know how to make me want to fly to Seattle in a hurry... great post nice to see you have a GRAND time... you deserve it after all the theater work and accomplishments... nice job with the pictures too!

You spent your time in Seattle well. Salumi is not to be missed. It is a really interesting city and your picture have captured it well. I love your fish boil. I'm not sure I can afford it but I love it :-). Have a great day. Blessings...Mary

I love these photos! And hello....salted caramel ice cream? Uh...YES!

Now you have convinced me that Seattle is a city I must visit! Love a city with a respect for artists, including culinary ones and a body of water nearby! ( I will just have to try to make it there when it is not the rainy season!)

As I've been slowly doing my rounds...I can't help but realize what a colorful, interesting bunch we foodies are.
Claudia, this post is exceptional...especially since most of my friends always crab about Seattle when they go for business. They don't mention much other than how rainy it was. I'll be sending them your post...well done.

It's nice to be back for my visits ;o)

You've made me see Seattle through new eyes - and new places and sculptures. But I have to confess that food - the salumi, the ice cream - captured me too.

What a great tour...that is hilarious about the check for the pole!
And your stew looks fantastic...even on a plate :)

Your frogmore stew looks wonderful...as do the other treats you had in Seattle~