It was a simple weekend morning that belied the busyness of the weekdays. Husband-person is settled in an armchair with paper. I'm wrapped in a cozy, with coffee on the left, purring cat in lap and balancing May's Bon Appetit (devoted to Italy). And then it happened. I was hypnotized. 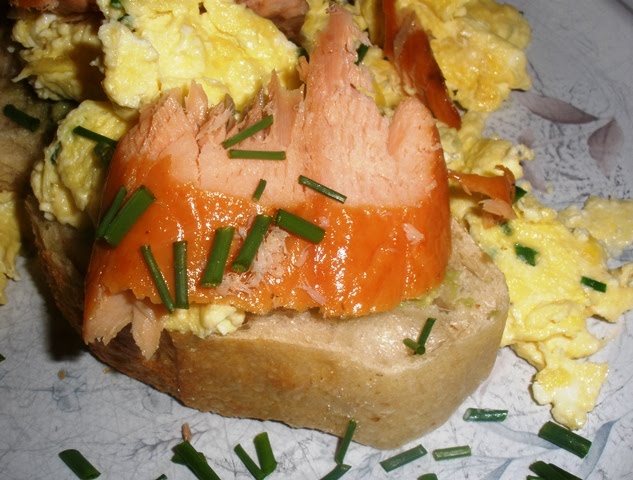 Eggs on toast. How basic is that? True it has smoked salmon, mashed avocado with lime, fresh chives and did I mention that you stir in a dollop of creme fraiche? In a trance, I picked up my car keys and left telling husband-person, "Don't eat anything. I will return."

And I did. With sourdough bread and an avocado to finish the ingredient list. Is it a recipe? Not really - it's just what the Italians savor - fresh ingredients. Separately they delight. Together they bewitch.

Ingredients - for 2
sourdough bread, sliced, toasted in the oven
4 eggs (or 2 eggs and 6 egg whites) whisked with a healthy dollop of creme fraiche (or butter or sour cream)
lime
1/2 avocado - mashed with lime juice - to taste
2 slices of smoked salmon (or lox)
fresh chives - about 6

Prep
Snip your chives, toast your bread, soft-scramble your eggs - add in 1/2 your chives towards the end of the scrambling process and scatter the rest on the dish when done. Smear mashed avocado on toast. Top with scrambled eggs, put a slice of smoked salmon on top, scatter remaining chives and find bliss. 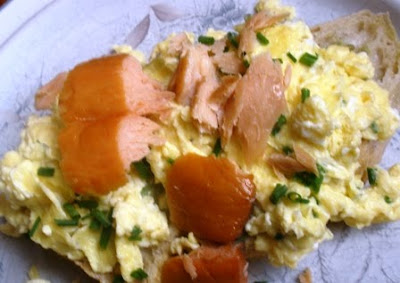 During the last two weeks, I found myself directing a touring production of two casts of Hansel and Gretel as well as a lovely food-centric play Food For Thought, editing Under a Midsummer Moon (the play I deleted is a phoenix) and researching my new play Searching for Uncle Otto. It's tricky - moving from the Gingerbread House to July 1969's Central Park in New York City with side trips to 1930's Russia. It is no wonder I turn to toast for sustenance. I am toast. Sometimes sweetly-spiced, often nutty, alternately brittle and pliable.

As I walked through life as a piece of toast, I felt myself smitten by Smitten Kitchen's Leek toasts with blue cheese. Who tweaked it from Molly Wizenberg's leek confit. It must be Murphy's Law that when you are "toast," you are attracted to toast. 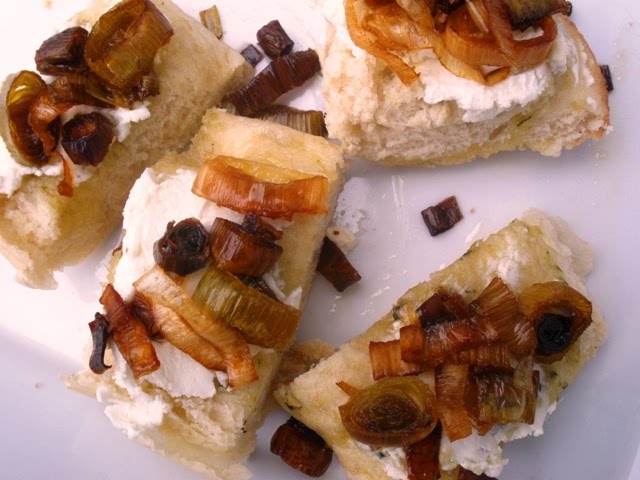 My version uses goat cheese. And it's simply your favorite bread - lightly toasted. Smeared with goat cheese and topped with caramelized or sauteed leeks. Find the recipe here. Toast can be mesmerizing. 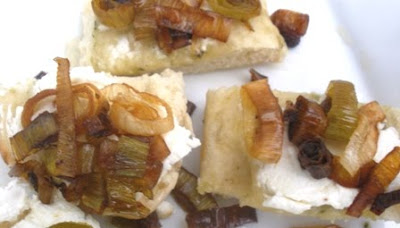 The first performance of Hansel and Gretel was at a center for families with challenges. The play's interactive and the audience (whew) laughed where we hoped they would and participated with respect and gusto. When the father in the play announced, "We will never be hungry again!" they clapped. A poignant moment for the cast and crew.

I may be toast. But I have the means to eat. I watch the tulips close at dusk. 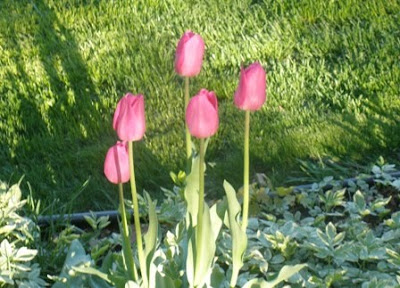 And the ducks sleep in our grasses. 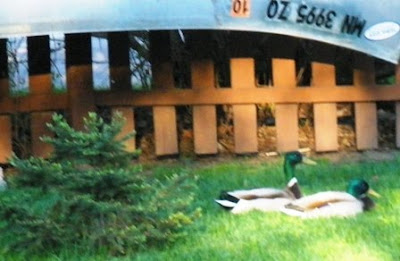 And give gratitude for my two weeks of toast. I am off to Chicago for some R&R - which may be an anomaly or just what the doctor ordered. The computer remains at home. Have a grand week. As I toast my 25th anniversary, you can toast some bread.

Have a grand trip and eat well. Leave the toast to those of us who stay at home.

Have a restful wonderful well deserved trip and happy anniversary!

Happy Anniversary! Enjoy your break. You are quite amazing, you make simple toast seem like something fit for royalty :)

Happy Anniversary! I hope you have a wonderful and relaxing vacation :)

Happy anniversary, and hope you enjoy your R&R. Your toasts look delicious!

Happy Anniversary! I hope you have a wonderful time on your trip.

Have fun in Chicago Claudia. Love all those toasts, but your writing really gets me.

A toast to you on your anniversary, Claudia. I could live on toast, too, and it's not so bad to be a little crispy now and then!

Claudia, we just returned from a weekend in Chicago to celebrate our 25th anniversary! Have a wonderful time! I am also bewitched by your toasts :)

art is in the kitchen said...

Your toasts are fantastic Claudia! Happy 25th anniversary to you and wish you a grand week too! Cheers!!!

You may be toast, but words are your butter! Happy anniversary...I am toasting you now (with a beer, not warm bread). Have a great trip. Theresa

Happy 25th anniversary Claudia! Enjoy Chicago --I hope you get to do some of things I suggested and that the weather will be nice there this weekend.

I love both versions of toast! My husband's favorite snack is toast with a smear of ricotta on top!

Claudia, thanks for your comment, you are so sweet :) I love these toasts, especially the salmon one. The tulips and the duck are absolutely pleasing to see.

Have a great weekend.

Both toasts sound scrumptious for sure! Happy anniversary! Have a wonderful time on your trip!

Happy Anniversary! Enjoy your deserved break and have fun! Lot of fun :)

Happy happy Anniversary!
The toast looks so mom styled and great! I simple love it.
Enjoy your trip!
Angie

What a fabulous post, Claudia. Loved the look of that smoked salmon - as a Scot I appreciate a good one and that photo looked just fab. Love your other concotions. Great news on the plays/productions, too. We'll drink a toast to your 25th anniversary and enjoy a well deserved break.

I eat similar breakfasts, and I must admit, I, too, am often quite hypnotized!

Happy Anniversary! I saw the eggs and toast recipe, but we're not salmon fans so I didn't mark it. You're making me rethink that though. :)

While in Chicago, face west and wave to my parents, ok? Thanks!

Have fun on your trip Chicago is my neighbor's favorite city (she is a native) and enjoy toast and bubbly !

Toast is so comforting. When all is chaos in my house, peanut butter toast takes care of anyone who is hungry. I am leaning a bit toward that goat cheese caramelized onion creation, though. That would really be my style.

Happy Anniversary! Have a wonderful trip! I am suddenly craving toast... which idea to try first...?

I hope that you are getting a lot of rest. It certainly sounds like you need and deserve it!

I want that smoked salmon toast!!

Happy Anniversary! The windy city is the bestest! :) I am about an hour drive from there.

Happy Anniversary! As I read through your post I was remembering all of your snow days. So glad spring has sprung over your way and you are able to once again make a quick run to the market. :)

Happy Anniversary, Claudia. I hope you enjoy your break. Your "toast" looks wonderful and has made me hungry. I hope you have a great day. Blessings...Mary

First of all Happy Anniversary, secondly I love your we attract what we are line. Relax, enjoy and make sure and eat more beautiful food.
-Gina-

Dear Claudia, Have a Happy and Blessed Anniversary. Enjoy your r&r. We will miss your kind visits for the week, but look forward to your return. Blessings, Catherine

Ah my dear friend! Happy Anniversary! I love making meals like this...simple, fresh ingredients do wonders! Thank you for sharing with me tonight...I'm sorry I've been gone so long! Your blog continues to bring a smile to my face. I hope you have a blessed Sunday!

Happy Anniversary!! Take a break..you have left us in good company...toast? ;D

Happy Anniversary! I hope you have a wonderful time in Chicago.

I love eggs on toast and I agree it has the power to change the day for the better.

Happy Anniversary! I hope you are having a wonderful time!

Happy Anniversary :) Bread is my favorite food group, I will have to get the magazine this month!!

Claudia, Happy Anniversary! The toasts look fabulous...simple and yet so delicious. Cute pictures of the tulips and ducks :-) Have a wonderful week!

Happy Anniversary Claudia and hope you are enjoying yourself right now as I typed these words:D I love your tulips and your toasts!

Don't try the noodles cold! You've been warned :-). Have a great day. Blessings...Mary

Your post has inspired me to toast bread! Toast bread with a great spread, and drink wine with my toast too.

Enjoy your R&R in Chicago-what a great city.

Nom, Nom, Nom! Totally love the Eggs & Salmon, a brilliant brunch, I am inspired to do some blogs about breakfast food, no one seems to do it. Thanks for the inspiration. Happy Anna-versary! :)

Claudia, sounds like your anniversary was full of love and good times! As far as the toast goes, I agree with your statement about Italians and simplicity: just give me some bread, toasted or not, and slap on a piece of cheese or salami/prosciutto and one is in heaven!