"Mercury must be in retrograde." My friend Terry would pronounce this after an audition that did not go well or an evening of waitressing that yielded few decent tips. Yesterday afternoon, as we gathered for our February Cover Girl dinner, there were murmurs that indeed the planets had not been aligned properly during the last week. Everyone was coping with significant stresses and the afternoon began quietly.

My sister arrived with the Sunday NY Times and a jar of chocolates. The chocolates were warmly welcomed and devoured. Diane and I began our prep. The menu was to be:

Dessert would be: a do-it-yourself-crepe-bar

Sparkling cider was chilling, a Shiraz was uncorked and water bottles and sodas could be found all over the kitchen.

We turned on a Fray CD and began the process of chopping for the chimichurri sauce. Matthew moseyed downstairs to watch a movie. Kirsten and Devon went into the den to become Guitar Heroes. Paul started the taxes. Diane and I chopped. The music was low-key as was the afternoon. When the chopping was done, the beans par-boiled, the potatoes dressed for the oven and the steak was rubbed, we found it was too early to make the crepes and we had a wee bit of time on our hands. 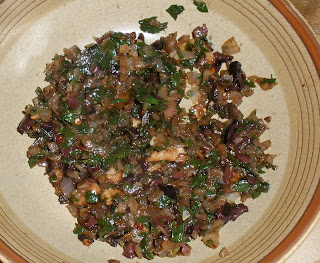 The chimichurra sauce looked good enough to eat now - simply spread on a slice of bread and enjoy. Diane and I were longing for an escape out of the winter doldrums. Coldplay went into the CD player. Viva la Vida came one and the dancing began. We danced as we cut the Asiago cheese and as the salame came out. We dipped into the chocolate jar. I forgot that my planned appetizer was hummus with crackers and vegetables. People starting meandering to the kitchen, taking a look at the "Dancing Schmidt Sisters," grabbing some cheese and chocolate and running for their lives. Even the kitten left. After three go-rounds with the same song, we decided to make crepes. But nobody could properly babysit the quick-cooking crepes with Coldplay singing to us. In went The Little Shop of Horrors CD- a show that evokes grand memories from our NY days.

The pan was heated, the crepe batter came out and we took turns making the crepes as we sang along (loudly and undoubtedly off-key) with the soundtrack. Some crepes were a little browner than usual as we tried to hit a high note but all in all there was only one mangled crepe out of fourteen. We dutifully ate our mistake and continued to sing. Unbeknownst to us, the appetizers had disappeared. We didn't notice the furtive comings and goings in the kitchen. Food was swiped. Nobody dared to come near us!

As the CD neared to an end, the potatoes went into the oven, the beans were doused with cumin seed and garlic; the steaks were seared and put in the oven. The singing quieted down. Kirsten dared to approach us and we told stories of seeing Little Shop of Horrors in preview at the WPA Theatre. A friend of ours was "the plant" and we later went out with half of the cast and the composer and lyricist. It was a magical night. Recalling that evening gave us a lighter move to our steps.

And then the steaks came out, the chimichurri sauce was placed atop and the meal began. 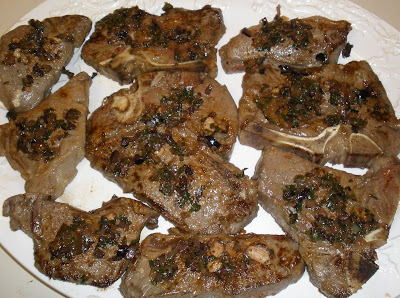 *I inadvertently threw in the crushed garlic also. Didn't hurt it all. Adding extra garlic never seems to hurt!

This can be done up to two hours ahead of time. The mixture can sit at room temperature.

Rub steaks with 1 tbs oil and pressed garlic. (Yes, I had to press more garlic.) Sprinkle both sides of the steaks with the paprika, coarse salt and cayenne pepper and a generous amount of black pepper. Let stand at room temperature for at least 30 minutes or up to two hours. The steaks were so tender they could be cut with a butter knife. My husband swooned (and he is not a swooner). Things quieted down as we moved on to the serious business of eating. Happy sounds wafted over the table. A few minutes later, conversation with words began. The wonders of creme fraiche on roasted potatoes was explained to Devon. ("No, it is not yoghurt." "No, it is not sour cream.") Conversation switched from the story of Uncle Phil and the Mafia (no, our family did not partake) to Grandpa Haas's experience with the St. Paul gangsters in the 1930's. Having been at a loss to follow four conversations simultaneously during our Thanksgiving dinner, Devon was pleased that he had learned to listen to multiple conversations at the same time and appropriately interrupt! This was a break-through!
By the time the crepe bar was set-up, Matthew and Kirsten were in happy tears recounting the story of "Mom and the time she said a bad word loudly, outside - when she thought her children were throwing the Christmas tree at her." That tale seems to have surpassed the tale of the "time-Mom-tried-to-serve-the-tiramisu-and-mangled-it-beyond-recognition."
Dinners can provide their own enchantment. In the midst of a Minnesota winter, a cover recipe can be the perfect antiodote to whatever ails you. I have no idea what we will be cooking in March - have not seen the March Tastes of Italia or Bon Appetit. I only know I am looking forward to it.