The Secret Life of a Broth-o-holic

I confess - I am a broth-o-holic. I can have noodles in broth (and do) at 8 a.m. I swill my broth with the best of them. I would like to say it is always homemade-simmering-30-hour-drop-dead-grandma's broth - but I will happily open a can, cook some noodles - spaghetti, penne, tortellini - whatever is in the house and throw it together. And top all with shredded Parmesan. When it calls to me, I will do this on a summer day when it is 85 degrees out and only 10 a.m. in the morning. My daughter will come downstairs, seeing me sweating with my soup at the table and shake her head in dismay at the mad woman who is supposedly her mother.

My descent into broth-holism started innocently enough. I was a lucky, poverty-stricken student studying in Austria. The school took us on a whirlwind tour of Italy. What's not to like? But by the time we got to Rome and had seen 112 churches and the bones of as many saints, we were eager to have some time on our own. And we did - in Rome.

Being poverty-stricken, (to figure out my age - let it be known I did do Europe on $5/day and never camped outside ... well, there was the one time in the Paris train station over night... but that was inside) ... back to being poor - on our own in Rome there was no restaurant we could afford. We went into the train station - probably because it was free and there was a cheap (really cheap) menu of soups and pastas. I ordered tortellini in brodo.

And I was transported in the train station. Without getting on a train. Nothing in Penn Station in NYC ever tasted like this! (Although they used to have really good bagels.) I would forever be hooked on noodles in broth.

Fast forward 6 years and I am a poor actress (notice the common theme?) in Greenwich Village. I was fond of three trattorias that were in my neighborhood. Locally owned, they had some outstanding Italian food and no one seemed to know about them except for us lucky locals. Their tortellini in brodo with swirls of spinach and arugula was my favorite meal. They knew me and were pleased when I ordered something different. (Signorina, the veal! the pasta! the chicken!) But I was an addict and nothing would do but a quick fix of their soup.

These days, I keep homemade stock in the freezer during the cooler months. If it is 85 degrees out and I have a craving for noodles and broth, I will open a commercial can of broth (if my cravings are not intense I will spend 30 minutes enhancing it with some roasted vegetables), add cooked noodles and top with parmesan. It is now one of my daughter's favorite meals - we manage a vegetable in there. And in the winter, I will use beef broth, pepper it, reduce it, sometimes add wine and swirl a little butter in it and serve the rich broth with ravioli. Which is what I did last night. 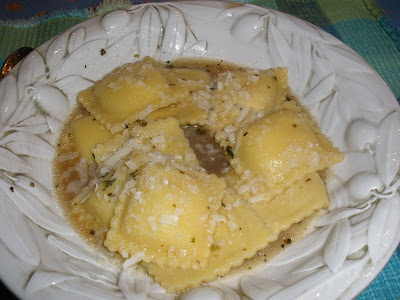 And I'm back in a Rome train station which was a really nice place to be.

Email ThisBlogThis!Share to TwitterShare to FacebookShare to Pinterest
Labels: ravioli in broth; soup

This sounds terrific and looks wonderful. Id really love to try this. I am so glad the cookies were enjoyed.

Thanks, Donna. Developed when the kids were in high school so needed to be easy, fast, tasty and capable of being served at different intervals!

Okay now this I love! I also keep broth in the freezer :) Great idea!

And as MN returns to winter today, the broth is coming out of my freezer....