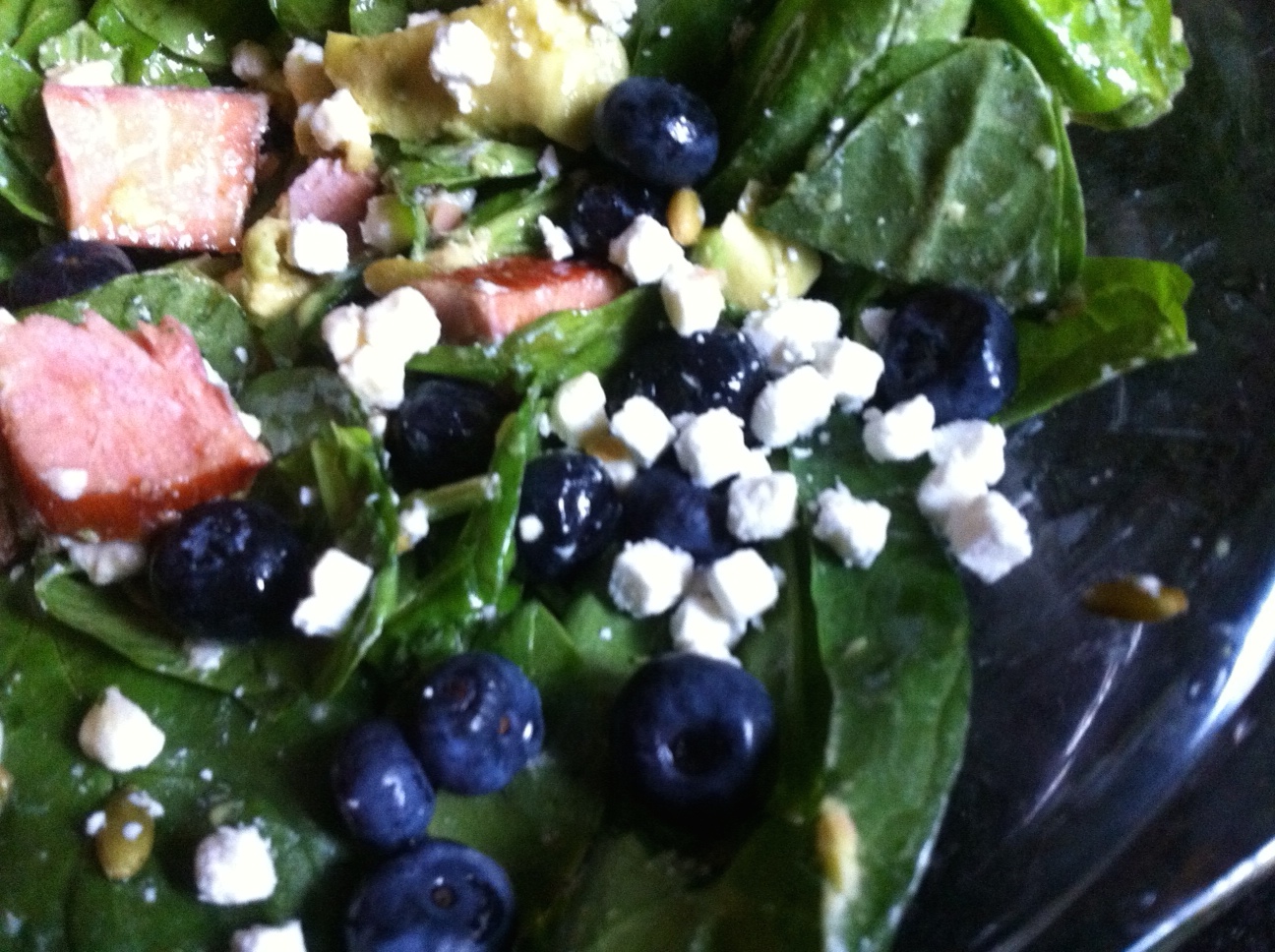 And so it came to pass that after six months of low-carb, healthy eating (including trip to Colorado, Wyoming, Montana, including trip to the Covered Bridge of Madison County), Claudia thought we could introduce carbs once a week into our dinner. Husband-who-is-allergic-to-dieting found that he now fits into his absolutely favorite suit he bought in his 40's - was dismayed. He's not done! So I guess I'm not either. (Although I may sneak out for a trip to local once cream store for a cone - what flavor?)

So I bring you a healthy summer dinner and then I dynamite the entire process with this exquisite sour cherry pie. Balance is key, correct?

I found the salad on Pinterest and even carb-deprived Claudia thought it sounded good. It's from a blog called Gimme Some Oven and it couldn't be simpler. I bought the smoked salmon (about 8 ounces) and tossed it with spinach, blueberries, goat cheese, pumpkin seeds, red onion and an avocado.

The blog suggested blue cheese and walnuts which would be good but weren't in my kitchen! 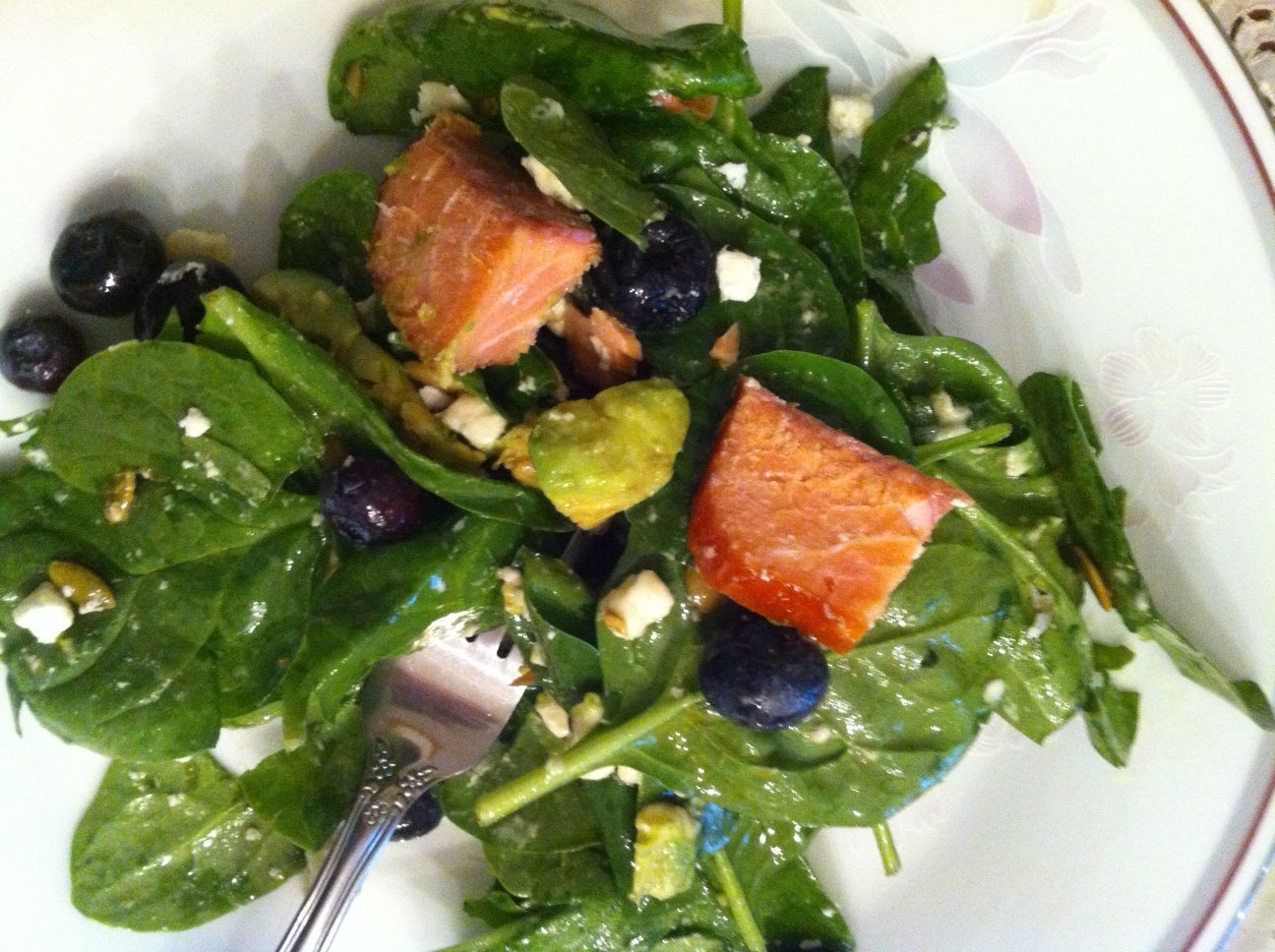 Allergic-to-dieting-Paul loved it and he is of the Midwest-farm-mindset that dinner should always include something warm or else it's lunch. Of course, he also used to think dinner must have a carb - but I guess I cured him of that. Be careful what you wish for.... 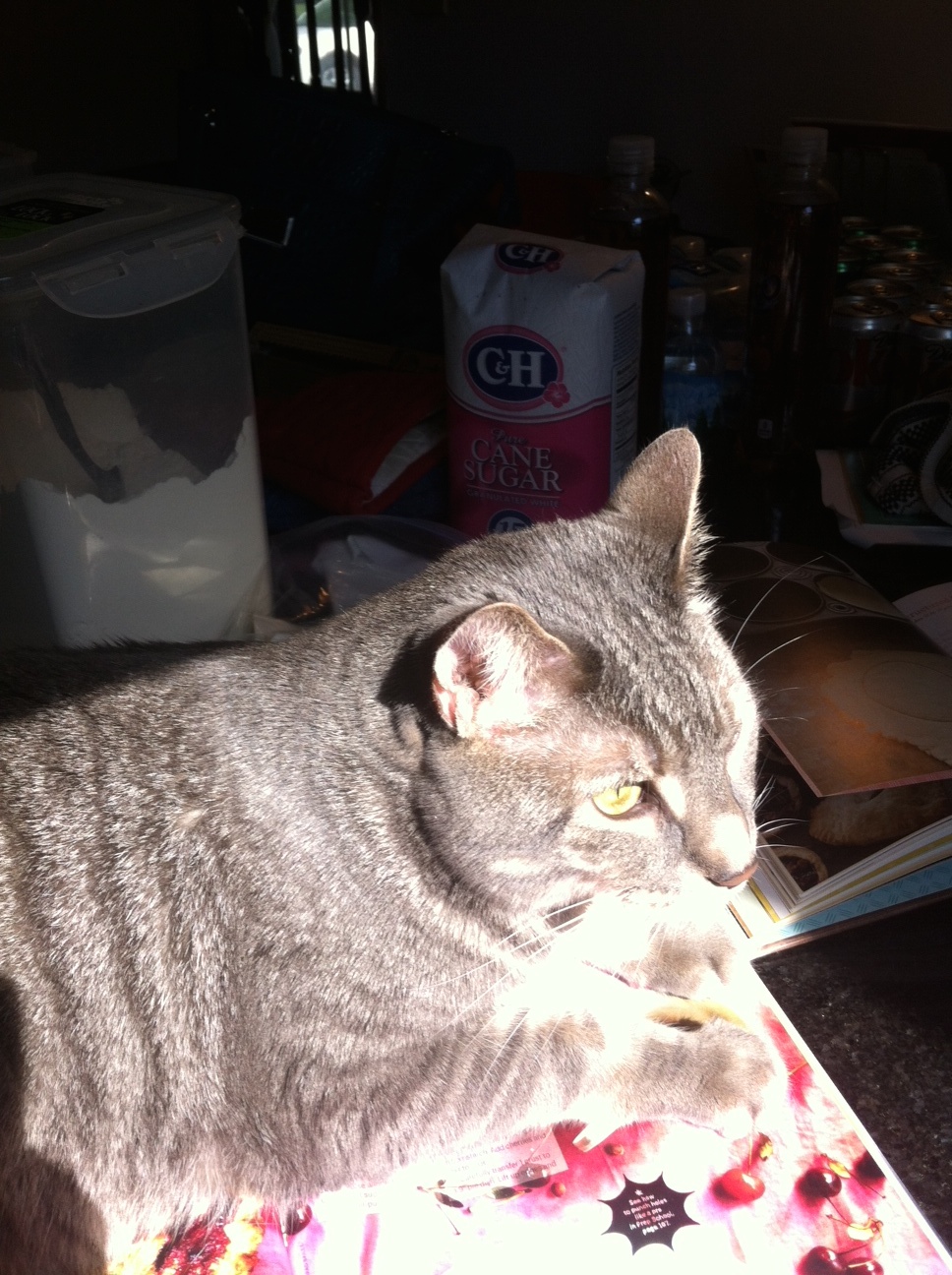 In the five years I've had Pippin, he has never climbed counters, never helped me bake. Never. Ever. In fact, when Luce did ALL those things, Pip would tattle on him. He'd come get me. Now he helps me bake. By sitting on the recipe. You have to give him credit for filling in the space.

Sour cherries (amarene cherries) are very popular in Italy - some are preserved in wines and other hard liquors. A lot of amarene cherries go into jams which are later used as condiments for meats or a jam crostada. Recipes and more information can be found here.

In Des Moines, there were just-picked sour cherries at their expansive Farmer's Market - downtown - complete with farm breakfasts (all carbs) and entertainment - such as the Mimes. That talked. Which made me wonder if they flunked out of Mime School.

When I saw the cover recipe from Bon Appetit - showing a sour cherry pie in all it's glory (bonus for the addition of almond flour in the crust), I knew that some tasty were carbs were in my future. 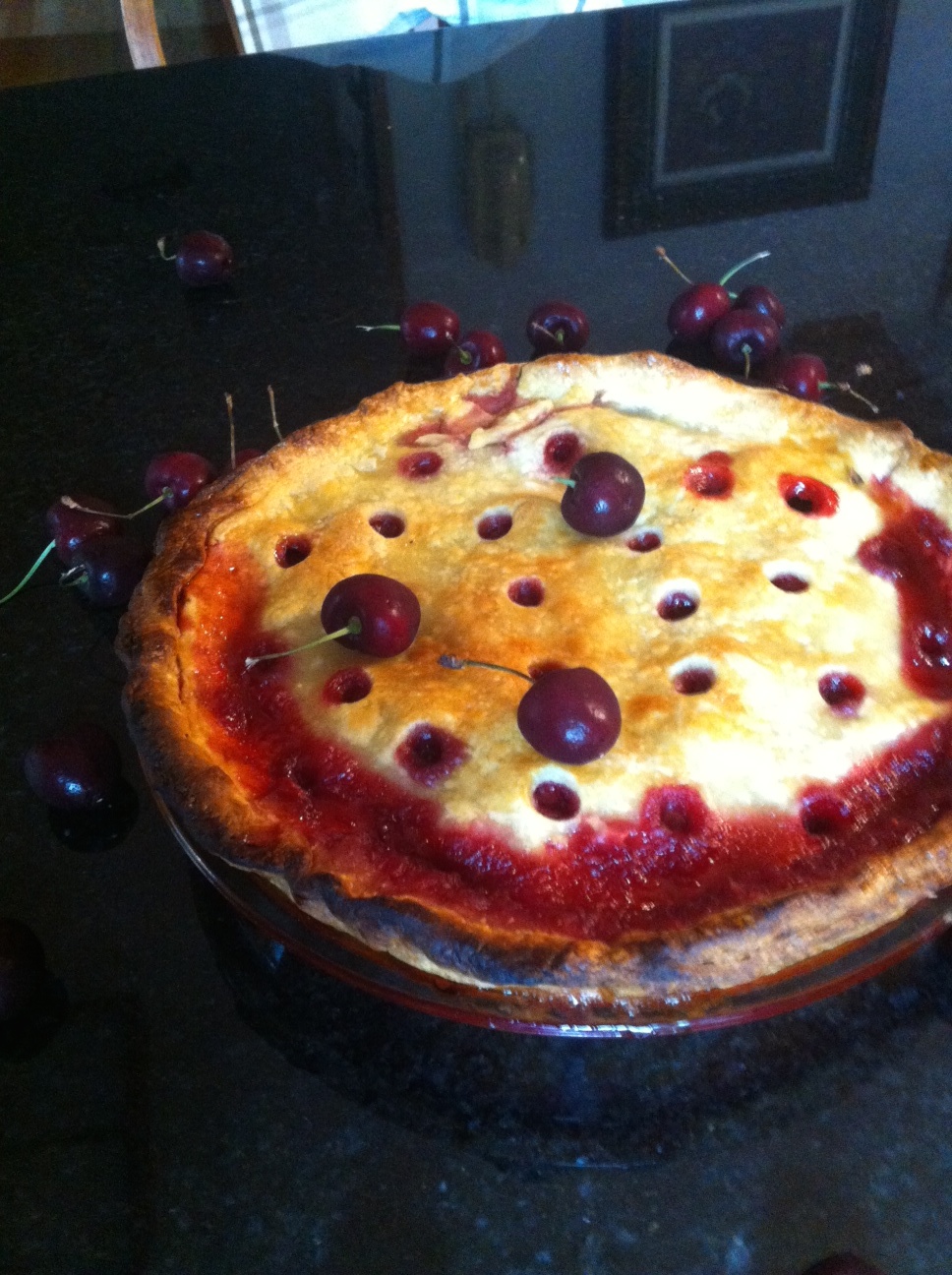 And they were. And the crust was as tender as I imagined. And the filling spilled all over the pie - just as it did in Bon Appetit's cover recipe. I felt virtuous. As virtuous as one can feel eating carbs. In a carb-stricken life. 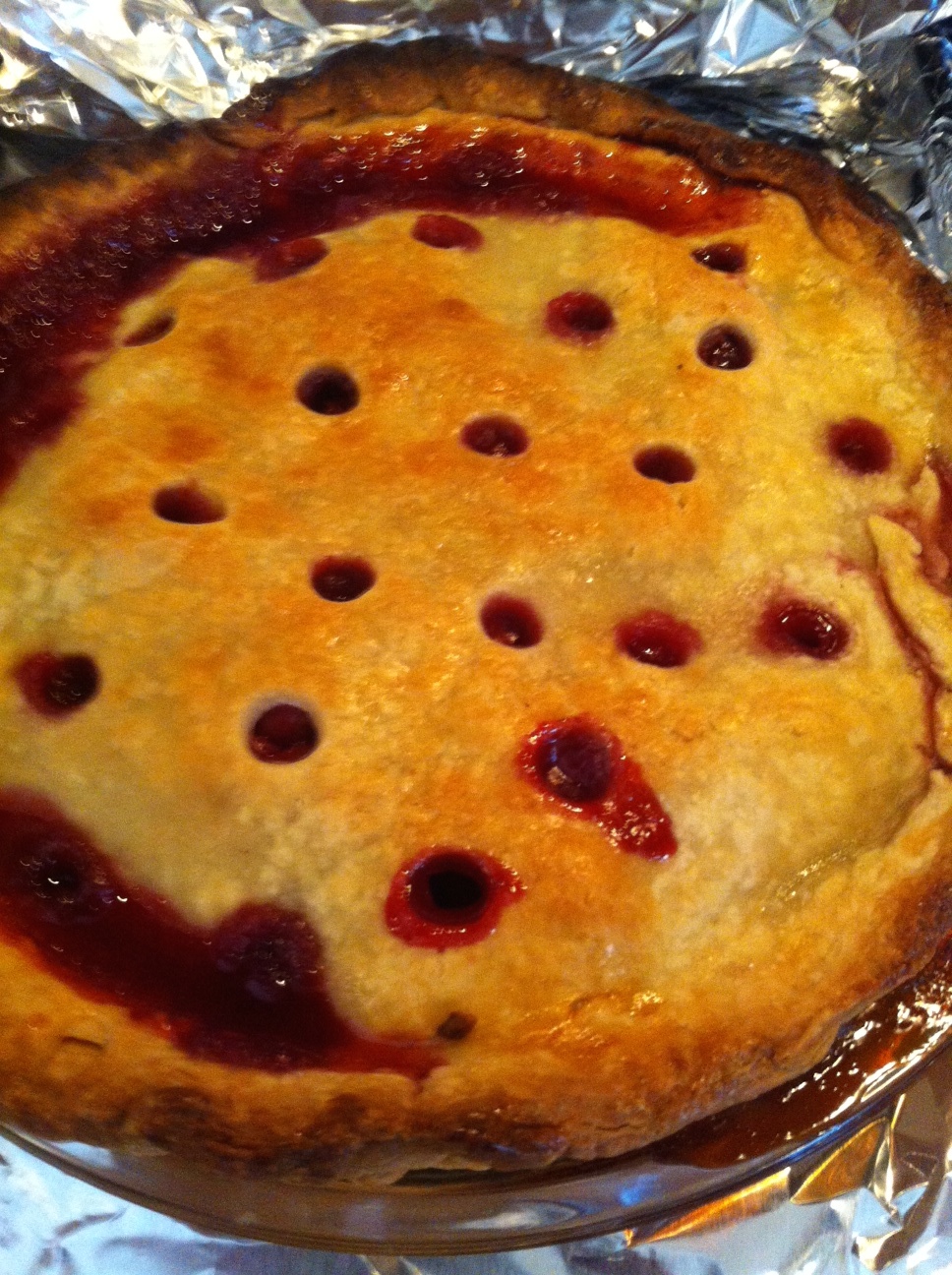 And I made an absolute mess pitting the cherries. Next time I will put on a beekeeper's suit when I pit cherries. We won't discuss other alternatives. 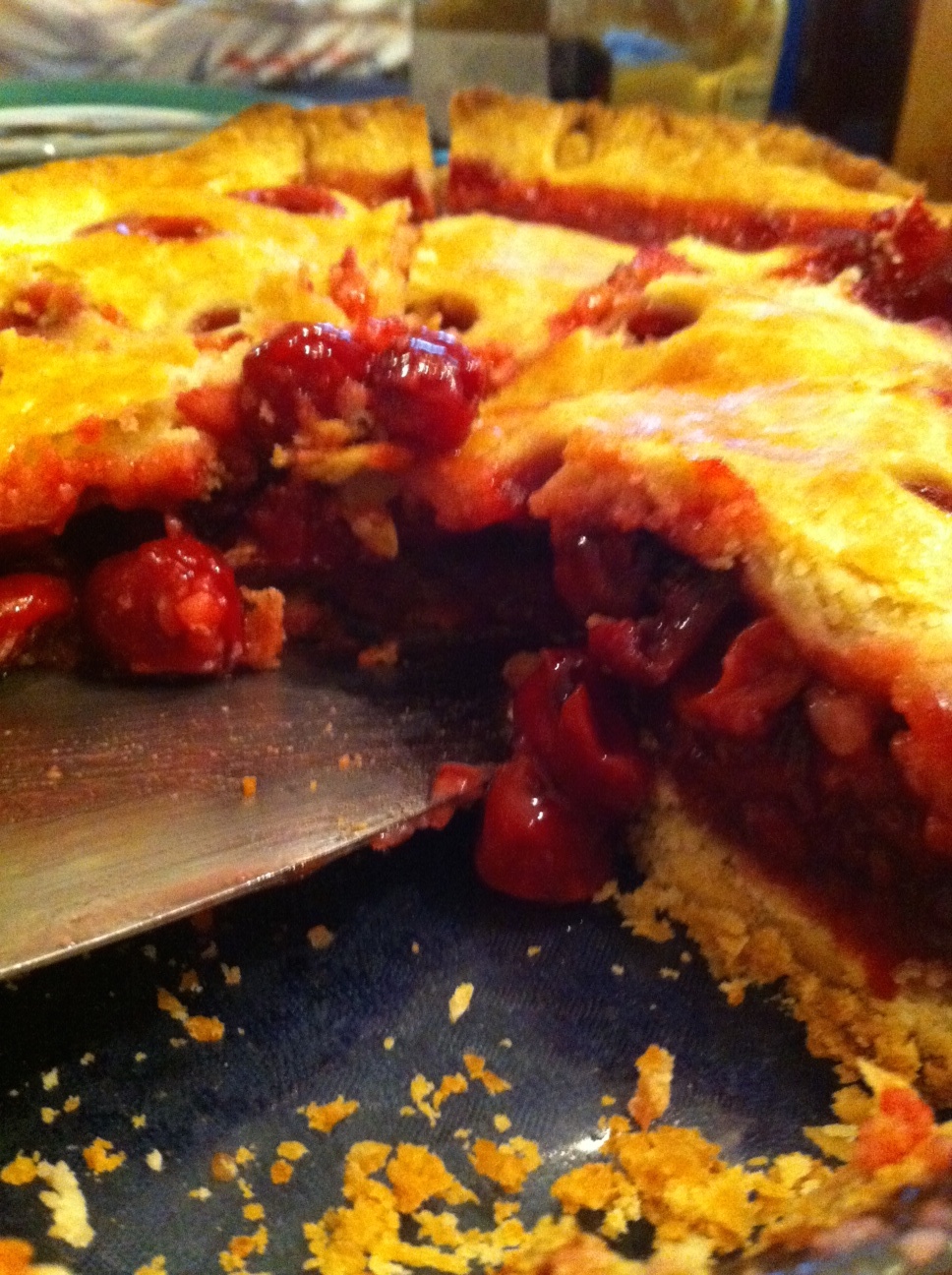 And it disappeared so I only had one piece. If you can get your hands on some sour cherries, make this summer dessert. Worth. Every. Calorie. Every. Carb. I have some extra in my freezer.... in case I need a taste of summer during Evil Polar Vortex Season.

I didn't change a thing. 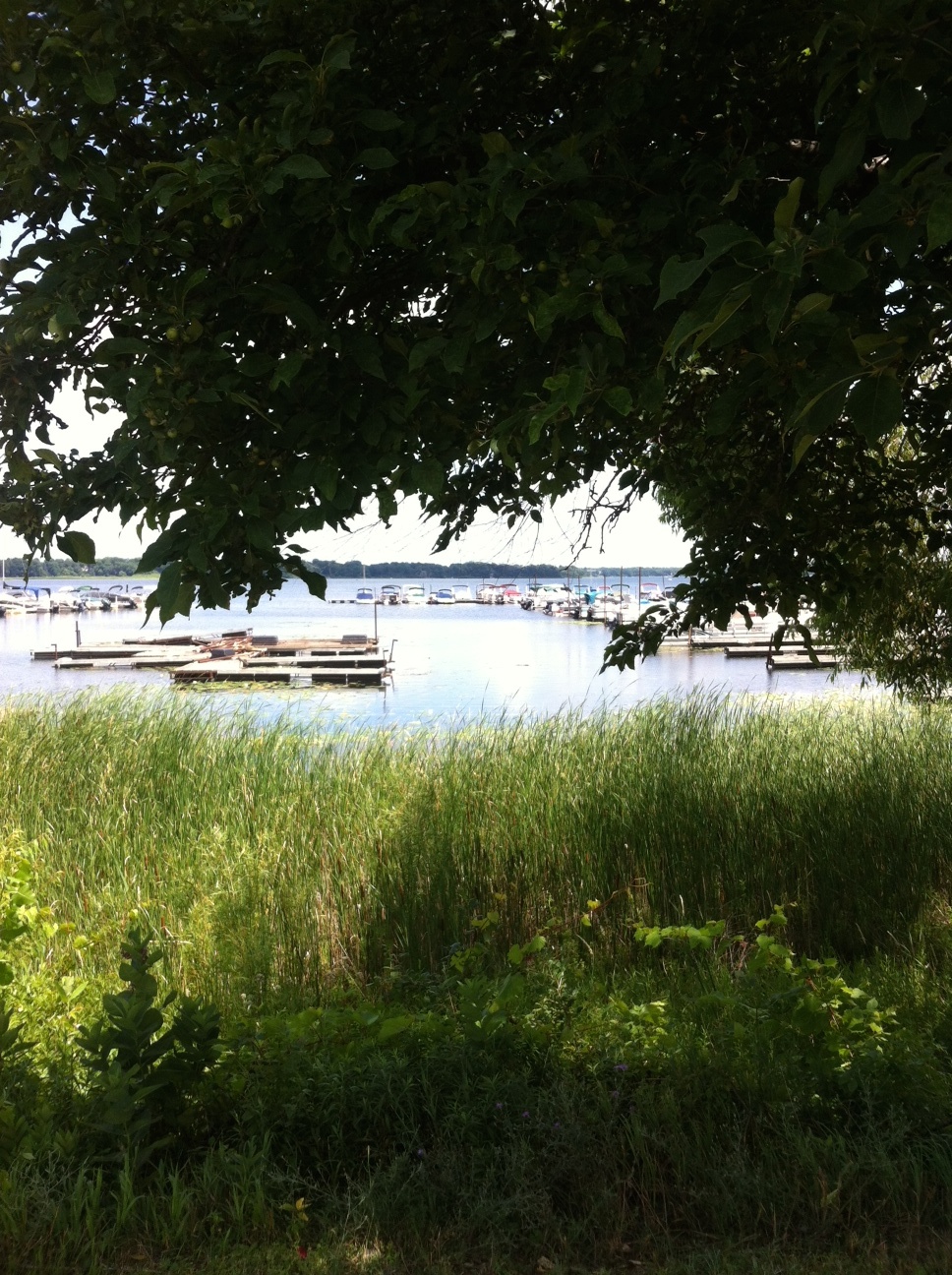 Minnesotans are lake creatures. Maybe part Druid. And a big thing is to go "up north" to Lake Superior - to the Boundary Waters, to Mille Lacs, Brainerd, Crow Wing... and it's funny because sometimes we don't appreciate what is in our backyard. Two blocks away is White Bear Lake (the photo above is what greets me from the parking lot of my favorite grocery store) ... I walk it, I meditate to it, and I watch it freeze and thaw with the seasons. And yes, I have even ice-fished on it. 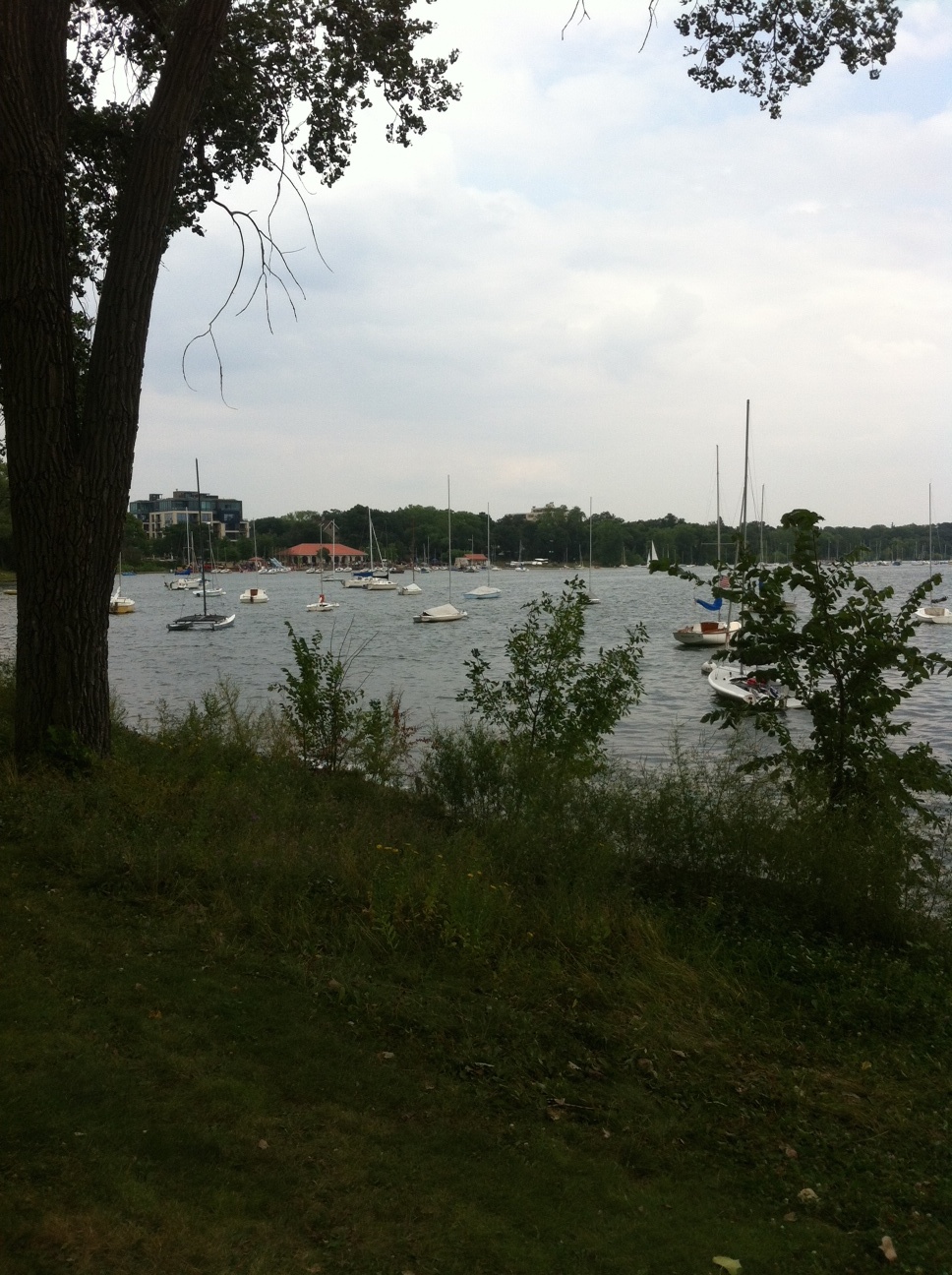 And the Twin Cities boasts many lakes - including Lake Calhoun above - which is part of a chain of lakes. A walking and biking trail spans per 35 miles taking you around many lakes - including Mary Tyler Moore's Lake of the Aisle walk. In a sense, I find a piece of the Mediterranean when we go walking. For six months of the year.

I am investigating Amarone wine. Worth the expense? If you really just intended to soak cherries in it? (Trying to recreate an Amarone Manhattan.) If you have information, opinions - please share with me. Hope you all have a lovely end-of-August week!

Hi Claudia, it's nice to read about someone who is on the other side of the world every now and then :) wish I have the self control to go on a carb free diet too but for the moment I love my carbs too much! Love that cherry pie of yours, of course cherries are out of season here all the time :P No chance of me baking this...I'll sit and drool like your cute cat there:D Hope you have a great week too!

Low-carb diet is difficult for me as I am a bread lover. Well, I need to try harder. The salmon salad looks terrific, but that cherry pie is definitely something I am not going to pass in life. Too good!

Low carb is difficult to stick with long run, at least for us. But it does work, doesn't it! What a gorgeous pie. I wouldn't be able to resist just a tiny slice :)

How funny that Pippin used to tell on Luce. That's so cute and so is he sitting on the recipe.
Sam

I loved today's post. Your photos have caused me to momentarily forget that you'll be buried in snow for half the winter. Right now that water looks inviting and your pie has my name on it :-)

Love that salad (and Ali's blog) AND the pie, what a great combination, the best of both worlds!

Love that pie! Almond flour is good stuff. And that salad looks wonderful. We've been eating tons of salads for dinner lately, too. We're not officially on a low carb diet, but we are trying to keep them down. Somewhat. Sometimes. ;-)

Hubby and I have been enjoying Denver Restaurant Week and I will need a low carb diet to make up for it! As it is I am only eating a bowl of oatmeal all day before dinner. This salmon looks delicios and the cherry pie looks like a slice of heaven!

Oh Claudia - I always love your writing. And the pie is a great bonus too. Reading about Pippin's new habits was comforting, in light of your loss. And if I could get my hands on some of those cherries, that pie would be in my future too. Re:Amarone - yes, it's worth the $$$. Bravi to you for losing the weight and sticking to it (with the rare-but-delicious-pie here and there)

Fantastic salad and pie! I bet they tasted mighty good.

I hope you are having a wonderful summer.

A low carb diet can be tough, but I think us of Italian origins have the hardest time of all! It does work, though, as I can attest by experience!

Life is a balancing act and salad and pie make sense to me.

a life with a low carbs diet is really hard for me, delicious pie !

Claudia, I have to laugh at your low carb diet blues…My husband is always going on South Beach and that means that I am also on South Beach! But I too, sneak my carbs…if my hubby would learn to eat in moderation none of us would be dieting…lol!
Your pie looks amazing…the perfect end to a low card dinner!!

If you're asking me, it would not be worth the (considerable!) expense to use Amarone in cooking. Drinking, yes, if your pocketbook allows. Now, what I don't know is whether a less expensive Amarone can be found, I've only seen bottles that cost $40 and up.

Sigh. I do love cherry pie. I didn't make one this year, although I did freeze a multitude of fresh cherries - so maybe I'll bake one this winter!

that cherry pie looks divine and love this cat fun

Wow! It looks so scrumptious!

What a glorious looking pie! Sadly my husband doesn't share my fondness for cherries, and I'm doing some low carb eating too. But I'm getting in the pie mood with the weather change, so I may be cheating in the following weeks!

Claudia, I adore cherry pie! My hands-down favorite! And oh, the Italian Amarene jam . . . I've gone through all of the jars that I shipped from Italy in May! My mom is going in October and I have an order for her to buy and ship me another box of that amazing cherry jam! I saw this pie on Bon Appetit and now I've just got to make it too! Loved reading about Des Moines and the lakes in Minnesota and Lake Superior. Brings back so many childhood memories growing up in Iowa!
Roz

Hi Claudia, your food looks so good, and your photos are lovely.

lovely photo! love this post! hope your doing awesome as the posts look too! :)