A Journey with Pie 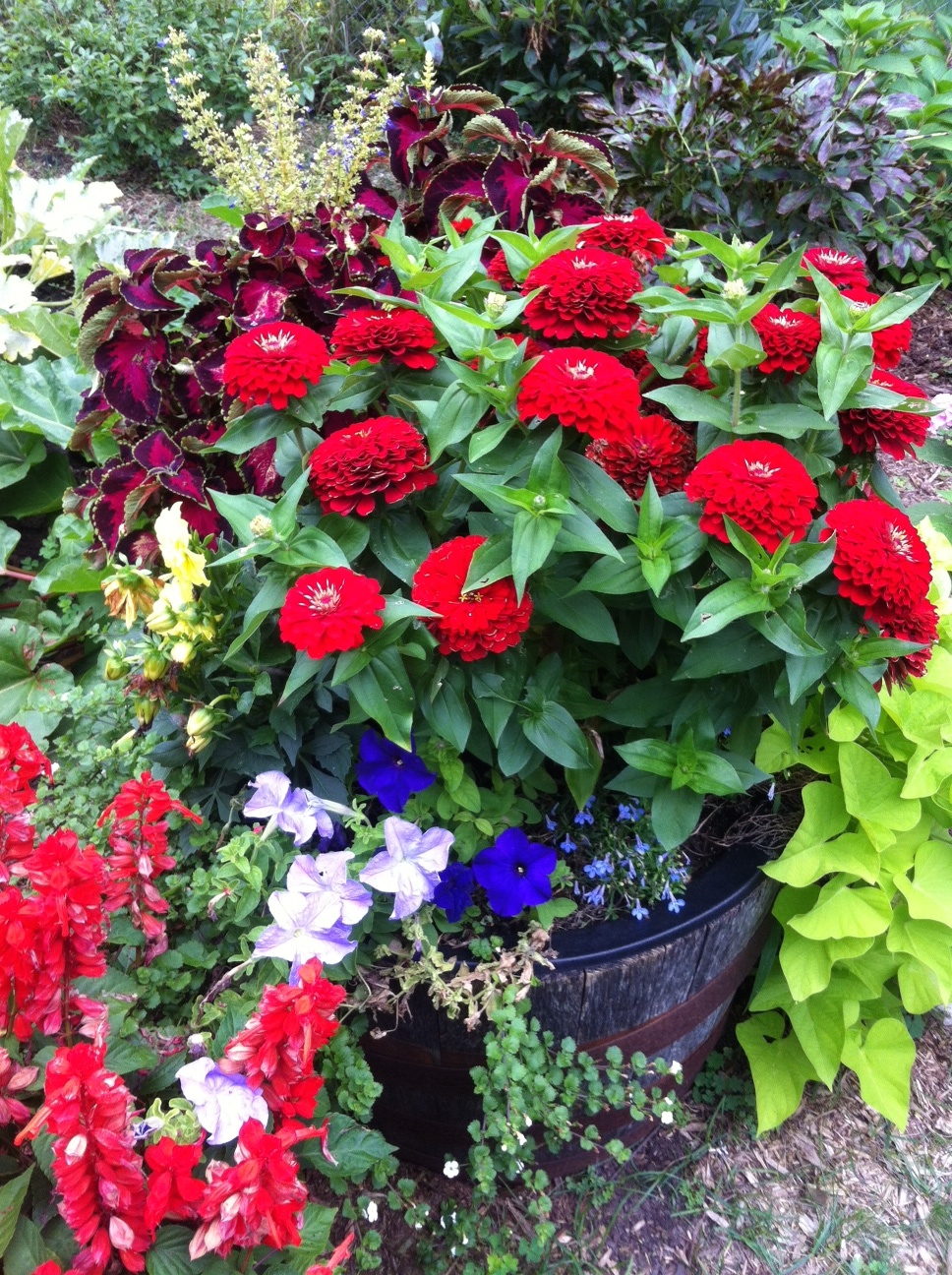 I've been thinking about this journey that I have taken with the blog. As well as "where should the journey be going now?" What began as documentation in 2007 turned into stories and the grandest part - evolved into friendships with bloggers. Some whom I have met - and some that I feel I have (met).

I garden a lot. In 2007, I kept plants alive. But in 2014, I garden. I've been grappling with a number for 2 years. The number is 60 - and what does that mean? (Aside from cheaper meals at places I don't usually go to.) I bird watch. Is that what 60 means - you morph into a bird-watching gardener? Do I find binoculars and a safari hat? 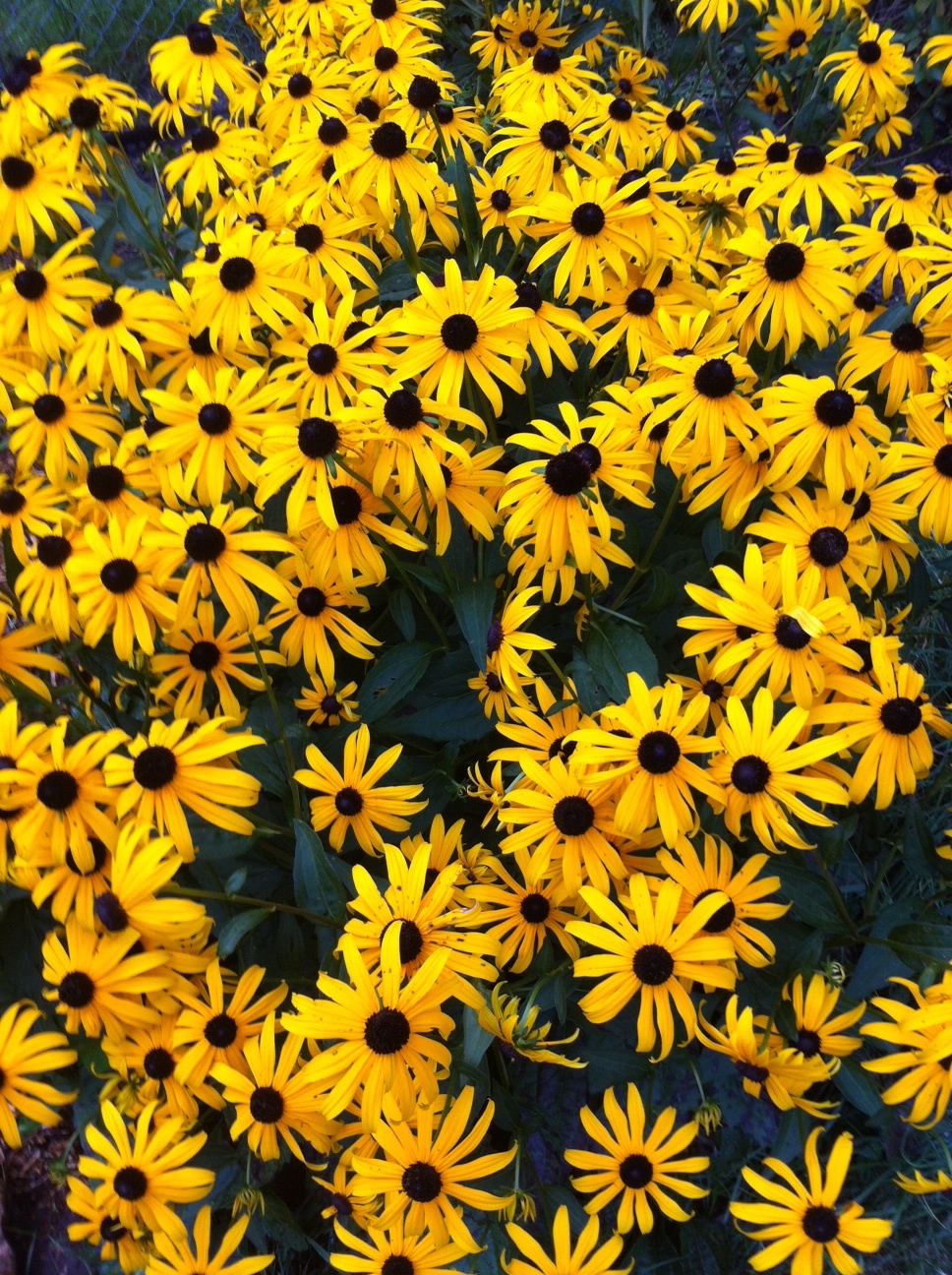 I'll be transplanting these babies next spring. To make room for more shrub roses. See - that's gardening. How did this city gal from Queens, NYC become someone who plans for next spring's garden? I grew up with a cement backyard! (Have the photos to prove it.)

After 4 years, we finally harvested more than three blueberries. And I was out there at sunrise, picking them, eating them and beating the early birds to their berries! Claudia "theatre person who would go to work in the eves" is out between 5:30-6 a.m. Is that what 60 is?

The raspberries are on steroids. Which is good - because the beetles seem to like them. I have been at war with the beetles for two years and quite frankly - they're winning. In addition to being a bird-nerd, gardener, and early riser - I am now a beetle warrior. (Or I've been reading to much of Game of Thrones and it has affected how I see myself.) 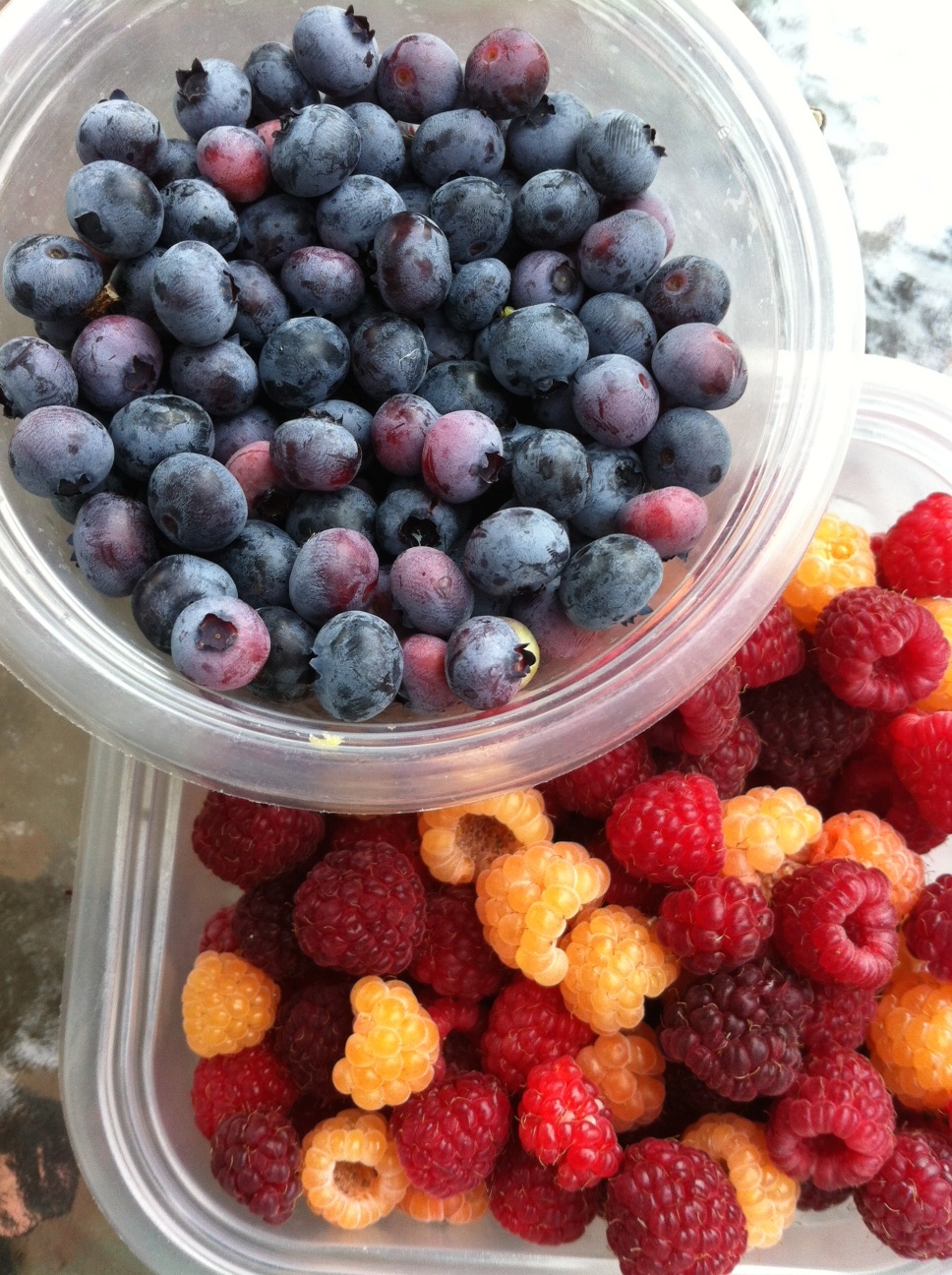 The thing about 60 - is Weight Watchers doesn't work anymore. I took off 28 pounds before going to Italy and never did finish the last 12.

So this winter Paul and I resorted to the apocalypse of dieting when you're Italian - low carb. Yes - little-to-no pasta, risotto, breads, polenta, dolci ... no wonder I haven't blogged! I have thrown my frustrations into plays - where I have detailed Italian food scenes.

CHIARA
Everything's food. Ever notice that? Even Saint's have feast days. We feast. All the time. Then we gain weight and get criticized -
ANGELA
I don't gain weight.
CHIARA
No. You don't. There's something unnatural about that. You clearly are adopted.
ANGELA
I actually eat all organic and watch the intake of carbs.
CHIARA
How can you be Italian and watch your intake of carbs? We grew up with carbs in every shape and form. Stuffed carbs. Sauced carbs. Sauteed carbs! Braised carbs! Carbs with
vegetables. Carbs made from semolina wheat. Carbs made from potatoes! And that's just the pasta! Don't get me started on the risotto! We celebrate with pasta. We mourn
with pasta! We nourish, deal with stress, and end the day with carbs. We are genetically programmed to be carbed to death! No wonder I resemble a stuffed manicotti!
ANGELA
Don’t forget the polenta!
CHIARA
I did! How could I forget the polenta! And the breads!

The cruelty of low-carbs - it works. Slowly - but it works. I am down 10 of the last 12 pounds and of course Paul is down twice that amount (because weight loss is sexist).

And I've taken to baking pies. If I can't eat the carbs, I can dig my hands into them.

The sixties are starting to scare me.

I barely eat the pies (that carb thing). But I am compelled to bake them. Some wind up in the garbage when I'm mad at the crust (while family says, "I'll eat them"). I have a nice family.

So, I've been baking pies for two years grappling with 60. I long-ago came to terms that my inner ballerina will stay inner. And I won't be going to the Olympics except as a spectator. But I thought - I know! I could bake pies! (In 60+ years, this is the extent of my problem-solving ability - bake pies?)

You do a lot of thinking when you bake pies. I highly recommend it.  And this is easy (more and more I look at ease.... nah.... I always did - there's a slug inside of me). 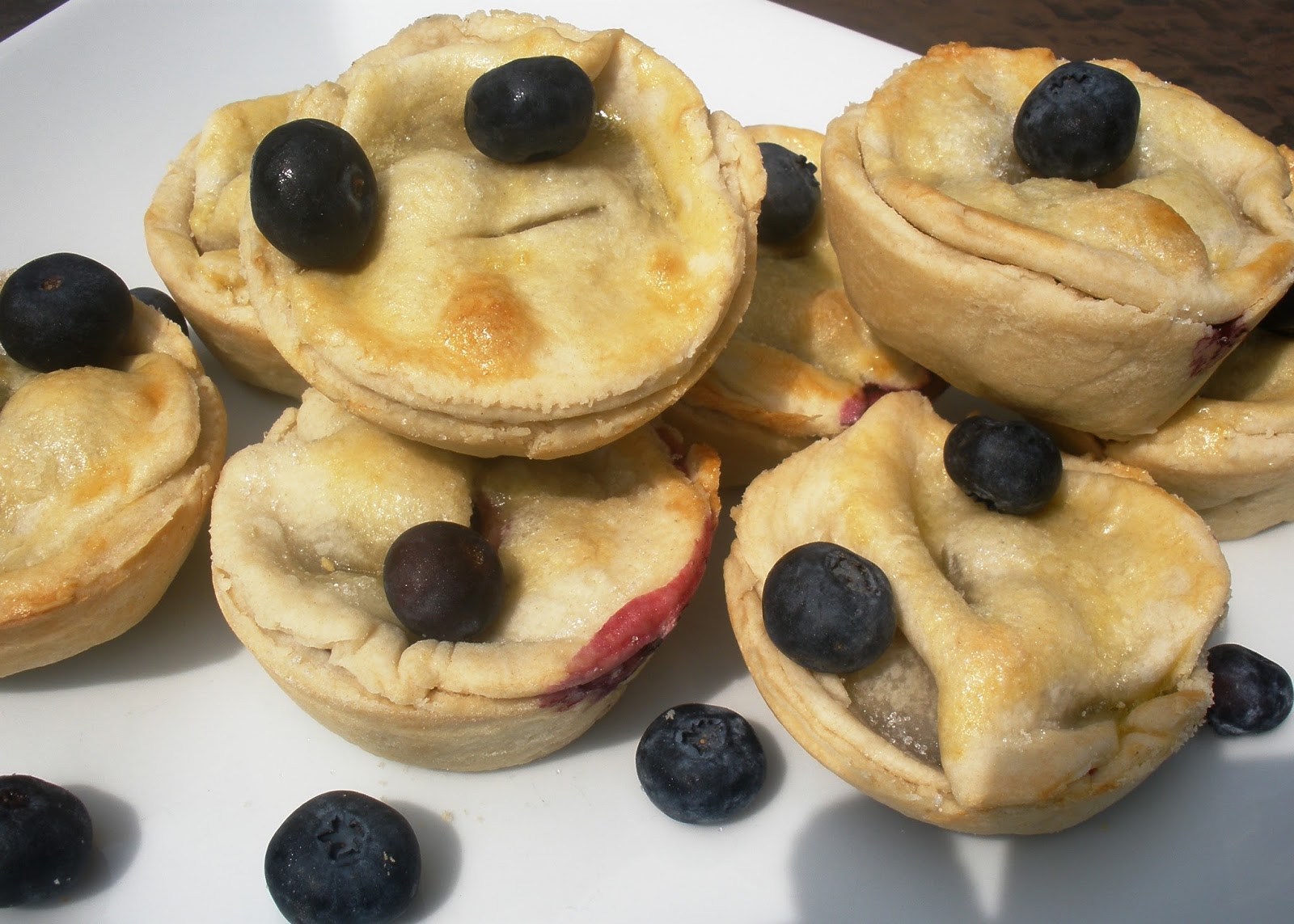 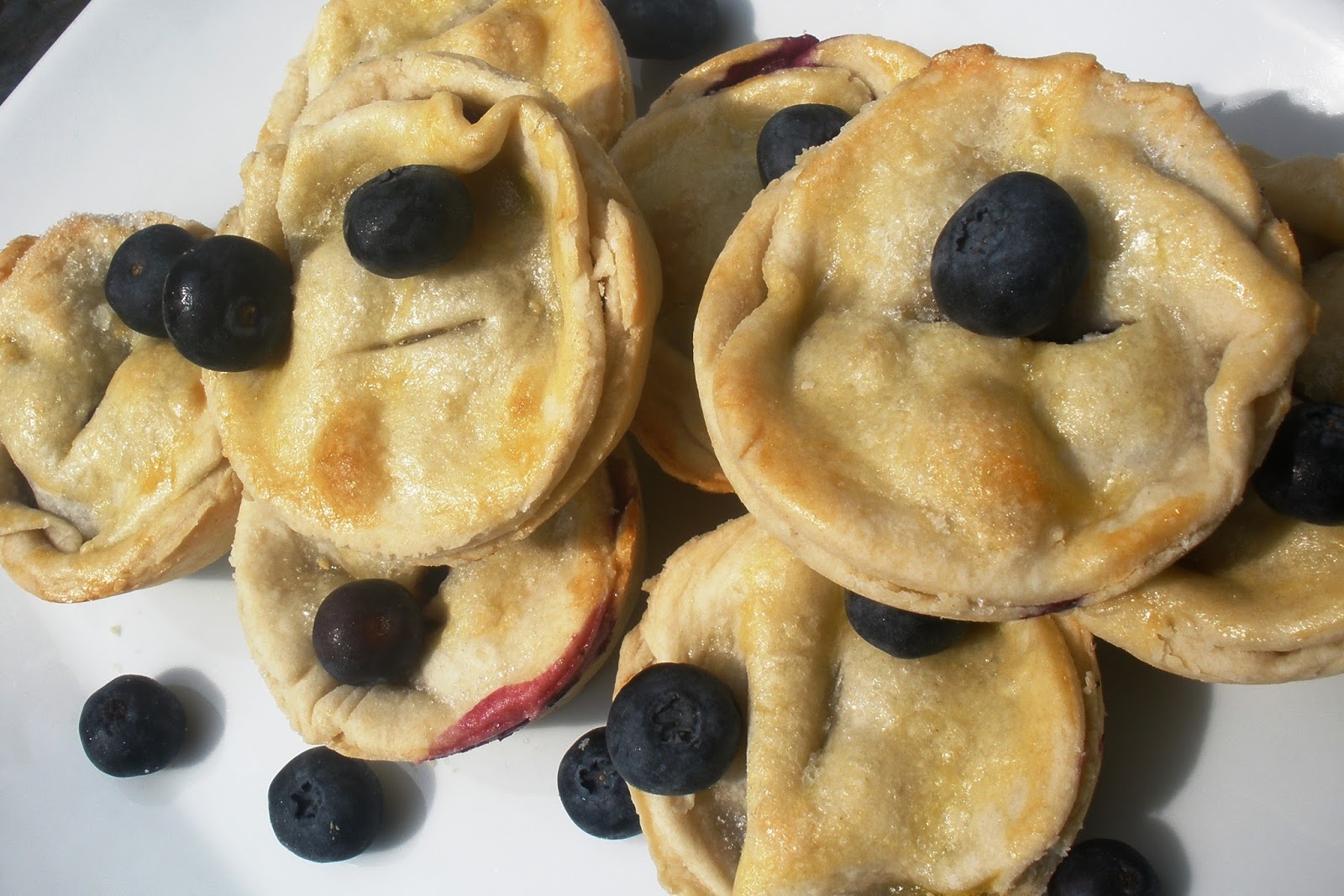 Flaky Butter Crust (Double if you are doing a double-crust pie as I did)
1. Cut butter into 1/2 inch cubes and freeze them while you measure the dry ingredients.
2. Combine flour, sugar and salt in food processor. Pulse briefly to mix. Take butter from freezer and scatter over dry ingredients. Pulse until mixture forms pea-like clumps. Add ice water, 1 tablespoon at a time and pulse to mix - add just enough water for the dough to come together. When it does - you've added enough! (When it's humid here - I need less water. I have added to much and the crust just fell apart during baking. That's when I want to throw it out!)
3. Turn the dough onto a clean, floured work surface. Knead it a few times to smooth it out. Divide in half and press each half into a circle, square or rectangle - depending on how you will use it - I put mine in muffin tins so I form two disks - but you could also make them in the shape of pop tarts.)
4. Wrap in plastic and refrigerate for at least 2 hours or up to 3 days. 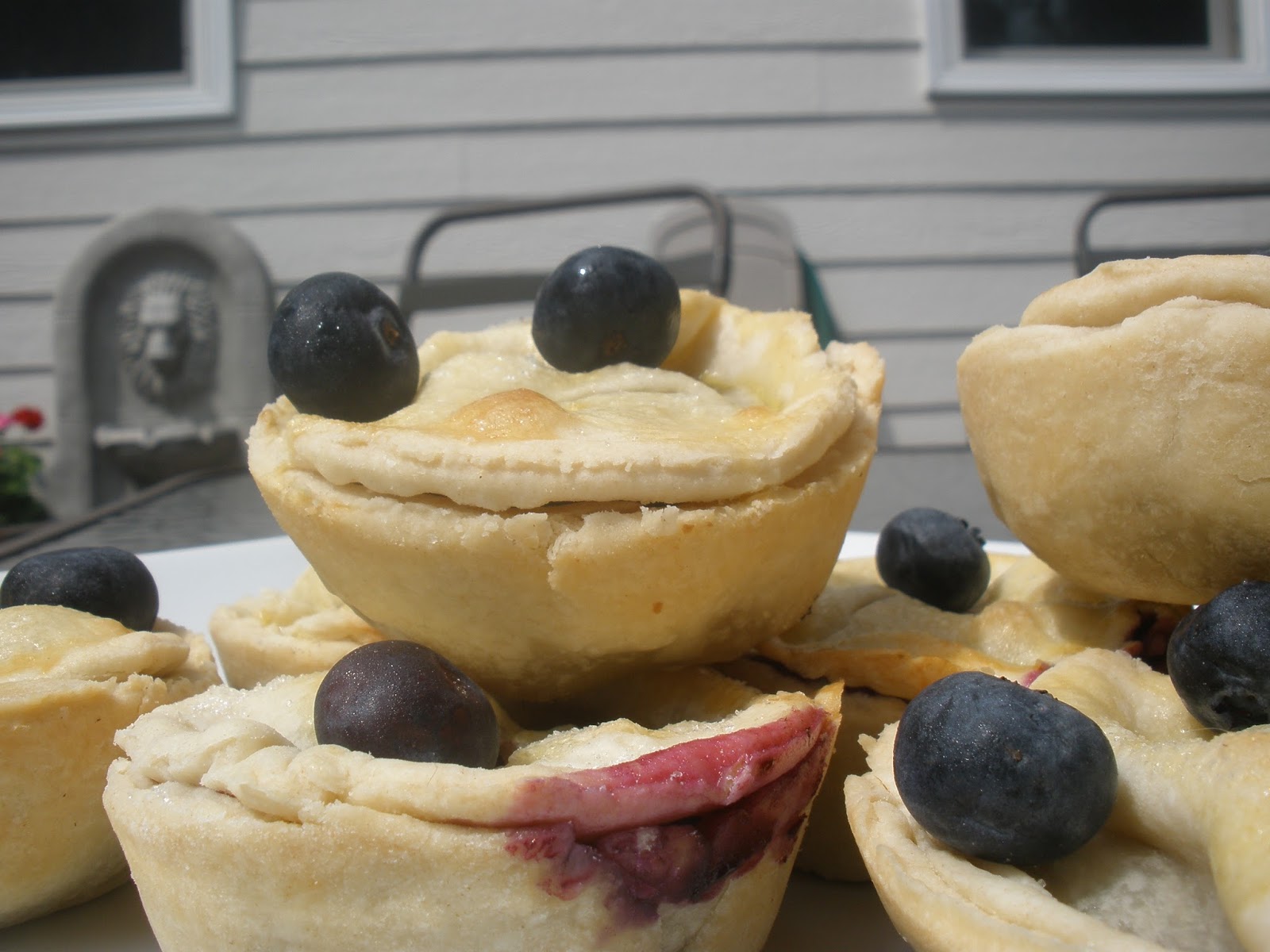 Blueberry Filling
In a bowl, combine all ingredients and gently mix. Use immediately.

Assembly
1. Roll out dough on lightly-floured work surface. Flour top of dough lightly.  Roll into a circle - about 1/8 icy thick (mine were thicker). Using a round biscuit cutter or glass, cut out as many 4-5 inch circles as possible.
2. Gently life circles and press into muffin tin leaving an 1/8-1/4 overhang. Gather scraps and cut out more circles! You should have 12-14 circles.
3. Put 3-4 tablespoons of blueberry mixture into prepared muffin tin.

If doing a double crust (and you can lattice it if you like), gently lift circle and place on top of filled pies. Crimp the edges (you had an overhang) together.  If doing a single crust - just crimp your overhang. You could brush with a whisked egg and sprinkle with sugar.  Slash some little holes in the top of the crust.

Refrigerate for 30 minutes or up to 24 hours.

Bake for about 20-25 minutes - until the tops are browned.

Let cool on a baking rack for one hour before serving. (The pop out pretty easily - run a knife or a soup spoon under the pies after they've cooled for a little bit.)

You can go the whipped cream or ice cream route on top - but they're awfully good with a schmear of mascarpone! 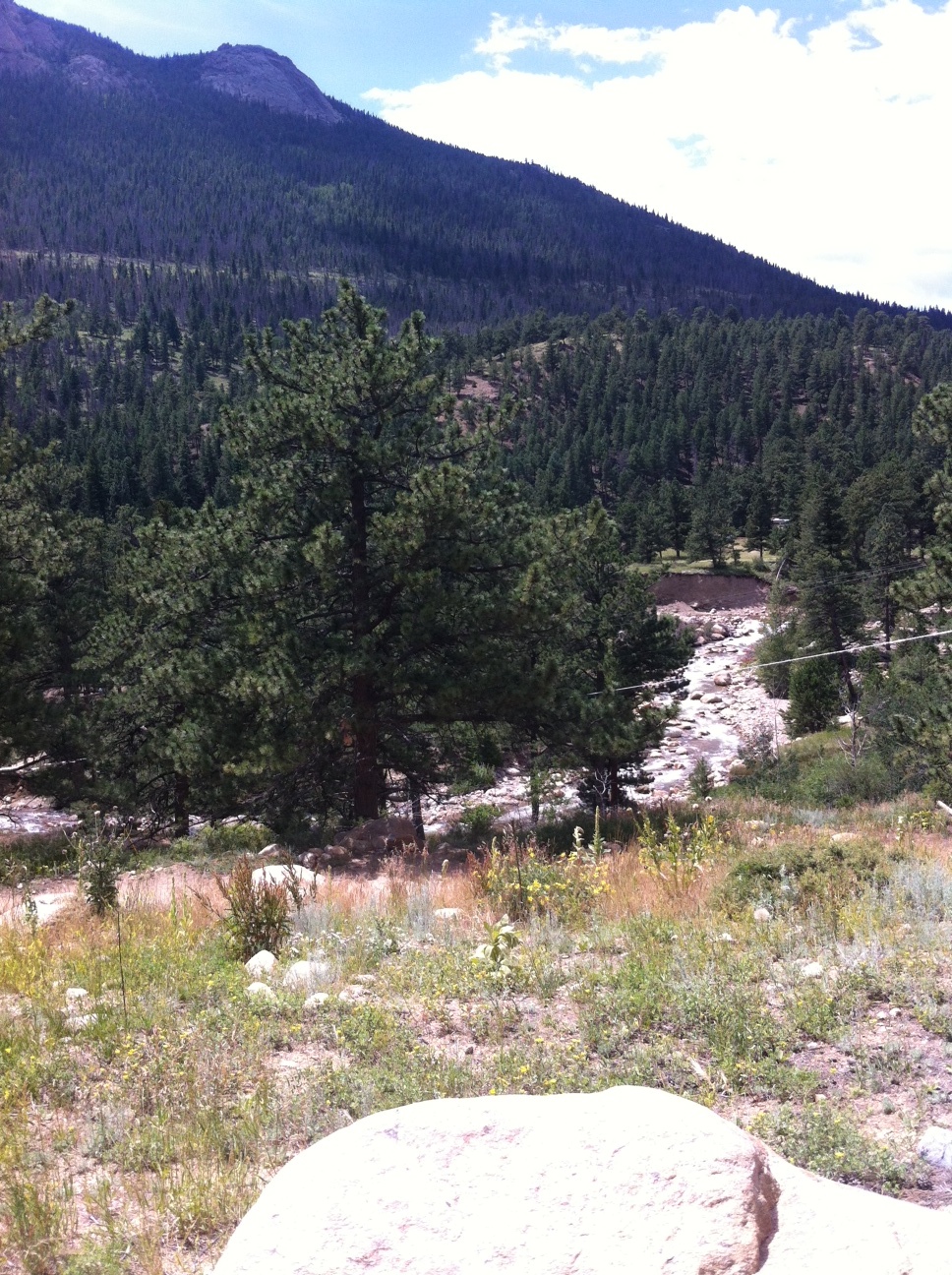 My plays are taking me to more places. La Bella Cinderella was one of three plays honored by the Unpublished Play Reading Project at the American Alliance for Theatre Education.  So Paul and I followed it to Denver and then took a road trip out west. So "sixty" may not be as nerdy as I think.

Your sixties. If your lucky, it'll happen. And things are different. I write differently. I explore darkness (even with youth plays) and who-in-the-world would have guessed that "Claudia-who-is-allergic-to science" would be writing plays using physics as a portal? I visit worlds that are a touch more complicated than they used to be in my plays - with an eye to coming to grips with the time we have here on Carl Sagan's "little blue dot."

Can you please ship to me asap these are perfect and my favorite is blueberry pie, plus since you made them they are extra special hope your doing well. Miss your recipe blogging! love this one!

Well Claudia, I hear you about losing weight after 60. It's nearly impossible but the carbs thing does work, unfortunately. I am missing eating more bread and pasta too, but can't give it up completely. Brava to you for perservering - and for the success of your plays. I only wish they were performed out here where I live so I could see one in person. By the way, your berries are luscious looking. I'd be eating them out of hand to avoid the carbs, but couldn't resist those hand pies if they were in my path.

I really enjoy making my own pie crust, too, and find it super relaxing... And blueberry pie is my fave!

Ah, numbers. Whether they're on the calendar or on the scale, they haunt us, don't they? It sounds like you're living those years wonderfully (carbs or not), and your pie looks wonderful. I love the idea of detailed food scenes in your writing!

Those raspberries are so gorgeous! Low carbs diet is hard for me, as I am bread addictive. Darn, even pumpkin has such a higher level of carbs. Those mini blueberry pies are fantastic!

Lovely post. And pie! Who doesn't like pie? That weight gain as we get older can be pretty discouraging, can't it? We just don't need as much food, but it's hard to learn to eat less. Sounds like the low carb thing, though painful, is working -- congrats! And thanks for a great post.

Weight loss gets harder year by year and my doctor warned me that men lose weight easier than women, so give up trying to be keep up with them. Sexist is a great word to describe it. Low carb always works best for us, but it's hard to stay on for the long run unless you're willing to give up bread and pasta. Enjoy your pie and make up for it later.
Sam

Oh, your blueberries are fantastic, I love blueberries! You are so right about weight loss in your 60's. I'm at the high end of 60 and it gets harder each year and WW doesn't work for me either. Good luck to you with the low carb diet! I really enjoyed this post!

I am smiling!!! Somewhere in my mid forties I turned into a bird nerd too-Backyard birdwatching, I have a pair of eastern bluebirds that are nesting in my yard. I feed them live meal worms! I grew up with concrete under my feet (Miami) and I garden like a crazy person…I have learned to share my garden with Mother Nature's pests and critters-you can manage them but they can't be beaten.

it's really hard to lose weight after 50, also following a diet the results are minimal, it is demeaning, I know very well Claudia....but sometimes a delicious bite can change your day in better way(I have to improve my english, sorry...)

Have a great week.

Carbs are my downfall for sure, and you are certainly right about eliminating them, but I still say everything in moderation. These hand pies look delectable.

Oh I hear you on the age and weight loss challenge. Like you, I lost 26 pounds, but my midnight pasta binge is sabotaging all of my efforts lately. I'm convinced that I want to live in Italy in my elderly years where age is respected, wrinkles are ok, and my daily goal will be to prepare and enjoy fresh pasta! Welcome to the wonderful and delicious world of gardening too!
Roz

just beautiful love these pies and blueberry is my favorite!