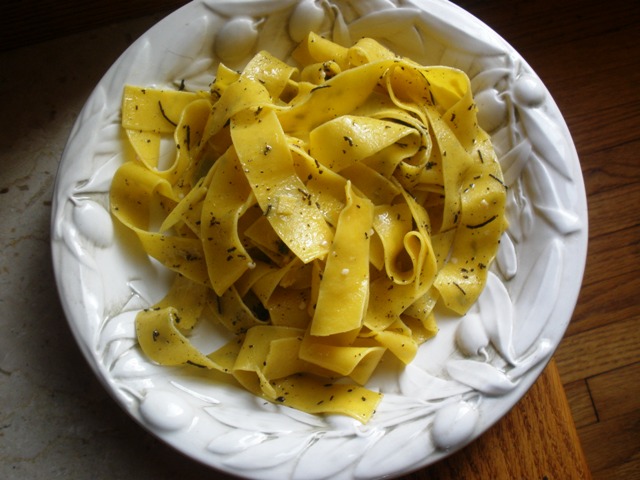 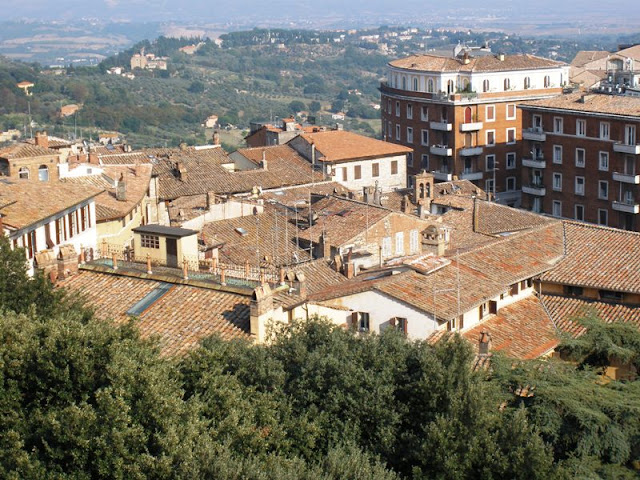 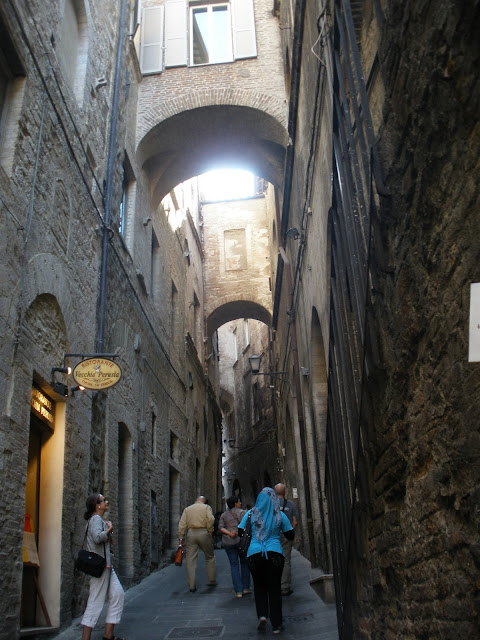 It was our second to last meal in Italy. I hesitate to count the last one at the hotel by the airport... 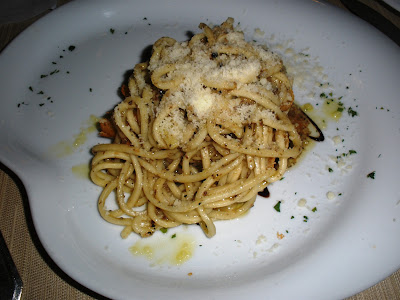 If you swim in an ocean, waves of salt water filled your senses. The fresh salty air stays with you long after you've left the beach. And that's what having a fresh black truffle is like. Only, it's waves of the earth that rock you. 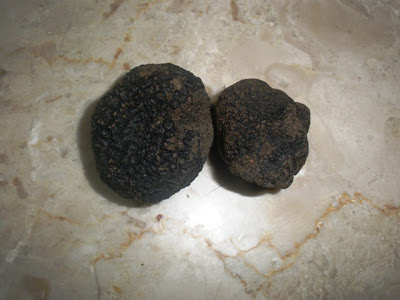 Musty, sensual ... downright sexy. They may be homely little creatures, but don't judge. These little black truffles flirt and charm and finally seduce.

After a snowy winter with cold temps below the usual frigid temperatures, I was not enamored of the outdoors. And so put nose-to-grindstone. And just wrote. With amazingly good results. My quirky And the Universe Didn't Blink was chosen as part of a Playwright's Tease evening in the Twin Cities - introducing Twin Cities playwrights to Twin Cities theatres (what a novel idea!). La Bella Cinderella won a playwrighting contest and will be touring the Prince George County Parks in Maryland this summer and Cap o' Rushes won another playwrighting contest and will be part of East Valley Children's Theatre season next year. (And I get to go to Arizona in the dead of the next Minnesota winter!) Heady stuff! Hence: the black truffle. I won't kid you - it's an investment.

The upside of using truffles is the recipes are just plain easy. The truffle does all the work - just by being.

Before cooking, I put Luce in jail. 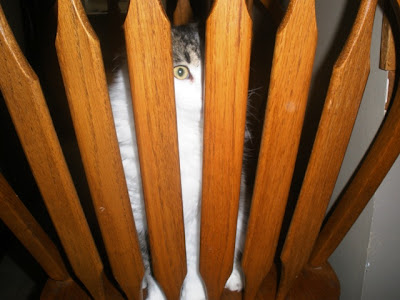 Because he gets into things. 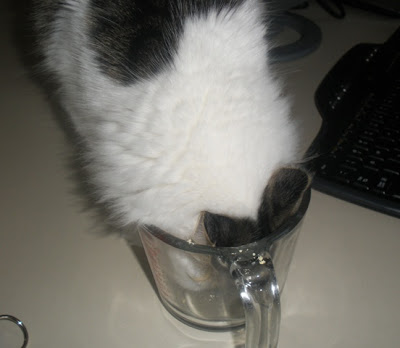 This is from Mary Ann Esposito's Ciao Italia in Umbria. Aside from changing the shape of the pasta, I kept the recipe as is. I thought the truffles would stick better to the tagliatelle than the spaghetti. When you invest in a truffle - you don't waste.

You just boil your pasta and then stick it in a skillet and you're done. My kind of recipe. 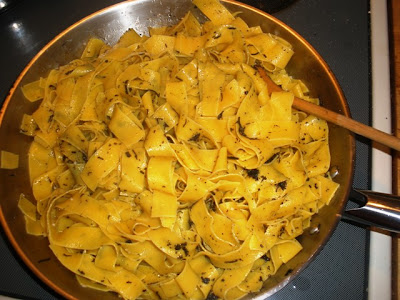 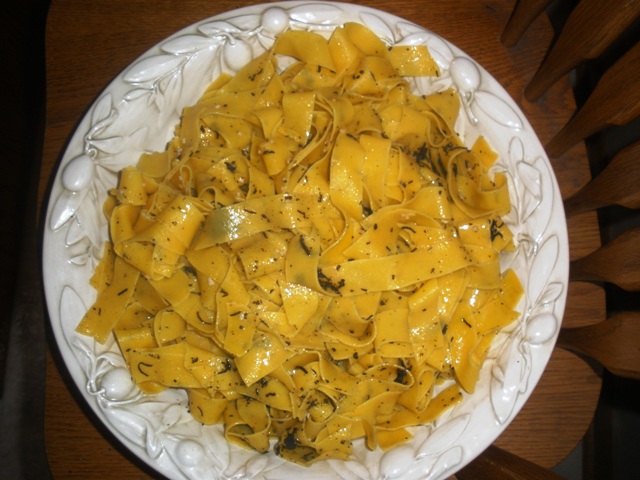 I just wanted the truffle! So I left it plain.

The night before or the morning before:
Clean truffles gently. Then: slice thin or grate or shred or peel the truffles and put them in a shallow bowl. Pour some extra-virgin olive oil over them and let them sit overnight or all day covered with plastic wrap - at room temperature.

Cook pasta according to package directions. While pasta is cooking, heat 2 tablespoons of the olive oil from the truffles in a large skillet. (I didn't - I used fresh olive oil - I didn't have enough extra oil - the mushrooms soaked them up - so maybe be very generous when pouring your olive oil over the sliced truffles).

Cook the garlic very gently in the olive oil. (I warmed them for awhile and kept the heat on low heat).

Turn off heat and add the rest of the olive oil and the truffles. 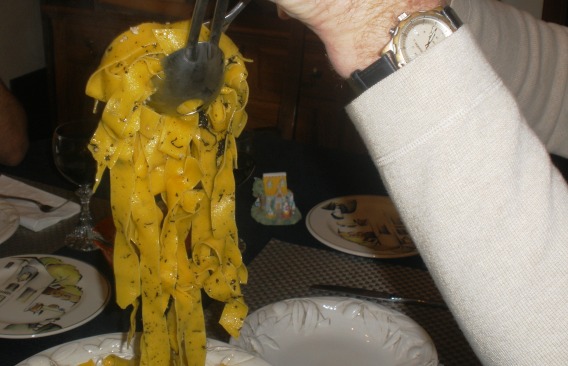 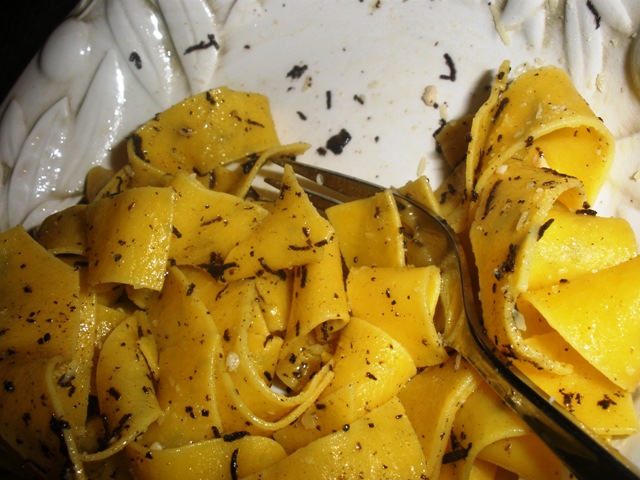 I've spent 18 months pondering the life of our universe - how a young girl might be comforted by the loss of a loved one if she understood how connected we all are to each other through it's presence. The truffle may not connect me to the universe but it does give you the earth. The beauty of it - is its taste is the song of the earth. I will be investing (without taking out a second mortgage) in the Oregon truffles - they don't travel as much and may be just fine for my needs. And I will be trying the jarred ones.

My truffle came from Urbani in New York City via Italy. It was quite good - but not as perfumed as the one in Perugia. Traveling does that to a mushroom. But no regrets - it capped a Siberian winter and welcomed spring. (I think it's coming - the ducks are back - looking at the frozen lakes and no doubt quacking expletives.) 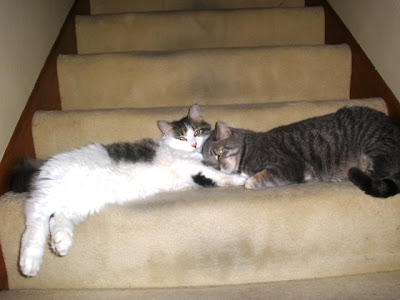 Still pondering a blog for Luce - or a picture book. Wonder at the wisdom of giving him such an elegant name. 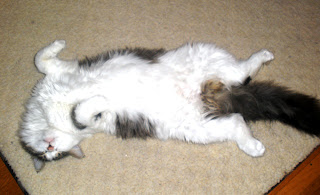 I have never tasted truffles, Claudia. I see them in Wegman's around the holidays, priced at $1100 per pound! I would love to go back for my third visit to Italy. xo

First, Congratulations on your two plays winning those awards, Claudia!! You certainly deserve a celebratory dinner and I would think truffles make this dish celebration worthy! I have never had truffles either. Your dish makes me want to go in search of them. Lovely!
Love those cats!!

Love the photos of Luce. Sometimes I find it hard to keep out of things too!

What a great way to celebrate those wonderful writing accomplishments of yours! I love the wide pasta you choose to use here and your writing (and Luce is that "cage" made me laugh. How many days till your next trip to Italy?

I have not got the privilege to taste truffles before, looks so delicious the way you cook it:)Luce is so cute and mischievous!

Oh, I love the flavor of truffles and tagliatelle are some of my favorite pasta. A mouthwatering combination!

Your kitties are so sweet! I'd love to cuddle them.

I've only enjoyed truffles while in Italy. They're just too expensive here. I do enjoy Mary Ann Esposito's cooking, though, so, this dish must be doubly delicious. It sure does look good!

Claudia I never try truffles but always heard about them!
this tagliatelle look delicious!
and I love Luce pictures!!

It is GREAT to celebrate wondrous achievements - especially with food gifts! I love the truffles in this delish looking pasta!

There's something so festive and sophisticated about black truffles isn't there? Your rendition looks so delicious!

The last two photos with your comments made me break out in a laugh-too funny.

Until you wrote about pondering the universe, love and loss and then connecting it with something so earthy like truffle...I thought "Holy cow, I so get that".

This is a beautiful dish. Pasta to me is soul food.

Luce is such a cutie! It's been ages - at least a decade - since I've had truffles. Definitely something I need to cook with again. I love how simple your pasta is - just excellent. Thanks (and thanks to Luce, too!).

This dish would also transport me right back to a Italy, Claudia! It looks so wonderfully aromatic and enticing. I know why truffles are so expensive as their flavor is priceless.

This was a wonderful celebratory meal! Congratulations on all your good news!

Luce-- yes, a children's book about him would be fun!

I have never tasted the fresh truffles...the noodle must be divine!

This would transport me to Italy too Claudia. What an elegant dish.

I see you have eliminated Anonymous comments. I've been thinking about doing the same because of spam. Is it working and has anyone complained about not being able to leave a comment? I tried this once and a couple of bloggers who didn't use Blogger said they couldn't leave a comment.
Sam

Mister Meatball: Ok... yeah ... in my defense, I wrote that blog with Luce sleeping and purring on one arm.

Sam: Yes, it eliminated the spam. I did have one complaint - but my spam grew at such an astonishing rate, I had to do something. I may change it later.

What a lovely dish, Claudia. The photos are enticing, but your words are always the true lure. I'm thrilled that your work was recognized. That's worth a white truffle ot two :-). Have a wonderful day. Blessings...Mary

Truffles are worth every penny, and this would be worthy of homemade pasta as well! One of these days, I hope to get to Italy! http://thecreeksidecook.com

Congratulations Claudia, I'm dancing a happy dance for you! I would love to celebrate moments like this with you especially with a truffle as a lure hihi.
Enjoy the rest of the day!
Malou

Congrats Claudia so happy for you and love the photos of this delicious dish! Those babies at the end are so precious just darling! hope you have a great week!

Congratulations on the awards Claudia...and I love truffles...I love this simple dish, so you can really enjoy the truffle...yum!
Have a great week :)

I think Luce needs his own facebook page :) Your pasta and memories are both wonderful...doesn't it seem like the last meal of a trip is always something lousy at an airport? Are you getting snow with this big storm???

What gorgeous pasta! I hope I get to taste a real truffle one day! Congratulations on your plays and your sweet kitties. You got yourself a kitchen cat.

Your pasta dish looks amazing. You have one lovely curious kittie.

Thanks for this black truffle recipe because I just bought 2 smaller black truffles & didn't know how to use them right! I love them in a rich omelette too!

A lovely post! You are right to put the cat in jail: hahahahhahahaha!

I have always wanted to cook with black truffels , but could never get my arms around it . it looks superb!!

I would so love to splurge on some Italian truffles someday, even if only to have a sliver grated and sprinkled on some pasta. I'm sure this recipe was worthy of cerebrating your literary accomplishments this year Claudia. Love the photos of Italy too!