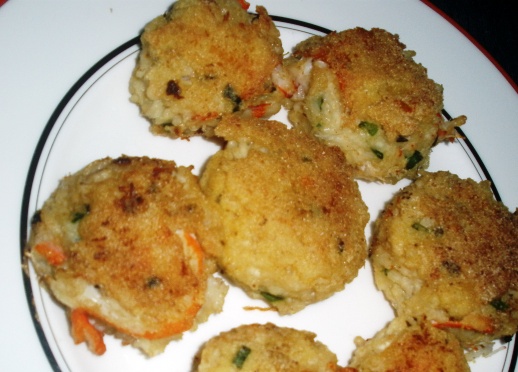 Once or twice a month, Paul and I make the great trek to Surdyks in Minneapolis (it requires crossing the Mississippi - something people in the Twin Cities are sometimes loathe to do). It is my go-to place for fresh ricotta (for spoon-feeding myself), mortadella with pistachios, fun pastas (otherwise known as "artisanal pasta") and whatever else strikes our fancy. Last week some risotto-crab cakes struck our fancy.  Inexplicably last week, we had some fresh crab leftover. That doesn't happen often. But I knew what I wanted to do with it. 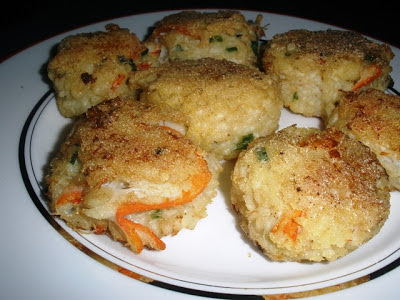 It's the end of January. It's been a dark day of sleet and snow. I think carbohydrate meals were created in January. These are certainly an appetizer but my sister and I could make a meal out of it. I had both kids home and so I continued my double-dipping of carbs - serving it with pasta and shrimp. To be sure there was also broccoli so we were not nutrient-starved. I could hold up my semi-virtuous head.

I love that these are crabby. In fact next time I will probably use less risotto and make them crabbier. Use fresh crab (I used snow crab clusters - use what you can find) or some good canned crab. Play with the amounts - if you want to use one cup of risotto and two cups of crab - go for it.  Use all olive oil or butter for the sauteing or just bake them (I drained them on a paper towel and then threw them in the oven). 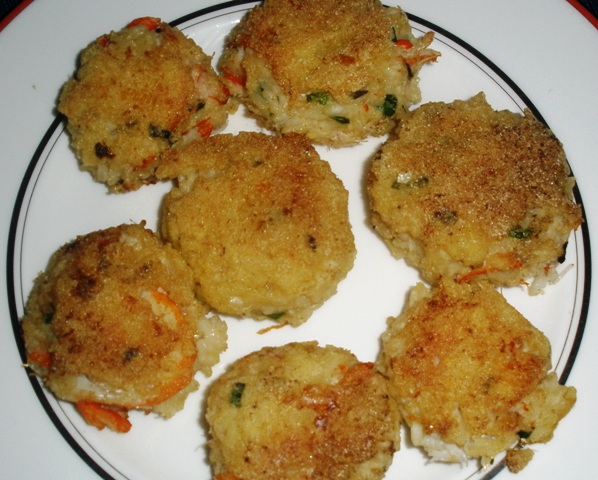 A primer on "How to make risotto" can be found here. It just adding hot broth and stirring. It's perfect for people who like to get into a zen state sometime during the day.

In a medium-large bowl combine risotto, crab and scallions (or herbs). Refrigerate for 30 minutes. Cover a flat plate with a thin layer of corneal. 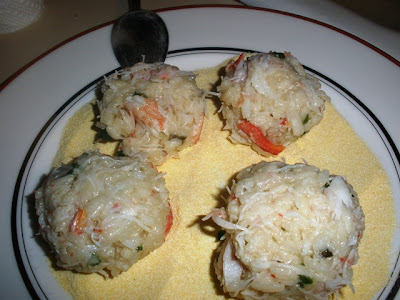 Form your mixture into 8-12 balls and flatten slightly. Put them in the dish with cornmeal and press them down. Turn over and do the same. You do not need to coat the sides.

In a large skillet heat the butter and olive oil. When hot, add your crab cakes and cook about 3 minutes per side (until lightly browned on both sides). (Add about 4-6 at a time so as not to crowd). Drain on paper towels. Serve immediately or rewarm in a low oven until heated through. 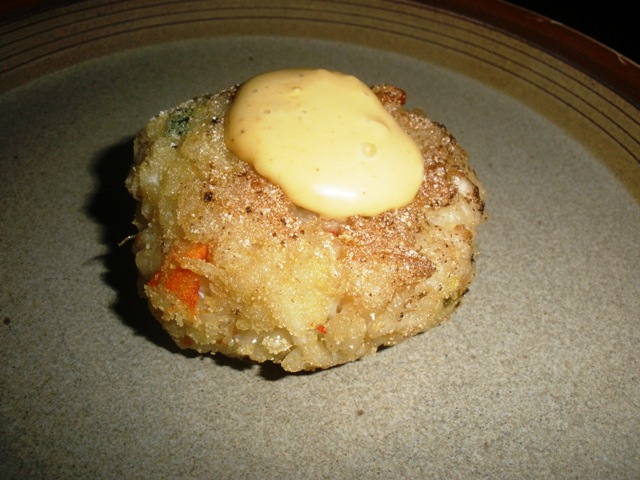 Serve with an aioli or creme fraiche. It's January. Indulge. A shorter winter month is on its way.

My mouth is watering, I want these!

This is a stroke of pure genius adding crab to the leftover risotto.

Wow...two of my favorite foods in one terrific sounding dish. The risotto crab cakes sound terrific.

These look absolutely fantastic! I would never have thought of using risotto rice - wonderful!
mary x

I am drooling! I miss crab and these crab cakes look divine!

Your crab cakes loos so good I can almost smell them through my computer--yum! I could eat hem all right now :)

I desperately need to find a "Surdyks" type place here, Claudia! I can find every kind of Mexican food ingredient here --I've never seen so many hot peppers-- but Italian ingredients are rare. That is the thing I miss most about NYC..wah!

I just love the simplicity of this recipe. I love Risotto and like you never have leftover. I have never thought about using it for these fine cakes! They are truely a work of mouth watering ART!

I'm doing something wrong because I never have leftover crab or risotto. I love your escape place, I'd probably venture there too. Might have to whip up some risotto and get a crab just so I can try this. If you don't like the orange cookies, if you have a type of cookie, texture or cookie to compare it to, I can probably make it. Enjoy your week my dear.
-Gina-

Claudia I love crab cakes and these look absolutely delicious with risotto!

Oh, yeah! The crabbier, the better. I was in Iowa this weekend...we had freezing rain...which makes sleet sound inviting :)

I love crab cakes. Unfortunately, I can't ever make them because my husband has a serious allergy to shellfish. I don't even eat them in a restaurant because I'm afraid of cross-contamination! However, I'm going away in March without him, and I'm seriously dreaming about ordering crab cakes.

I love crab cakes and I love risotto, but I've never made risotto crab cakes before. Great idea! Fun recipe, and one I definitely want to play with. And I love it when someone says to do just that - play with the recipe. 'Cause that's what I always do anyway! Good stuff - thanks.

Very mouthwatering. They look delicious! I could imagine how pleasant that trip is, just knowing you are going to find those delicacies is reason enough to smile.

Oh Claudia...and now it s my time to want these crab cakes with leftover risotto...and I had dinner not long ago. I just can imagine the taste and the texture of this cakes.
Have a wonderful week!

I love a good crab cake...and after seeing your post, I'm certainly craving one! Thank you for sharing. This post was a bright way to warm up a my cold Tuesday morning. I hope you have a wonderful week!

I'm laughing at the leftover risotto and crab! Something we never have either. I bet these are amazing! I love the idea of pan frying them and getting them all crusty on the outside. That's the best.

oh la la these look so good, and I am the same don't have left over risotto :-)

Trips to specialty stores are always fun! I'm so glad it gave you this great recipe idea!

Ah, Surdyk's. I remember it well. These look absolutely delicious, and since crab is one of the things I have pretty good access to, I will try your recipe.

Ooh, these sound dreamy. Comforting. Rich and wonderful...
No such thing as leftover lobster? Ha!
LL

Ooh, delicious. Crab is hard to come by down here, but I might take a trip to the pescheria and see what I can find to substitute. There's certainly no shortage of fish there; let's just say that yesterday we feasted on herby, garlicky mussels, baby calamari barely the size of a thumbnail quickly dredged in flour and shallow fried, and sweeter than sweet gamberetti. The best thing? They were all bought half an hour before eating and cooked up by my flatmate's mamma. I love Sicily. ;)

Oh wow…I would love to eat one or maybe two of these beauties! They look scrumptious! A perfect dish to take the chill off of a winter day!

Ohhh, my goodness. Those look so delicious. I went to Italy (for the first time) in May of 2012 and cannot stop gushing about it. I hope to go back and learn how to cook there! In the meantime, I will use your blog as my inspiration :)

This is a perfect way for using our comforting leftover risotto...well done Claudia.
Buon appetito and a wonderful week ahead.

An excellent idea! I also rarely have leftover risotto lying around but, hey, this looks good enough to make some specially for the purpose.

By the way, isn't it funny about rivers? In New York, as you know, many New Yorkers never think to cross the Hudson (less so for the East or Bronx rivers) and now that I live in the DC area, the same goes for crossing the Potomac to Virginia. I think there's something in the human mind that tells us that rivers are borders—big ones, at least.

Your risotto crab cakes look so simple to make, easy to savour & tasty too! :)

I absolutely agree..I never have leftover risotto;..but I can make some to try these treats!

Not much chance of leftovers on these either.

I love crab cakes! These look so delicious