Baked Polenta with Prosciutto and Fontina

Baked polenta is given some oomph with prosciutto and a little melted ooze courtesy of fontina cheese. Topped with a crispy sage piece, it dresses up polenta and goes out on the town. This is one of over a thousand recipes to choose from on Delia Smith's site Delia Online. 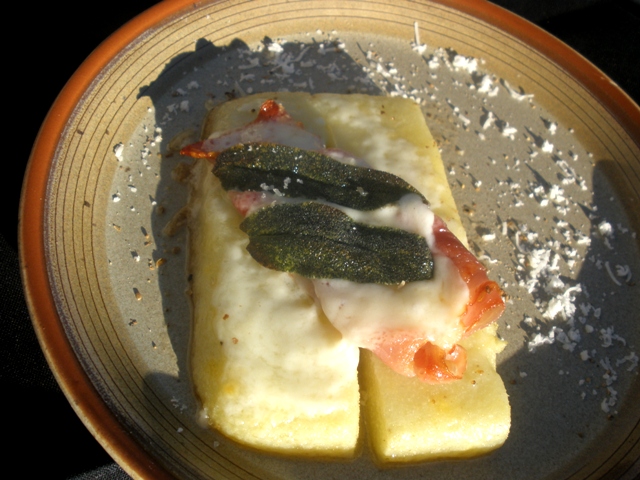 I have a tenuous relationship with recipes from England. There was a time (and what a time it was) that I studied in Austria and traveled widely and ... lived on $5 a day. I looked longingly in French restaurants and Austria's pastry shops. And then went to the market and got a baguette, a small piece of cheese and some fruit and that would see me through the day. I knew there was better food to be had. But I was 19, broke and in Europe! I woke up every day saying "I'm in Europe" and food was secondary to the adventure.

The only place where food did not beckon was in England. I was sated with Shakespeare's homeland and the history of the Plantagenets and the Tudors. I could shout out a credible history of the reigning families way before there was a TV series. (Yes, I am that much of a nerd.) Walks on English soil fed my Anglophile soul. A simple ploughman's lunch would take care of the rest.

For 40 years, Delia Smith has worked to change the perception of English food. Famous for her no-nonsense approach to cooking, she was won numerous awards and gained accolades through her many television shows and cookbooks. As you may have guessed, Delia Smith is #35 on Gourmet's list of women game-changers in food. She left high school at 16 - didn't even bother taking her exams and flitted from job to job. There was the odd year as a hairdresser, and then there the shop assistant year and later work in a travel agency. At age 21, she finally fell into the food world and never looked back. 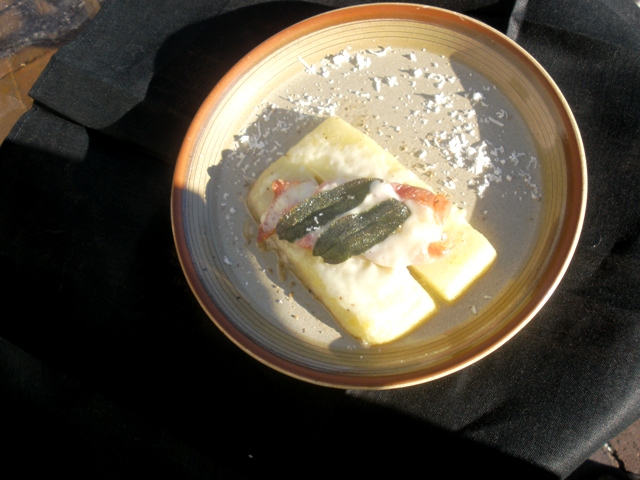 Her influence is huge. If she demonstrated an egg dish on her TV show, eggs disappeared off of grocery stores shelves. Once she caused a shortage of eggs! When she recommends a product - the product sells in a way they never did before - not unlike Oprah's influence. She is almost a corporation in her own right. Take a look at her website for the breadth of her recipes and the products she sells. Legend has it, she finally settled on cooking after her boyfriend told her to go to culinary school because she cooked so well.
(These days the boyfriend would be back asking for a percentage of profits because it was his idea!) Whatever you think of her recipes, she struck a chord in England and fulfilled a need before there was a Nigella or a Jamie. 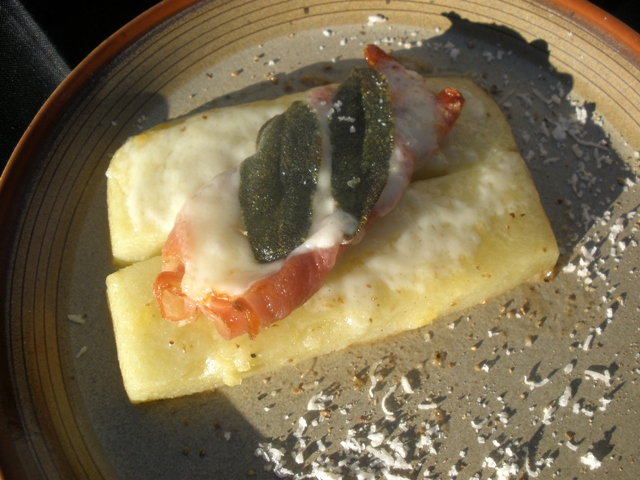 Smith does not feature "British cuisine." She looks for decent food - fairly easy and if there's a shortcut - she'll take it. For the Polenta appetizer, she recommended buying the prepared rolls of polenta you find in the produce section. I didn't - but that's me - you certainly can and I wouldn't blink an eye. I made a pot of polenta in the morning, put it in a loaf pan, refrigerated it during the day and then later cut it into rectangles and toasted it.

However you choose to do it - it's a soothing appetizer for February. I enjoy a dish that tempts me with creaminess, salt, crunch and a little chew all one plate. It teases with textures and hugs you with flavors.

Put the olive oil into a saucer. Cut the polenta into six ½ inch (1 cm) slices and arrange these on the baking sheet, side by side. Brush each piece with olive oil, season generously with salt and freshly milled black pepper.

If you're cooking for two they can be joined into threes; if not leave a gap in between each one, then place the baking sheet under the grill about 4 inches (10 cm) below the heat source. Time it for about 3 minutes.
Next loosely roll up the pieces of  ham and when the 3 minutes is up place a rolled-up piece of ham on top of each polenta slice. Next place a slice of cheese on top of the Parma ham and finally dip the sage leaves into the remaining olive oil and lay on them on top of the cheese. 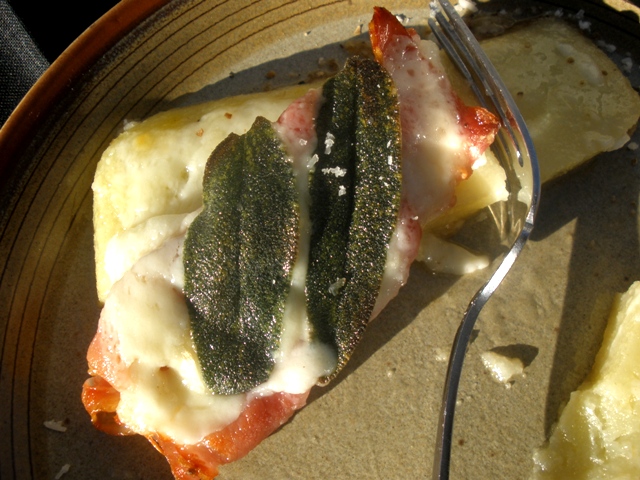 Next loosely roll up the pieces of Parma ham and when the 3 minutes is up place a rolled-up piece of ham on top of each polenta slice. Next place a slice of cheese on top of the Parma ham and finally dip the sage leaves into the remaining olive oil and lay on them on top of the cheese. Place the baking sheet back under the grill and give it another 3-4 minutes or until the cheese is bubbling and turning golden and the sage leaves are crisp.

I do think of this as more improvisation than a recipe. Grill or bake some polenta and throw on some toppings. What's not to like?

Please check out what the other bloggers are doing for Week 34 of Female Chef Gourmet Game Changers. And if you want to join in the fun, e-mail Mary at  One Perfect Bite. Mary started this delectable journey.

Everything about this polenta looks delectable, right down to those crispy sage leaves. Great write up!

I love the combo of flavors and textures in this dish. Great way to use up leftover polenta.

Claudia, thank you for such a wonderful post. You've mentioned living on a French baguette and cheese in France. Oh Dear, I want some of that freshly baked baguette that smell all over the farmers market! Well, back to reality, for the last three days I've lived on soft polenta (can't eat anything) and enjoyed it very much. I forgot how good polenta is! Thanks for the recipe, it looks delicious!

I love hearing your stories of your youth Claudia...I only dreamed of visiting europe- but you actually traveled there. What fun you must have had. This is such a wonderful post.
Your polenta looks so yummy-I think I'd enjoy this any time of day.

This looks awesome and yummy

Claudia, love this recipe. To me, fontina is the perfect cheese. What a great way to dress up polenta...the sage just rocks!

Claudia, I enjoyed your post! What a fabulous looking dish! It has made me very hungry! Have a nice weekend!

Oh yes this is a favorite of mine, the sage will make this even better, fontina melts so easy and just the right partner for this dish... love it... looks divine too!

Thank you, thank you for not using that packaged goop that comes ready-made that some people call polenta. This is so much better!! I made something very similar recently and will be posting it in a little bit. Nothing says yummy like melted fontina on polenta. Add prosciutto and you've melted my heart.

Okay. This looks amazing! Seriously, my stomach is growling over here. I MUST try this. I love the egg shortage story, I did see that somewhere. What influence!

What a great and novel way to present polenta, a glass of wine will be the perfect accompaniment,

Who would want to buy polenta when you can make it this way with the crispy sage leaves, Claudia? Wonderful. We all love Delia. Especially the cutting corners bits ;-)

I'm still new to polenta as I only had it a few times at a restaurant but not at home. I'm very curious how it tastes like with the sage leaves. This sounds wonderful Claudia!

Sage has become my favorite herb, since making Nancy Silverton's focaccia with onions and sage, and I can't get enough peppers. Your pictures are appealing!

Claudia, This looks so good to me!! I would just fine this comforting. Blessings my friend and have a beautiful weekend. Catherine xoxo

Polenta is so filling and satisfying, especially when it is smothered with cheese like this, Claudia! This looks so delicious!

What a lovely story you share, Claudia, both Delia's and yours! Interesting to note that Delia didn't teach British cooking per se but more so what sounded good to her. That is a fantastic dish you have there, btw!

Wonderful write up on Delia, Claudia!
And super recipe choice. I love polenta and fontina melts so beautifully. The sage leaves are the perfect touch!

I agree what's not to like!!!! Deli is an institution and it was fun to find out more about her.

The polenta looks delicious. No doubt English food gets a bad rap but, its changing.

Your polenta looks so put together, the last time i made mine, it was crumbly and difficult to cut...yours certainly looks so much better and delicious!

I'm with you - a little bit of crunch, chew and salt, is always nice :)

By the way, I love your profile picture, you look like an interesting woman on the go!

This sounds delicious and your description of it set my stomach growling. I've bookmarked this and hope to try it next week. I'm curious to taste her take on this. Have a wonderful weekend. Blessings...Mary

This reminds me of a recipe that Delia might have had on holiday, loved, and brought back to share with her Brit fans ... I can see this appetizer sitting on a plate with a robust Italian wine sitting beside it at a small courtyard farm restaurant in the Italian countryside ... ah, Europe, my right arm to return!

Thanks for making me yearn!

If Delia had it in Italy - the polenta probably didn't come in the prepackaged cooked polenta rounds she recommends...

I never heard of Delia before! You are introducing me to lots of new and interesting people. The polenta is mouth-watering! If I had everything I would be making it for a midnight snack.

Can you believe I have only had polenta once? I'll have to pick up some more and try this version.

My husband loves prosciutto. He would be all over this Claudia.
Sam

Claudia I made your Orange Tart yesterday and it's up on my blog today---thanks for the inspiration!

Claudia this looks amazing. I really like all the componets to this dish.

Another great tribute my friend! And this dish does look delicious, love polenta and new ideas for preparing it :)
Hope you are having a wonderful weekend :)

OK, Claudia, this is the most appealing polenta I've ever seen! Such wonderful flavors...thanks to both you and Delia~

Georgia | The Comfort of Cooking said...

I love the combination of flavors you used for this stunning dish, Claudia. It looks so delicious and full of flavor. Thank you for sharing!

I had a piddly little salad for dinner. THIS is what I want!!!!

What a scrumptious combination! Fontina is so delicious.

Polenta is one of Italy's gifts to the culinary world! I have never baked polenta, but we always fry it on Christmas Eve when we traditionally serve it with a hearty Italian stew. This recipe sounds absolutely tremendous! I love your story of your priceless time in Europe on less than $5 a day. My sister is just like you -- I walking encyclopedia on English royal history. But I was one of those who had to watch a portion of English history through the "Tudors"! Your posts are superb, Claudia!