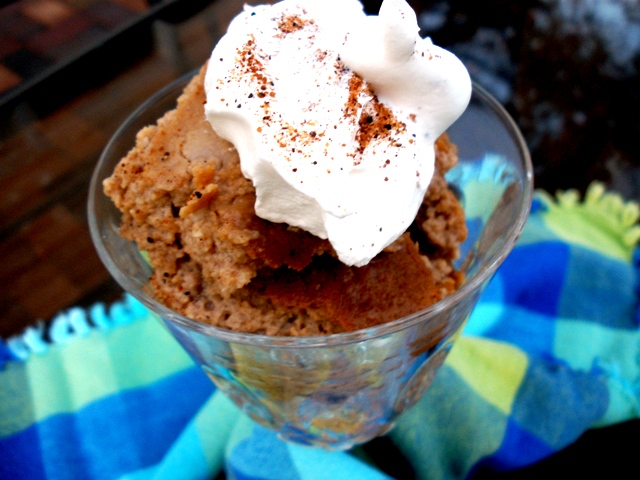 I may be a water sign but when autumn comes, I am from the earth. I remember bags of roasted chestnuts bought for me on city streets in New York as a girl. My feet were decidedly marching on cement and asphalt but as I munched on the now soft, pliable chestnuts, the earth's crust was never far from me. I still look at piles of fallen leaves longingly. Do not think raking has any allure! I simply want to jump in and feel its warmth and crispness. And while I have become far too sensible to bury myself in the remnants of summer past, I will sit and kneel in blankets of leaves and hope that a rodent doesn't peek out at me!

Warm, soft chestnut pudding will do this to you. It's a romp in a pile of leaves. A hug from the earth. This recipe is from The Rose Pistola Cookbook- a restaurant in San Francisco's North Beach neighborhood. Settled by immigrants from Liguria hoping to strike it big in the California Gold Rush, the recipes in this book combine the bounty of the Italian Riviera with the goodness from the Pacific Ocean. The cookbook reads like fiction and nourishes you to the end. Combining tales of the people who populated the neighborhood as well as the history of the dishes, the book gives a warm embrace to North Beach. And there's none of the "American-red-sauce" mania that swept Italian-American cooking (not that there's anything wrong with that - I was raised on red sauce!). 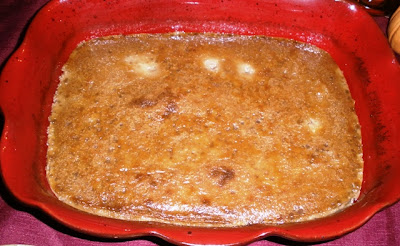 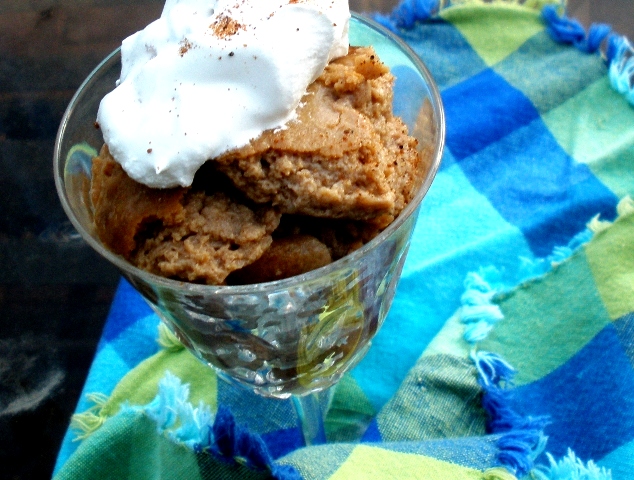 It looks a wee bit like pate - all that dense, crumbling brown! Interesting that things that smell of the earth - look like the earth! Aromatic - it announces autumn. Soft and pliable but hints of caramelized honey for surprise. It's a dessert planted firmly in the earth.

But I will have it on my Thanksgiving table. Next time, I will use a pat less butter (it just didn't need it all) and a smaller gratin dish (which will up the cooking time) to have thicker slabs of it. And you can make it ahead of time. It's delicious cold the next day or simply rewarm before serving. 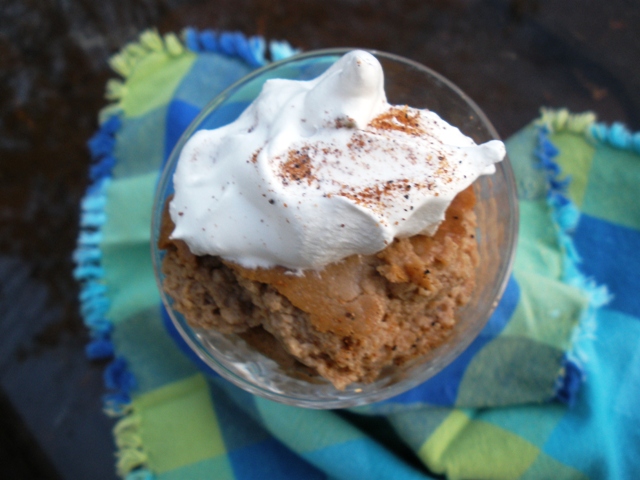 Rose Pistola Restaurant owner Reed Hearon noted in the book, "This pudding is something like an Indian pudding. Its flavor and texture actually comes from the flour." See? Perfect for Thanksgiving.
*I ordered the chestnut flour online from Sausage Debauchery.

This sounds absolutely awesome... I dont remember them selling these in bags in upstate ny but in big barrels in old Italian speciality stores, we would buy fava beans, chestnuts, so much fun back then boy the memories. I just love this recipe and everything about this.. wonderful post Claudia!

Delicious! I just love the sound of this!

Interesting recipe. It looks delicious. I am saving this, thank Claudia :) Have a awesome week.

I so needed this recipe to appear in front of me today, and you obliged! I will be forever in your debt...I am making a chestnut tart tomorrow and I see so many recipes calling for TONS of sugar -- I love that yours is not quite so sweet, and that it uses honey. Claudia, you're a star! Theresa

You know what made me rush (yes - RUSH) to read this post even though I have a to-do list as long as my arm? The title. Warm, soft, chestnut. Seduction in three words, right there.

I feel like my mom could have written the first paragraph. Hot roasted chestnuts was one of her favorite things about winter in New York.

Certainly sounds like a very warming kind of pudding....lovely!

Claudia, chestnut pudding? Never had a chance to try this....sound and look delicious, it sure reflects autumn.
Hope you are having a nice week :-)

Claudia, the pudding looks earthy and out of this world delicious!

I've never heard of chestnut flour before but that pudding sounds amazing. Eating roasted chestnuts as a family on Christmas has been a tradition since I was a little girl so I hold that nut near and dear to my heart. I guess I need to find chestnut flour.

This looks awesome...now, to go find some chestnut flour...

new to me looks divine

Dear Claudia, Chestnuts are part of a holiday when I was growing up. My mom and dad used the make the cross on top of the chestnut and roast them. They were served after dinner as part of the nuts and fruit that came before the pastries, cakes and other goodies. I never heard of this pudding. It sounds wonderful. Thank you for sharing. Blessings, Catherine xo

Thanks for the tip on where to find chestnut flour...as I'd love to try this delicious looking dessert! What fun memories you shared of eating roasted chestnuts...I think that needs to be added to my bucket list :)

This is so weird - I put Indian pudding on my recipe list just yesterday! I love the idea of using chestnut flour! Ooh and chestnut honey. I'm in love.

Claudia,
We adore chestnuts in our house and I love using chestnut flour in pancakes and cakes but never seen this before. This pudding looks scrumptious - and you have saved me just in time: my Corsican beaux-parents are arriving tomorrow so this is a must for the table!

I LOVE the subtle sweetness of chestnuts but have to admit, I've never baked with them before! This chestnut pudding sounds like the perfect place to start.

i can't wait until chestnuts come in our locals stores...but chestnuts flour I have to look for it..never saw it before..very interesting recipe, and got to say that I love it!

What a luscious looking treat. I've never had chestnut pudding but after looking at your pictures and reading about your girlhood memories in NY and this pudding, I have to try it!

Ya know... I've never tried chestnuts because I was never sure what to with them other than the typical roasting. This recipe makes me want to go hunt up some chestnuts RIGHT NOW. Sounds amazing!

roasted chestnut, how can anyone forget (besides the chestnut roasting in an open fire song haha) i guess the smell is indelible. Sounds definitely earthy Claudia.. it's fall comfort indeed!

We have to have roasted chestnuts at the end of every family or holiday meal from Autumn through Winter, Claudia, and the addition of this dessert other times of the year would be wonderful!

When I was in San Francisco recently the aromas of Italian food cooking in the North Beach neighborhood stayed with me all day..so delightful!

The other day, Hubby looked at me oddly when I mentioned that one of the things I missed about letting go our home was amongst other things...raking the leaves and rolling in their crisp. He certainly doesn't miss the labour!

Chestnut flour is an ingredient I plan to experiment on, especially since I bake a lot of gluten free desserts. This one sounds like an interestring way to begin. Thanks for the heads up on the butter ;o)

Have a great weekend.
Ciao for now,
Claudia

I love the way you write about food and about your memories. This post is so evocative, I could practically taste the chestnuts (even though I didn't grow up eating them). Thank you!

This sounds SO delicious - so glad to have found your blog thro Rosemary and Thyme - love the title and your recipes. I'm signing up to follow and looking forward to more!
Mary

What a perfect dessert. I love puddings and I love chestnuts. This one has my name on it. I hope you have a great day. Blessings...Mary

Hi Claudia, Just stopping by to say hello and thank you for the visit. It is fun and just nice to visit with all of my blogging friends. You are all so nice. Blessings, Catherine xo

Chestnut flour is new to me, the pudding looks special! somehow I missed your Farro-Bean Soup from Lucca post, Claudia. The soup is similar to a bean and barley soup I make. Makes me want some savory oatmeal as a side dish too!

This looks just delicious...what a perfect fall dessert. Thank you for making my Friday a little bit brighter. You are a blessing! I hope you have a wonderful weekend.

This is beautiful, Claudia. I think I've only ever had chestnuts once in my life...but I always dream of having them roasted on an open fire (no joke). And funny you should say it, because I am the exact same way...water sign who feels very rooted in the earth come autumn!

Claudia
I love chestnuts and always wanted to use the flour for something other than castagnaccio. I think I found the perfect thing.

This chestnut pudding sounds so inviting and perfect for this time of year. I do not cook much with chestnuts, but you have me adding them to my shopping list.

I love the sound of chestnut pudding...warm and soft. I need to cook with chestnuts, thanks for the inspiration.
LL

Hey Claudia!
I made this tasty dessert in a dinner party & tested it first myself & it was a huge success! You taste the flavours really wel so a big thanks to your wonderful creation!

It's sad, but I've never had a chestnut before. I bought a bag of fresh ones today and I was wondering what I should do with them. I don't think I could grind them into flour. But Maybe I could do something similar, this does sound wonderful.
-Gina-

I have a feeling that I'm missing out on something great here. I've never had chestnuts, nor have I ever seen them in the market. This pudding looks incredible though and has me thinking that I simply must seek out some chestnuts. I'll have my eyes peeled...

I have chestnut flour...I am so excited now :) I have never had chestnut pudding before and this looks so delightful! Love your warming description :)

This looks wonderful, Claudia, and would be perfect for Thanksgiving!