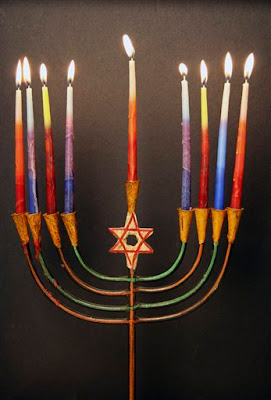 Photo by Ray Kugler, Associated Press
`
I didn't want today to rush by without wishing you a Happy Hanukkah. While the Festival of Lights is considered a minor holiday for the Jewish people, it has such a beauty of spirit - the rededication and the menorah's light in the darkness has always moved me.
`
My memories of childhood Hanukkah's spent at my friend's table are everlasting. Much has been written of the Jewish-Maccabean victory over the Syrian-Greeks in 165 B.C. But Hanukkah is not about a the military victory per se but about the rededication of the Temple and the miracle of the oil. Read more about it here. 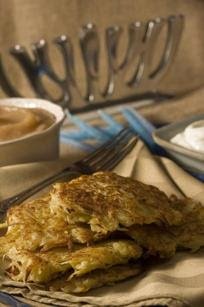 Photo by Larry Crowe, Associated Press
Because of the significance of the miraculous oil, the Hanukkah table is graced with foods fried in oil. Hanukkah favorites are the latkes. Below is a listing of latkes for all tastes: the traditional, the sweet, the fruit, the oven-baked, the gluten-free.
`
Apple Latkes - Smitten Kitchen has a sweetly-spiced version of latkes complete with a decadent caramel sauce

I usually opt for the traditional - I have a traditional gene that affects my choices. Not surprisingly, tonight I will be making the Zucchini-Parmesan latkes. Happy Hanukkah!

wow pretty impressive, its such a coincidence today I posted on my facebook what these candles were for since the supermarket has them on sale everywhere. So I had no idea, and here I come to you site and got educated immediately. Until today, I never realized how much other cultures do, that I have no clue about. The latkes youve posted is another one of those things I never heard of or had. So bonus! I would really like the zucchini parm ones! Very nice post!My sisterinlaw is jewish, but never practiced it I guess, she has never talked about this. The closest I ever got to jewish foods were noodle kugel lol thanks for the pictures and schooling today

I never realized that ther were so many ways to make latkes. Last year, I found a recipe that used parsnips and carrots. My husband said he liked them. This year, I asked him if he wanted me to make them again or potato laktes. His response,"Potato Laktes!" I quess he just might prefer the traditional way.
Happy Hanukkah.

I can never seem to get enough Latkes. Eating them is reason enough to celebrate. The orange and vanilla one is new to me. Sounds delish.
Sam

I watched a Martha Stewart rerun on the Hallmark channel today and she showed the cookbook author of the "2nd Ave Deli" Cookbook, Sharon Lebewohl, making their famous potatoe latkes, pink applesauce and chopped liver. My mouth was salivating the whole time!
Although I'm not Jewish I grew up eating latkes and chopped liver -- it must also be a Brooklyn thing! :)
I'm going to try making them out of sweet potatoes this year...yum!

I used to get my latkes from the back of a truck in Queens. It was a Brooklyn guy acctually and he was quite famous for selling them on the street - the health code was not up to par but the latkes were delicious!

Happy hanukkah! I like the sound of the baked sweet potato latke. It sounds like a nice twist.

Great post. I adore latkes (especially with a Mimosa). Don't even want to guess how many Weight Watcher points they'd cost, lol.

I have already added the Zucchini-Parmesan Latkes to my recipe file...Thanks Claudia!

Well you got me with the sweet potato latkes! Although zucchini and parm sounds pretty awesome too! Happy Hanukkah!

Zucchini parmesan latkes sound good but I also like thesweet potato and gluten free ones. Thanks for all the links.

I love potato latkes served with a dollop of sour cream,and as the French say,"tu me donnes le gôut" to make some.

What a wonderful selection of recipes! I do love latkes, and that sweet potato recipe sounds amazing.

Latkes are irresistible. Wouldn't you love to have a tasting menu of all those different latkes?

Thank you Claudia for sharing all this very moving and spiritual info with us.

The links to the latkes variety is a welcomed roundup ;o)

Flavourful wishes and Happy Hanukkah to our Jewish friends ;o)

I never knew there were so many ways to make latkes! I have never made them myself, but the ones I have had were delicious! Thanks for sharing all the links to the delicious recipes!