I received an exquisite package in the mail from Bertolli Foods last week. 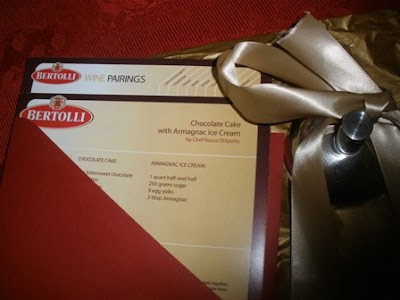 Wrapped in red and gilt-gold, I discovered a gift card inviting me to purchase Bertolli frozen meals. Accompanying this was a wine aerator (I had never used one before) and a beautifully wrapped envelope with recipes developed by Rocco Dispirito which could accompany my meal. The meal was to coincide with the unveiling of Bertolli's webisodes: Into the Heart of Italy. The trailer was to make its debut during Desperate Housewives on Sunday eve. As someone who:
`
a. does not watch TV
b. does not cook frozen meals
`
- this was an intriguing opportunity. Because it was Sunday dinner, I felt I had to make some sort of effort. I put out Asiago cheese with Sicilian olives and Caprese roses. 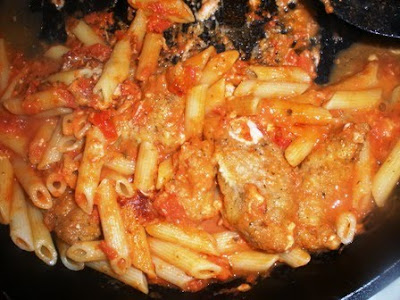 With the gift card, I purchased 3 skillet meals: Italian Sausage & Rigatoni, Chicken Parmigiana & Penne and Shrimp Scampi & Linguine. My college-aged children and my daughter's boyfriend were invited to partake of the festivities. With their time constraints and less expendable income, they are more likely to purchase a frozen meal than I.
`
The Chicken Parmigiana with Penne (pictured above) had mixed results. All loved the sauce, the penne came out al dente but the Chicken Parmigiana was soft and soggy. My daughter who is fussy about textures did not eat it. My husband, son and the boyfriend wolfed theirs down. Having non-shrimp eaters at the table, only three of us tried the Shrimp Scamp with Linguine. It was probably the least favorite. My husband and son did finish theirs. I wasn't wild about the shrimp - too translucent (it was cooked), too mushy and I felt the very strong garlic sauce overpowered the shrimp. I like my shrimp simply broiled, baked or grilled with cooked garlic. I feel cream sauces overwhelm the shrimp. So some of this is personal taste.
`
The garlic remained raw during the cooking process. There were large chunks of garlic that overwhelmed everyone's sense of smell and taste. After a few bites, my husband and son started putting the slices aside. 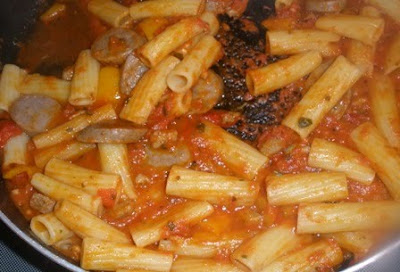 The Italian Sausage and Rigatoni was the hit of the evening. The 20-somethings at the table all declared that it would be a grand meal to have in the freezer. The rigatoni was al dente (which surprised me - I thought it would be softer). The sauce was a savory blend of herbs with the taste of the sausage. The sausage was firm. Not overpowering with enough spice to please all.
`
My husband and son ate hungrily and happily - stopping in-between bites to assure me that although this was very good, my from-scratch meals were better. Hmmm. I wondered. 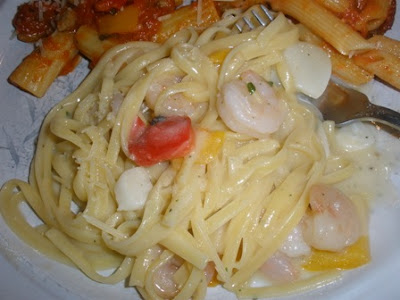 We did a taster's menu - 2 or three meals on each plate. The presentation of al dente pasta, vegetables and meat was pleasing. 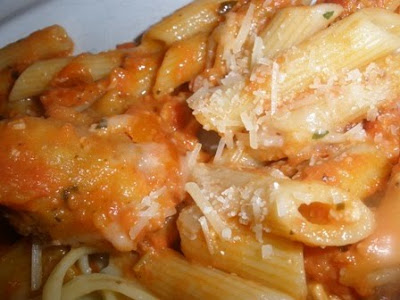 I was astounded that a frozen pasta dinner could yield al dente pasta - which it did in all three results. The portions of meat, chicken and fish were generous. 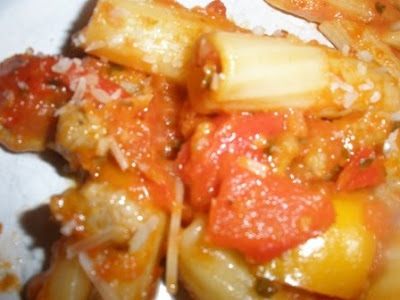 I found the meals for $8.39 at the local grocers. (I checked three grocery stores and the prices did not vary). The meals serve 2. All thought it a reasonable price. The rule of thumb for fast food is that your meal should be under $5.00. And this was much better than fast food. Cooked in a skillet for nine minutes, it was also faster than fast food!
`
We have since learned that Target sells these meals for $6.60 and that was the deal-breaker for the 20-somethings. They would definitely keep the sausage-rigatoni skillet meal in the freezer for an easy, flavorful meal. All were predisposed to trying other Bertolli meals. 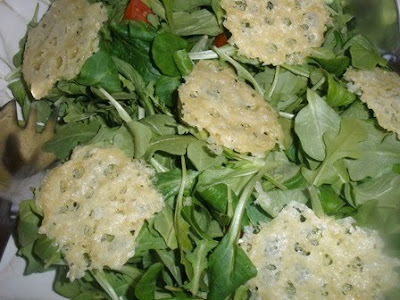 We rounded out the meals with some arugula topped with fricos and settled down to watch Desperate Housewives and catch the trailer to Into the Heart of Italy.
You could view the trailer here: Into the Heart of Italy
`
Bertolli Frozen Meals is getting ready to launch a new series of webisodes titled "Into the Heart of Italy: Six Adventures, Three Celebrities, One Mission. To Unlock the Secrets of Italian Passion for Food and Life." This one-of-a-kind online series will feature celebrity chef Rocco Dispirito and actors Marisa Tomei and Dan Cortese as they explore the food and culture of Italy.
`
I guarantee you that the video will have you saving your pennies for a trip to Italy.
`
I want to thank Bertolli for giving me the opportunity to try their meals. I am not someone who buys frozen meals and was pleasantly surprised. And while I will continue to cook my pasta dinners from scratch, there will be a frozen meal in the freezer for my busy children. With the gift card and aerator, I also received suggested wine pairings (also on their website) and recipes developed by Chef Rocco DiSpirito: Jump Asparagus with Oyster Mushrooms and Fresh Pecorino Cheese, Chocolate Cake with Armagnac Ice Cream. I will definitely keep those close!
`
The wine aerator opened up new possibilities. We have always scrambled when busy to make sure our red wines had time to breathe before serving. As we uncorked the Chianti and poured it into the aerator, the bouquet of the wine was instantly released. The aerator does indeed allow the wine to breathe without prep time. I will use it again and again.
`
I have fallen in love with the Bertolli website. With its suggestions on how to use their products, wine pairings and recipes, they provide a wealth of information. My children want to try Bertolli's lasagne ("but we know it won't be as good as yours, Mom.") What? Me worry?
`
And while there will now be a Bertolli meal in my freezer, I still won't watch TV.

Email ThisBlogThis!Share to TwitterShare to FacebookShare to Pinterest
Labels: Bertolli meals, Into the Heart of Italy

Wow, I would not have known those meals were frozen, everything looks terrific!

Wow amazing what you created with the bottled stuff! Old school in my family couldnt opt in for that one, you know what thats like to listen too! lol ....looks really good!

But you did watch Desperate Housewives. Lol I am glad you gave us the run down on the meals because they look so fantastic it would be hard not to think they tasted so too. Have to say I was surprised to see how well respected Bertolli was in Italy. Expected it to be the equivalent of a mediocre brand so to speak but even here it is the pasta and Olive Oil the Italians prefer the most!! Great Post!!

What a great review Claudia! I love that you had everyone over for a sampling of each. It sounds like you all had a great time tasting everything. I like to keep some frozen meals on hand for when my husband is home and I'm at work. Good to know you all really liked the sausage meal:D

Thanks for your honest opinion of those meals. Like you, I'm not one to buy frozen meals, but in a pinch, heck why not. Those fricos you made are my favorite thing on the post though.

Never knew this company had frozen foods. I'm very fussy about shrimp, but would definitely try the one with sausage on those rare occasions we eat a frozen meal. Thanks for the reviews!

You wouldn't say that they were frozen meals!!

Just look at that quality!

I will trust your judgement and taste test Claudia. I usually cook from scratch too, but may try the sausage meal! Enjoyed your post!

I'm with Linda on the fricos and the salad; that looks delicious! But, hey, if Rocco Dispirito had something to do with those recipes, they can't be that bad!

Great review - I'm still trying to take in the fact that you had non shrimp eaters at the table - how can that be? =)

The frozen meals look terrific to me. Next time I go shopping I will buy myself a couple of boxes.
BTW,I have an excellent giveaway going on at my spot. Come check my latest post if choice items like Le crueset Baking pans, platzgraff tortilla warmer etc etc might be of interest to you

The Bertolli meals look wonderful and because I respect your judgment I'll give the rigatoni a try. Have a great weekend. Blessings...Mary

I am not much of a TV watcher either, Claudia. I never bought frozen pasta dishes either, but I can see how they would come in handy for a busy family, or a college student living in a dorm.

I do love Rocco DiSpiritto and his quest to make healthy recipes! The aerator looks so interesting!

Cool...everything looks so nice and yummy!