Blessings on the Table 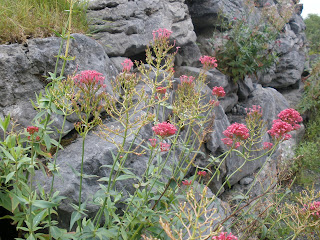 You find them everywhere. 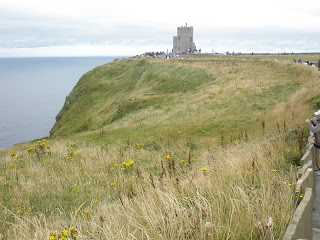 They lead you up the Cliffs of Moher.
`
Just before leaving for Ireland, I hosted the July Bon Appetit Cover Girl Dinner. I planned just a tad too much food (only a sampling is here. I left out the bread, the corn, the salads). And I wanted it all summery and breezy and pretty. Below is the plulot jam over goat cheese atop crostini. 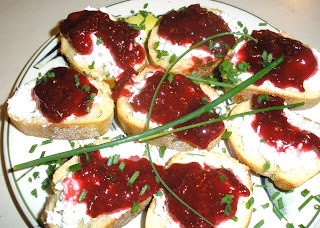 As I did not change or adapt the recipes, I am bringing you the links to them. The jam was easy and quick to make and was a burst of summer sunshine in your mouth. The goat cheese - the tang from the summer buzzings. Find the recipe here. Just scroll down. You'll make it again and again. 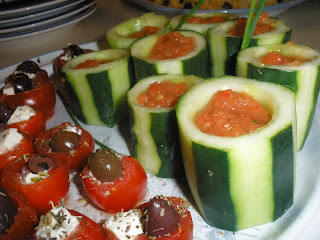 From Figtree Appetizers: Gazpacho in cucumber cups. How sweet is that? Visit her recipe: here. 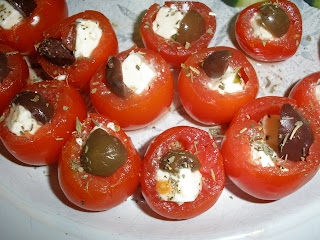 Marinated feta in cherry tomatoes. Now this, I adapted from Bon Appetit. The did have you make the marinade and marinate the feta yourself, but I always (shh) have a jar of marinated feta cubes for salads. I simply cut out the tomato pulp, stick in a cube of the feta and then put 1/2 a kalamata olive in each. They disappeared. I love it when my food disappears!
All the appetizers were small bites of summer. The blessings of the season.

And - tada! Bon Appetit's July 2009 Cover Recipe in all its glory. A summery recipe that is as good as it gets in July! This also did a vanishing act. 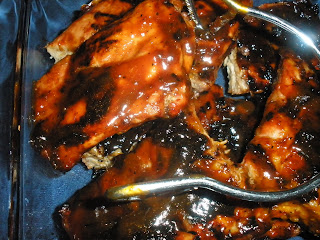 Find the recipe here. I did use less fish sauce than in the recipe and more ginger. Play with it - you know the tastes of your family. 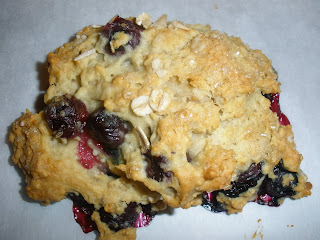 The first dessert was a blueberry oat scone courtesy of Molly Wizenburg. The recipe is here.
It's all sunshine, sweetness, tart and cream. I suppose some people would have it for breakfast ... but it moonlighted very well as a dessert! 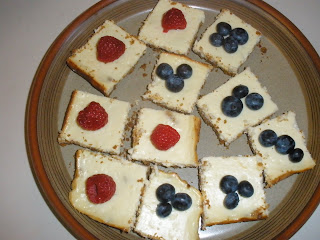 And some crumbly, cheesecake cookie bars! A sampling of the richness of cheesecake without the filling. The recipe is here. My children came home late and scrambled for some.
` 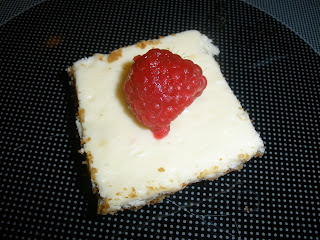 This was a grand summer meal. All tasted of the season. The month of July was spread on my table and I could truly appreciate the bounty of the month with each dish. I had a couple for dinner and we talked around the table. Me jumping up exclaiming, "Don't eat, don't eat! I need a picture!" (Imagine being asked to dinner, sitting down at the table and then told, "don't eat!") Great conversation (family, religion, politics, cooking, pets). The mind wandering as easily as the dishes were passed, Just the way a cover girl dinner should be. And then after partaking of all, we moved out to the patio with our wine and beer. And one more summer blessing. 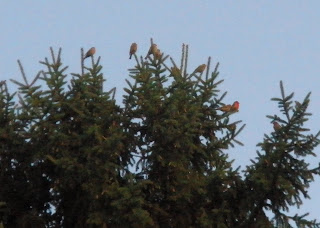 The finches gather on top of our evergreens to bid the sun good night. I miss July already. Another Cover Girl dinner turns to memory.

I had been wanting to try those ribs. Yours turned out great!