Food for the Soul: Historic Photos of Minnesota 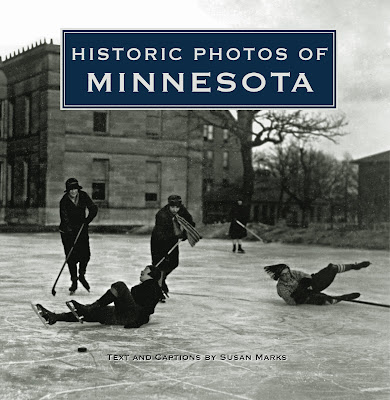 A few weeks ago, I was the grateful recipient of Historical Photos of Minnesota, published by Turner Publishing Company with text and captions by Susan Marks. Yes, this is a food blog but nourishment comes from all over and as a non-TV watcher (this horrifies my young performers), books sing to me. As a writer, books claim my heart. And as a playwright, historical photos evoke a time and place instantaneously. My husband and I have dragged our children to every historical sight in Minnesota, New York (my hometown) and across the country. There is nothing like a visual to jump start your interest in the human stories that accompany every historical fact.
`
The cover photo (above) is a grand way to discover Minnesota. For while it is the Land of 10,000 Lakes - at least six months of the year - those lakes are frozen! The photo depicting a hockey game outside Burton Hall at the University of Minnesota Twin Cities campus (1925) brings to life the amazing spirit of the varied populations who moved here and embraced the cold winter. Burton Hall still stands at the University of Minnesota. The University is huge and buildings from every era adorn the campus. My daughter is at the U and the commute to campus includes views of the Stone Arch Bridge (built in 1883 and now a footbridge), as well as the milling district of Minneapolis. It is a commute through time. All these sights are in the book. 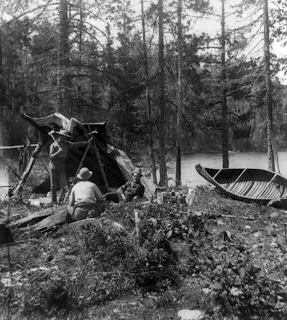 The above photo depicts hunters at a campsite along the St. Louis River circa 1890. The river flows into Lake Superior and to me this is vintage Minnesota. Minnesota's rivers and lakes remain popular destinations for many Americans. There are still pristine lakes protected heavily by the state of Minnesota. Whether people go to the lakes for hunting, fishing, boating or just to enjoy each other around the bonfire, the rich natural beauty of Minnesota remains a jewel to the people and they safeguard their wilderness.
`
Logging was a huge industry in Minnesota. The northern part of the state is heavily forested and over the years, forests were stripped of their trees. Photos showing log jams, lumber companies and lumberjacks loading felled trees on a sleigh are prevalent in the book. A few years ago, I did tours in Stillwater, MN which focused on the logging industry (and beer - but that's a different book!). Logging and mining was an ideal job for a new immigrant - for the work was physical and knowledge of reading and writing or even proficiency in the English language was not necessary. I did visit the iron-ore mines in Tower, MN. Taking an elevator 5 miles into the earthwas not for the feint of heart! And the sleeping bats we passed on the tour were not there for decoration! I closed my eyes and tried to the listen to the sounds of the men, peering into the dim light and trying not to think of the mass of earth above me. 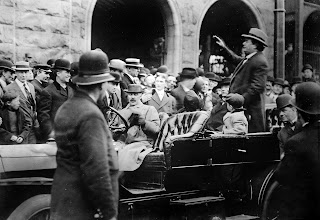 Ah politics! Some things never change! The above photo depicts William Jennings Bryan (a three time Democratic nominee for President). He had a grand reputation as an great orator but on this trip he chose not to speak. Later, he may have wished that he had. For Bryan lost his presidential bid to William Taft! Other photos of politicians (including one of William Taft) are included in the book. I do enjoy the photos of the politicians on trains - typically outside in the back of the caboose - standing and waving - in the cold. Hoping that's enough to win votes!
`
The delight for me in the book is that so many photos can be searched for in the state and found. Minnesota has not erased all its history with "new." Minnesota's "Grand Get-together" (the State Fair), Duluth's aerial bridge, the lock and dams on the Mississippi River, Minnehaha Falls (immortalized by Henry Wadsworth Longfellow in 1855), the State Capital, its rich array of colleges and universities, the beautiful lake destinations and so much more all remain.
`
I look at the people in the photos and am intrigued. Why is one group smiling and the other group solemn? Who were they? What happened just before the photo was snapped? Where did they later go? What happened to all the people gathered at the Grandstand in the Minnesota State Fair 1930? Who went to war? How did they fare during the depression? Did the polio epidemic later affect them? Who married the love of their life? Who was a published poet? So many people and each one is a separate story.
`
The book begins in 1850 and the last photos are from the late 1960's. Photos fluctuate from the Dakota Wars and all the sadness included therein to the struggle for the right for women to vote and then you turn the page and are surprised with a picture of children excitedly ready to frolic into a cool lake on a warm summer day. There's such a connection - the bathing suits have changed - the smiles on the faces of the children shoot to the present. The captions by Ms.Marks are wonderfully concise, informative, dated as accurately as possible and are set to show the evolution of Minnesota from a fur trade stop to the thriving state it is today.
`
As a die hard New Yorker who never thought she would live in "flyover country," the treasures in my adopted state continue to astonish and delight me. Historic Photos of Minnesota reminds me of the richness of its cities, towns, lakes, forests, rivers and valleys that lay just outside my door.

That was fun!! I always get a sense of nostalgia when viewing old photos...even if I'm not in them? Strange? Perhaps. That's okay... I'm easy, too ;)

I love your photos! I guess I'm a midwestern at heart!!!

Thanks for sharing love Minnesota!

Welcome!!!
http://foodcreate.com Stop By!!!
Sign Up for Our Newsletter!
Cents.Off Coupons

Have a Wonderful Day ~~~

I love old photos taken in all cities and states. They are time machines which take us back into the past.

Minnesota sounds lovely --I'd love to explore it one day!

What fun to read. I love old photos so I was charmed. I loved this post.

We love history and read a lot on our local region. Your book evokes nostalgia and a sense of pride in being a Minnesotan, and I've never even there! Great book and review. We would enjoy reading it.

That was fun & interesting to read, Claudia!

Your older photos are sop interesting. I love seeing pictures like that. I find it fascinating!

What a great book! I love looking at old photos and imagining what life was like at the time.

Another one who collects old histories, I have several on Cleveland. My mom came here in the early 1900's and watched them build the Terminal Tower downtown. Thanks for sharing these photos with us :)

I wish I could have lived back then! The world was a simpler place to be in back then! Love the photos!

Thank you so much for the wonderful and thoughtful review of my book. It was definitely a labor of love. Turner Publishing picked out the photos and then set me loose on captioning. I loved every minute of writing it.

By the way, I did try to get a little cooking in the book! There is a photo of a commercial shoot in the Pillsbury Test Kitchens, so I tried to include as much information as possible. However, I had to keep it under 75 words.

Again, thank you and now that I know about your blog, I will definitely be following you!

Very interesting post Claudia...not just of your state, but thought provoking in other ways...yesterday's people and their dreams...
Another thing that struck me was your elevator trip 5 MILES INTO THE EARTH...just thinking about it makes me nervous!!!

Thanks all for such a warm reception! I am very heartened.

Susan: I did edit a little more so people could be sure the captions were thoughtfully created by you. I noticed the Pillsbury cooking photo - but used the photos sent to me by Turner. I loved all the photos and could have written about all of them!

I'm a huge bookworm, but I never did learn to appreciate historical picture books!
how interesting and heartwarming! And you are such a good writer! :-)

Beautiful photos Claudia, and the history behind them.

Hello Claudia, it's been awhile ! Thanks for the visit. Yeah, I love old photos. They'll keep me wondering what is the stories behind them. But these days, children don't like history that much, I can say that!

Love the photos! It's so fun to look into the moments of life gone.
I read somewhere that people once believed that you should never smile for a photo??