The Italian Cook dishes up poulet

I no sooner finished my August Cover Girl dinner then I turned around and made a huge French dinner the following evening. Partly because it just dawned on me that in a few years I will be sixty and I am apt to get quite dotty. (I know - I've had fifty-something years to get used to the number 60 and I cannot. So I thought I would start practicing now.) I also had starving-graduate-student-son home for the weekend and thought I would feed him royally while I could.
`
I have a lot of herbs. They're calling to me. "Use me, use me. Why haven't you used me." All summer, it's been their plaintive soft cry but lately they've started to shriek. 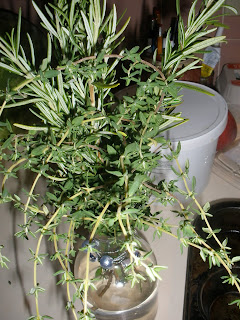 And then August Bon Appetit had some Julia Child recipes in honor of her birthday and there it was: Poulet Saute aux Herbes de Provence! Say that three times - with an Italian accent! So I picked my herbs (who became quite indignant after being snipped) and went to work. 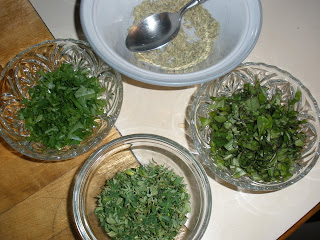 Below is my emulsified Provencal sauce. (I know the "c" has a squiggle - I cannot figure out how to do accents on blogger. Anyone know?) That sauce will make you salivate in a way Pavlov's dogs could not. For you are salivating for French food only. Laden with wine (but, of course!) and basil, fennel fronds (I actually have huge, honking fennel fronds). Anyone ready to book Air France pour moi? Oh dear. I hope eating French food does not make me pretentious. And the sauce is drizzled over these golden, succulent, sun-spiced chicken. (I need to go to the South of France now.) 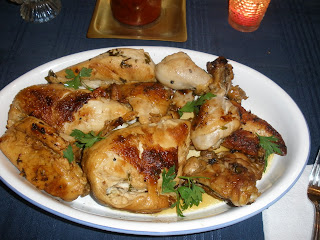 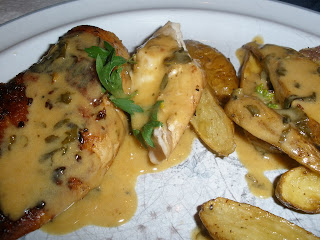 With some roasted potatoes, I do declare - I heard someone say, "It's good enough for company." 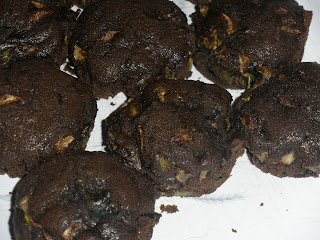 And because zucchinis are still plentiful, we ended the meal with chocolate zucchini muffins. From Barbara Bakes blog. There's nothing like getting a serving of vegetables in your dessert! Deep and rich, zucchini never had it so good. I sweat I tasted a touch of Nice in every bite. It's all French to me!

Claudia...the 60's are not so bad...honest! Your chicken dish looks soooo good to me!

That emulsified Provencal sauce looks amazing! I would love it with anything!

Claudia, I feel a bistro in the atmosphere just looking at your dish! They say 60 is the new 40, so no big deal!

I just have to make your Provencal sauce; it has me drooling! Your meal does look like a top shelf dinner. I don't think you could ever be pretentious!

It's just a number, Claudia. We traveled through Southeast Asia with an 86 year old. She did just fine. Your chicken look divine. Thanks for sharing the recipe with us.

Oh my goodness, Claudia, that looks so good! I'd want a big portion of mashed potatoes to sop up all that wonderful sauce.

My herbs are still going strong except for the basil which has gone to seed. I will have to try this soon!

My husband turned 60 this year and survived ... and has even flourished! I think I can make it and I'm sure you will too! :-)

Oh, I've had my eye on that recipe! It turned out lovely!

This was a great blog post Claudia!
Your chicken dish looks really delicious. No doubt that your son left back to school with a full belly.
I think it so cool that you do a Cover Girl Theme on a regular basis.

Great post! You are so wonderful. Glad to see that you are back on the rainbow. I missed your full of life posts. How is your ankle. Better I do hope. So, tell us please when is the next time you will be making this? I want to come smell and taste this dish.

That chicken looks unbelievable--the sauce is divine...with just about anything! Can't wait to give it a try.

Well it all just look heavenly right down to the chocolate muffins! I am so in love with the fresh herbs as well!

Those chocolate-zucchini muffins look divine; I could bite into one right now.

The provencal sauce is inspiring. The dish looks stellar. 60, to be, you are yet a spring chicken.

I work as an RN in a nursing home.. we dont consider anything under 80 'old'.

Coming up on 60? Really? All this time I figured you to be maybe 30 something. No kidding!!

Gosh, the chicken does look company worthy. I would be swimming in that gorgeous sauce!!

You know what they say about wine? It's only gets better with age. I imagine the same for you too! The chicken looks amazing and so do those rich, chocolaty muffins.

This poulet looks amazing, and what a great way to start to herald in an incredible new decade of your life. Congratulations on your upcoming birthday.

That looks delicious Claudia! I would love to make this... so I will.

You won't feel like 60 if you've a happy soul! So, what to worry about! Enjoy life and whatever you're doing right now. And what I'm enjoying now is looking at your pictures with all those delicious, mouthwatering food..yum! =D